Last Saturday, thousands of "Sone" (pronounced so-won), the fan club for Korean group Girls' Generation, gathered at Impact Arena to bask in the aura of their goddesses as the "Girls' Generation _ Girls & Peace" world tour hit Bangkok. Initial fears of the gig being cancelled were proved wrong _ and it was a blast. 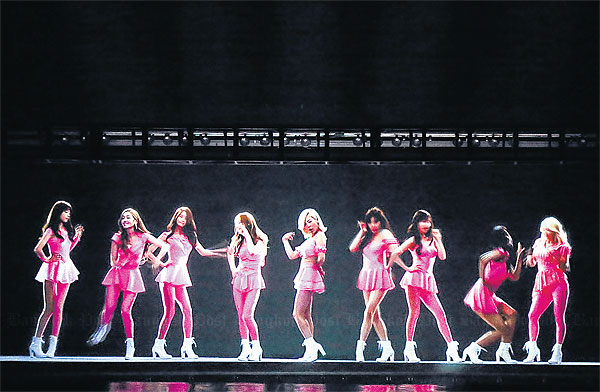 Like their previous concert in 2012, around 12,000 tickets were sold out in less than 10 minutes, and that meant over 50,000 Thai fans were left without. The priciest tier was 6,000 baht, and fans at the ringside were reportedly crying in rapture. The sold-out gig proved the band's continuing popularity among Thai Sone _ and the unabated wave of Korean pop-cultural exports _ seven years after the group's debut.

The wildly popular Girls' Generation, also known as SNSD, is a formidable machine of K-pop that has spread across the globe using the perfect formula: catchy choruses, easy-to-mimic choreography and, most of all their, stunning looks and bubbly personalities.

The nonet (Taeyeon, Jessica, Sunny, Tiffany, Hyoyeon, Yuri, Sooyoung, Yoona and Seohyun) stole the hearts of many with their cutesy dances and girlish charm. Over the years, they grew a sexier side as they flaunted their long legs with power-packed dance moves. The blend of coquettishness and sex appeal captivated all Sone around the world, especially in Thailand and other Southeast Asian nations.

As a twenty-something male, I didn't find it odd attending the gig. At the concert, I found all sorts of people, from teenagers to parents with kids in tow _ the band's popularity cuts across demographics. And the concert wasn't just for Thais.

"My wife, my son and I love Girls' Generation. And since I'm working in Bangkok, I wouldn't miss it for the world," said a Japanese man.

Kicking off their 150-minute concert performing their hits _ Hoot, Animal, The Boys and I Got A Boy _ the SNSD members greeted their fans afterwards by saying they had waited so long for this concert. Since they stuck to almost the same song list as in last year's Japanese tour, I felt a little cheated because that is still available on YouTube _ so this felt like a live replay. 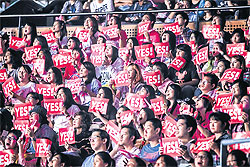 Fans’ loyalty is a big part of the K-pop universe.

The routine was also like a loop cycle. After a few songs, the girls needed time to change their costumes; using clips to buy time was the only way to do so as they slipped away. Both short films were great but provided no surprises.

There are, however, three things that make a Girls' Generation's live performance different from watching their recorded show at home.

First, the live atmosphere; second, the special effects; and third the "projects" by Sone, the fans, something that distinguishes the kind of loyalty and devotion to Korean idols from, say, Western stars. Nothing can beat the atmosphere of a live performance where you can shout, cheer, dance and sing along and most of all to see your favourite idol on stage.

"I don't understand what they sing but I can sing along. How weird is that?," said a Thai fan.

With fans waving light sticks all the time, it is a way to interact with the show. Not to mention the chance of seeing your idols in person, no matter up close or on the big screen, once they see them, they cheer madly as if they are ready to get a sore throat.

Then there were the special effects: hologram videos, fireworks, water fountains, flame-throwers, lasers, black lights and bubbles _ an overwhelming amount of them elevate most Korean concerts into an out-of-this-world experience and mesmerise the fans in the hall. Mixing them with all members on the stage singing and dancing as if they had consumed a truckload of energy bars, the concert's tempo barely let up.

Lastly, there are the "projects". These are elaborate pre-arrangements by fans to welcome their idols _ in the strange dynamics of the Korean pop universe, it's not just the stars who try to impress the fans, but the fans also try to impress the stars. At the Bangkok concert, Thai fans created a rainbow ocean of light sticks and cards that declared "ALWAYS HERE", which could best be seen by the performers on stage. These projects aren't cheap, and hardcore fans, besides paying for tickets, chipped in around 50,000 baht to make sure their idols will notice and remember them.

All 25 songs performed at the concert drew applause and cheers from the fans in the audience. Not just applause though, there were fans, both male and female, mimicking the dances. I witnessed this when a guy next to me grooved along to the song Gee and perhaps the only thing that stopped him from showing all the move was me noticing him.

The mutual affection and attempt to be loved is pronounced. The members of Girls' Generation, as usual, showered fans with endearing phrases: kid tung jang (I miss you), rak na jub jub (love you always) and chob kin tom yum goong (I like spicy shrimp soup) which made them even more lovable. Western artists usually make do with a sawasdee ka. The members also spoke through a translator, another addition we don't usually get in concerts, when they communicated something longer like talking about their new album. As a matter of fact, most Thai Sone don't understand Korean. Language is certainly not a barrier when it comes to idol worship.

The concert showcased yet more of SNSD's charms as well as an entertaining show. The members themselves exploded with energy, as they sang Say Yes, Dancing Queen, Mr Taxi, Paparazzi, Run Devil Run, Express 999, Genie and other tracks from both Korean and Japanese albums.

They lip-synced from time to time. But that was acceptable since the girls had to sing and dance for more than two hours, and that was a tough job.

Before the show ended, the girls said "Please don't forget to support us", while talking about their upcoming album. The crowd responded with another mad cheer, proof that this girl group are still hugely popular.

Thankfully, the Girls & Peace concert survived the current political turmoil and was not cancelled. By the end of the night, I left the stadium with fond memories of the girls' glamorous yet goofy side, humming the tunes of their hits. Korean pop will remain a force to be reckoned with for a long time. 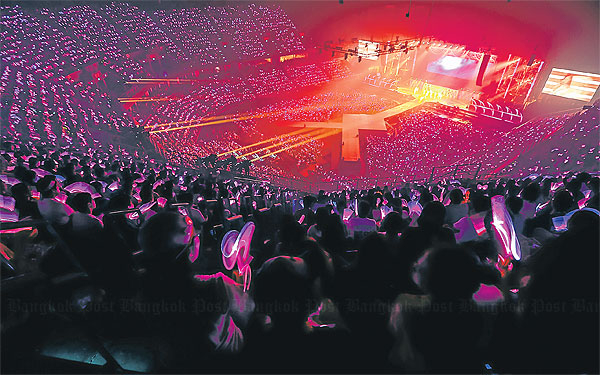 Lucky fans who got into the concert— 12,000 tickets were sold out in 10 minutes.