Making a movie for the small screen is a totally a new venture for Pen-ek Ratanaruang, who confesses that his sole attraction to the tube has previously been watching football matches. And that, he said, is something he can now do on his iPad. 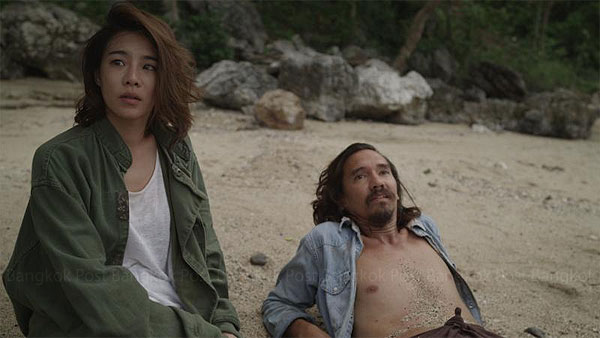 Cris Horwang and Nopachai Chaiyanam as Mook and Singha in The Life of Gravity.

Tomorrow night, the internationally-acclaimed filmmaker may have to play a couch potato as Raeng Dueng Dood (The Life Of Gravity), his first ever telemovie, premieres on TrueVisions Channel 45. The love story is meant to be a prime-time watch for Valentine’s Day.

The romantic comedy is the third original telemovie by TrueVisions, Thailand’s largest pay TV operator. At first the producer, Rasarin Tanalerttararom, asked Pen-ek to comment on the script. But his involvement broadened into directing the whole movie.

“I can only say what I like or dislike but I’m not keen on giving comments. So I told the producer that if she could find a substantial budget I would direct the movie for her,” said Pen-ek, who made his film debut 17 years ago with the genre-defying Fun Bar Karaoke, before moving on to helm several films such as Monrak Transistor, Last Life In The Universe, Ploy, and his latest, the hitman thriller Headshot. Pen-ek is considered a forefront of the Thai New Wave, which has helped thrust Thai cinema into the international spotlight since the late 1990s.

The Life Of Gravity sees him in a light-hearted mode. The romantic comedy revolves around a stylish, urban restaurateur called Mook (Cris Horwang), whose sea-faring trip with her boyfriend ends up with her becoming a castaway on a deserted island. There she meets the rugged, hermit-like Singha (Nopachai Chaiyanam), whose solitude and detachment surprisingly draw them together.

“This movie features only three human characters. I consider the rocky seashore location an important character that draws Mook and Singha closer, becoming dependent on each other,” said the director. “That wouldn’t happen if they were on a beautiful white sandy beach, which is described in the original script. Apart from this and adjusting the ending a bit, I didn’t change the tone of the story and followed the rest of the original script.”

Having worked with Cris and Nopachai before — they’re the leads in the director’s previous film Headshot — Pen-ek added that they are on the same wavelength, and that sped up the filming.

A film director usually enjoys (or endures) a longer period of shooting, as well as a bigger team and budget. For this telemovie, the budget was limited to 10 days of filming in a remote location at a navy base in Sattahip, Chon Buri, where Pen-ek and his team were like a group of castaways as much as the lead characters.

“Normally, we work eight to five like office workers when shooting a movie, which takes months. But we incredibly managed to shoot a 90-minute movie within 10 days, which was physically exhausting for us,” he said. “The intensive filming however brought a big burst of energy and commitment as we concentrated on completing the production within the short time frame.”

Moreover, the shooting depended on the tide and the weather conditions of the monsoon season. But as tough as it was, Pen-ek looks forward to doing more telemovies after The Life Of Gravity served as the first exercise for his production team.

“Closer shots are required for small-screen cinematography. There’s also an emphasis on the dialogue in fast-paced TV productions,” he said, highlighting the difference compared to making movies. “I’m new to this [TV] platform, and we consider ourselves students. Normally, I’m a slow-paced person, and I learned to think and act faster from this exercise.”

With the forthcoming digital TV that promises to change the landscape of Thai free TV in a few months, more film directors have begun to look at television as an alternative, if not a saviour, from tougher, high-investment theatrical film. For instance, Songyos Sukmakanant, another popular filmmaker, has turned his interest to TV and come up with a few hits, including the Hormones series, while Nonzee Nimibutr has directed several tube dramas for Channel 3. Pen-ek’s The Life Of Gravity, however, is a rare 100-minute made-for-TV movie, rather than a series, made by a top director.

After the filming, the editing process had the director questioning whether what he humbly calls a “student movie” would be successful in the ratings.

“We didn’t guess what TV viewers like to watch, and the editing was based on what we like to present, which is different from a soap opera with its extreme good and evil characters — phra aek (hero), nang aek (leading lady), nang rai (villain),” he said. “The plot appeals with a love triangle that TV viewers are familiar with but there’s more depth in the characters, in their thinking and problem-solving. Mook and Singha are like real people, and miracles don’t happen to them.”

TrueVisions had intended to release The Life Of Gravity in the cinemas after its television broadcast, but Pen-ek disagreed with the idea.

“I’m a craftsman,” he said. “Making a movie is one thing and making something for TV, you need different craftsmanship. And you can’t blow up what’s made for TV on a 40-foot movie screen.” 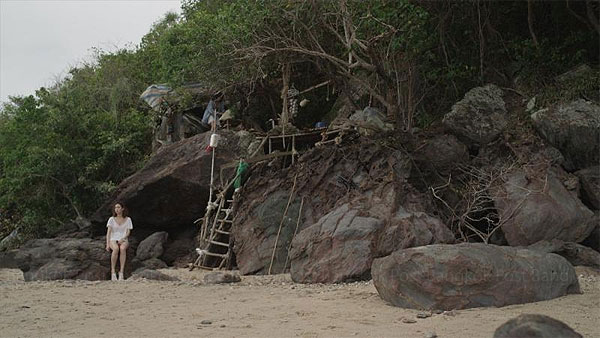 The rocky location, shot in Sattahip, is important to the narrative.