‘Art is a means and a possibility to be personal, provocative, reflective, experimental, independent and free. If I aim to satisfy the expectations of others, I would call that theatre or the production of illusions rather than art,” said Hungarian-Swedish artist, SI-LA-GI. 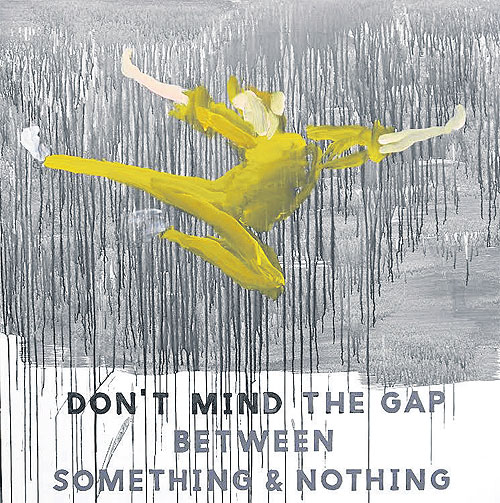 The Gap , inspired by the “Mind the Gap” warning signs on the BTS skytrain.

SI-LA-GI has collaborated with other artists since 1984. His interest in Eastern art led him to Thailand, where he met Thai painter Tawan Wattuya via Tang Contemporary Art Bangkok. They appreciated each other’s artistic concepts and decided to work together. Their first collaborative painting, Good And Bad, was completed in 2008, and their fourth collaborative exhibition, “Koans”, is currently on display at Tang until March 8.

The idea of “Koans” is to fuse Eastern and Western art with a touch of Zen Buddhism. One of the paintings clearly displays this concept — The Gap shows a figure meant to be Bruce Lee stretching his legs in a mid-air jump above the phrase “Don’t mind the gap between something and nothing”.

“Basically we have been working without words. We just use the visual forms of communication,” SI-LA-GI said.

He chose Bruce Lee, the famous martial artist, who represents power and tension, to break the limit between something and nothing.

The painting was inspired by Bangkok’s BTS warning (which was itself taken from the London Underground). SI-LA-GI was travelling on the train when he saw the “Mind the Gap” stickers stuck on every door. He interpreted it as a warning to mind the gap between life and death, or between life and art.

“Don’t mind you are going to die, don’t mind the failures. Just watch it like you are watching a movie,” he said.

Another painting that plays with this concept is displayed on the poster for the exhibition, on which a dog stands under a blue sky, the colour extending to and covering the dog.

“You can see the clouds in the sky, but when you fly through them, you find nothing there, just the vision,” SI-LA-GI said. This also represents the fact that “something is nothing”. The dog, painted by Tawan, sits calmly under the spilling sky. In a branch of Buddhism, if a person does something bad, they will be born seven times a dog, a tenet which invites audiences to interpret the poster in different ways.

Occasionally SI-LA-GI and Tawan invite other artists to participate in their visual discourses. There is no leading concept or organising principle, only visual communication and reactions to each other’s work, which change or redirect the form and content of the piece. Two paintings created with other artists are on display in the exhibition. One is a continuation of Tawan’s nude series, but the more interesting one, called Night & Day, was created through the philosophy of randomness.

Qiu Yuren, a Thai-Chinese artist who was born in Thailand, collaborated on the piece. He said the process used to create the painting was like playing a game, with the three artists taking turns painting on a black background.

Yuren was the first to paint. He wanted to create something with a strong contrast, so he painted a few white-coloured strokes. Tawan then expanded on the white colour, painting the form of soldiers holding firearms. They also painted deep-coloured shadows, which look like a burst of sand, over the heads of the soldiers. It perhaps represents the power of the army and how they can set off a storm — something observers of Thai politics know well.

But in Zen Buddhism, everyone should have hope. So when his turn came, SI-LA-GI painted a few straight lines that form a box.

“You can imagine it is a door or window to give you hope from the dark side,” he said.

We can only hope he’s right. 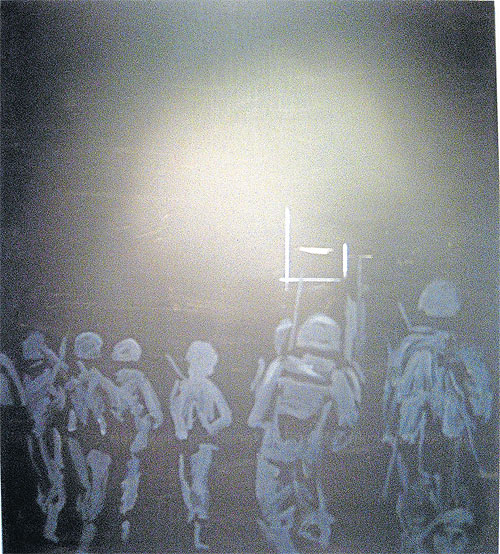 Night & Day, in which three artists took turns painting on a black background.