BSO plays with passion and aplomb

Once again in very fine form, the Bangkok Symphony Orchestra (BSO) commenced its 2014 “Great Artists Concert Series” on Feb 25 at the Thailand Cultural Centre with Korean/German violin soloist Clara-Jumi Kang and distinguished Venezuelan guest conductor Carlos Izcaray. The main attraction of the programme was the beautiful and delightful Mendelssohn Violin Concerto In E-Minor, with 26-year-old Kang exploring the luscious sonorities of the violinists’ favourite challenge exquisitely with the aid of the magnificent 1725 Guarnerius del Gesu “ex-Moeller” violin (on loan from the Samsung Music Foundation Korea). 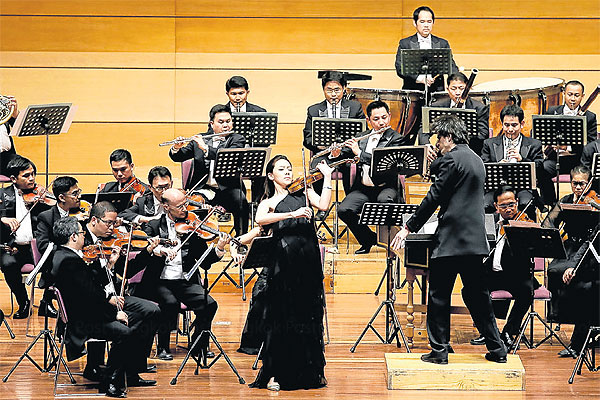 Her effortless and fluid technical facility worked its way through a note-perfect interpretation, coaxing out of this famous del Gesu as silky and seductive a tone as one could wish for.

Once a student with Zakhar Bron and Dorothy Delay — two of the biggest names in violin pedagogy — Kang possesses a truly authoritative command of technique, coupled with a highly sensitive musical sensibility, and these two facets combine happily in her reading of the Mendelssohn — mellifluous in the slower cantabile passages but exuberant and often fiery in the bravura sections. Meanwhile Izcaray kept the rhythmic ensemble between soloist and the BSO tight and stable throughout, not least in the finale where Kang set a noticeably faster tempo than is traditional. With lightning speed semiquaver passage work as clear and crisp as hers, however, the orchestra was able to follow all fluctuations within the phrasing, leading to a rousing conclusion. The audience was suitably thrilled and cheered with approval, calling her back to the stage numerous times.

The concert began with Bach’s Orchestral Suite No.2 In B-Minor, BWV 1067, in which the assured soloist was the BSO’s own principal flautist for some two decades now, Worapon Kanweerayothin. Particularly famous for its infectious last movement Badinerie, this whole seven-movement work was paced very tastefully by Izcaray, who has a reassuringly calm and controlled presence on the podium, as it progressed from one time signature and tempo to another. The reduced string section responded with often heart-wrenching moments of harmonic tension and release and then contrasting sections of light-hearted playfulness as they interacted neatly with Kanweerayothin, who also played through all technical hurdles with poise and a keen sense of baroque style. All of this was aided further by the constant cembalo accompaniment provided by harpsichordist Sasipa Rasmidatta. Section leaders enjoyed a solo spot in the minuet, while cellist Kittikhun Sodprasert delivered a clean continuo line in the polonaise.

After the interval Beethoven’s fun-filled Symphony No. 4 In B-Flat Major provided plenty of opportunities for this orchestra to show off its admirable credentials, and Izcaray structured the four contrasting movements most convincingly. The hushed opening violin phrase of descending minims always reminds of the start of a later Romantic symphony — Mahler’s Titan — but when the sedate Adagio gives way suddenly to the explosive opening of the Allegro Vivace a mind-set of sheer irreverence is set on its course, an indication of what was going on in Ludwig’s life and thinking around 1806.

Izcaray made this transition most effectively by holding the first full tutti fortissimo tantalisingly longer than usual, thus building up an intense energy like a wound-up spring which was then released into the movement proper, one which is based on ceaseless rhythmic propulsion.

The exquisite and carefree second movement adagio featured some fine cantabile phrasing in the first violins, whilst the trio sections of movement had some lovely principal woodwind playing.

One of Beethoven’s telling quotes is: “To play a wrong note is insignificant… To play without passion is inexcusable.” This particular finale’s frenetic semiquaver scurries are the perfect case study for such an enlightened attitude, for whilst some inaccurate notes are almost inevitable at the breakneck speed that Izcaray sets, the BSO ranks were nevertheless encouraged to play with aplomb and bravado in those fiendish passages.

The smiles of the audience across the auditorium indicated that they had fully received the composer’s intended message of uncomplicated joviality after another accomplished BSO performance.