From Tokyo with love

After successful concerts in New York, Madrid, Paris, London and Singapore, the Tokyo Philharmonic Orchestra added Bangkok to the list for its 100th Anniversary World Tour 2014. Japan’s oldest symphony orchestra, the Tokyo Philharmonic was established in 1911 at a small kimono shop in Nagoya and is now regarded as one of the leading orchestras in Japan. The orchestra’s actual centennial celebration was cancelled three years ago after the 2011 tsunami. On its last stop on the first world tour in the history of the orchestra, the Tokyo Philharmonic Orchestra offered an exciting and breathtaking performance at the Prince Mahidol Hall, Mahidol University in Salaya, Nakhon Pathom on Mar 23. 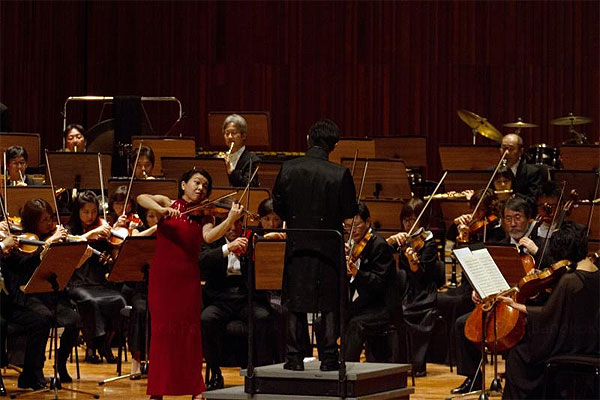 The Tokyo Philharmonic Orchestra’s performance at Mahidol University was breathtaking.

The concert started and ended with works from the 20th century. Toshiro Mayuzumi’s Bugaku was the first piece on the programme that captured the audience’s attention right away. Next to Toru Takemitsu, Mayuzumi is probably Japan’s most famous composer. Bugaku, a ballet in two parts, was commissioned by George Balanchine in 1962. “Gagaku” refers to the type of “refined” music used in Japanese courts, and “Bugaku” is a type of Gagaku used in dancing. From the dissonant, jagged sounds of the opening, played with absolute precision and transparency by the first chairs in the violins and violas, to the massive orchestral climaxes, Mayuzumi’s style is in debt to Messiaen, who was one of his teachers. It was an absolutely intense, engaging performance of a complex and rather challenging work. 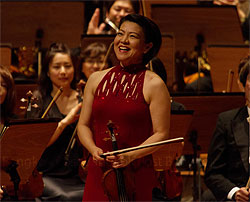 Next was the Tchaikovsky violin concerto. Violinist Kyoko Takezawa offered a unique performance of a piece that was once deemed unplayable. There was a charming, lyrical, almost hushed quality to her playing. Takezawa has a unique way to draw you into the music when she is on stage. She and Maestro Oue were engaged in a dialogue throughout the concerto. The orchestra was sensitive to every change in dynamic and reacted immediately to the slightest request by the conductor. Takezawa has said that like many Japanese musicians, she owes a debt of gratitude to the Tokyo Philharmonic Orchestra. It was the first professional orchestra she played with after she took gold at the Second Quadrennial International Violin Competition in Indianapolis in 1986. Following the concerto, Takezawa created a calm atmosphere in the encore, an arrangement for violin and piano, with Maestro Oue on piano, of October, Chant D’Automne from Les Saisons by Tchaikovsky.

The second part of the programme opened with excerpts from the Romeo And Juliet ballet by Prokofiev. The orchestra offered a very passionate performance of the piece with fiery outbursts of energy. Maestro Oue was demanding but subtle at the same time, never forcing the sound out of the orchestra.

The orchestra was very accurate and solid in fast energetic passages, but lyrical and delicate in the rather softer passages. The strings offered a variety of sounds and emotions and the winds and brass followed every gesture and request by Maestro Oue while matching and not overpowering the rest of the orchestra.

The last piece was Leonard Bernstein’s Symphonic Dances from West Side Story. The contrast in sound and character that the orchestra displayed was quite extraordinary. Maestro Oue engaged with the orchestra in such way that it was pure joy to watch. Their Mambo was brash but compelling while their Somewhere showed elegance through the beautifully shaped string solos which was delivered with great ease and a hint of portamento that was just spot on for this piece.

After thunderous applause, an uplifting excerpt from Yuzo Toyama’s Rhapsody For Orchestra, with an outstanding flute solo resembling the shakuhachi flute, was offered as an encore to the very appreciative audience who showed their involvement by clapping along with the music. 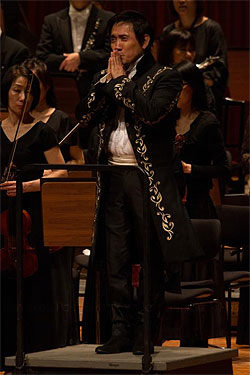