Last week a video clip went viral. It features a mock interview with a Westerner who recounts his first experience of being cursed at by Thai people. Deftly using comical expletives and po-faced humour, the clip clocked up one million hits within 24 hours. At the end of the five-minute video, called BKK 1st Time, the clip reveals itself to be an advertisement for a new book, a lighthearted piece of non-fiction written by a Thai student. The gist of the matter is that this publication, entitled New York 1st Time, is to be launched at the 42nd National Book Fair, the country’s largest annual gathering of booksellers and readers, which is currently under way at the Queen Sirikit National Convention Center. 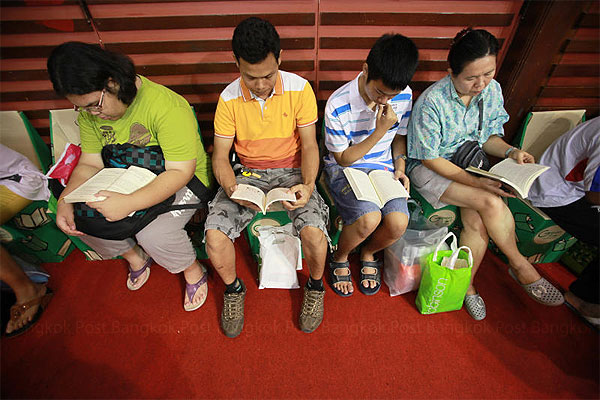 “It’s hard to quantify, but that clip has really got people talking about the fair and has perhaps even attracted extra visitors,” says Charun Hormthienthong, president of the Publishers and Booksellers Association of Thailand (Pubat), the fair’s organiser. “It’s created a buzz, which social media has helped spread very effectively, especially among younger people.”

Such praise from a titan of the industry reflects a major issue confronting Thai publishers at the moment — the complex and ever-evolving relationship between online media and the well-being of the publishing sector. Back in January, Charan expressed concern about the irresistible pull of social media and the toll it had taken on the book market, saying that young people now have less time for books. But the Pubat president’s recent appreciative comment about social media’s ability to generate buzz is in line with the attitude taken by many Thai publishers who have been skilfully exploiting Facebook and the blogosphere to sell traditional ink-and-paper books. Instead of seeing online society as a competitor, they are harnessing its capacity to boost sales, connect with readers, facilitate marketing tactics and even harvest new materials for book deals. All of this applies, of course, mainly to a young — read, teenage — demographic.

Drop into the jam-packed Queen Sirikit Center over the next few days — there have been more than a million visitors to the fair since it opened last Friday — and you may notice  that some of the busiest booths are those manned by publishers who have learned how online outreach can scoop up young readers. A few publishers are also doing brisk business in books that originated as blog novels penned by teenagers, some of these amateur scribes having built up a huge following, mostly among members of their own peer group. The intersection between physical books, Facebook and online phenomena is something that the publishing industry is still trying to understand — and master.

“We use social media as a public relations tool, but we also see other opportunities in it,” says Natchanon Mahaittidon, editor-in-chief of Salmon Books, the publisher who came up with the viral Bangkok 1st Time clip and who has already put out several books penned by popular online writers. “We’ve been making video teasers to accompany the launch of each new book; this one just happened to be the most successful. But it’s more than just PR. I think the use of the web and Facebook can foster relationships between our writers and our readers. We can make the writers appear ‘more real’ — more accessible — to the readers.” 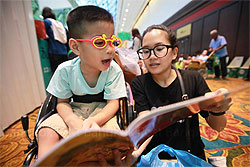 Salmon Books assigns microblogs to each of its writers in order to encourage more communication with their readership. In two months’ time, it will activate a new project called Mini Wall, an online content market where instalments of a larger text will be offered for a small fee. And the facility will be open to virtually everyone. For instance, a novice author could let people read the opening chapter of his/her first novel for free, then charge 5 or 10 baht, say, for access to the second chapter, and so on. In short, a way of flogging “e-chapters”, not necessarily the entire e-book. This approach, Natchanon thinks, would be consistent with the reading habits of Salmon Books’ young target audience who consume words morsel by morsel, rather than devouring whole chunks at a time.

As many avid readers around the world contemplate migrating from physical to electronic books, Thai publishers see the profits to be made by going in the opposite direction. Salmon Books, again something of a pioneer in this area, is known for harvesting writing talent it spots online which it views as an effective way of transforming small, web-only sensations into bigger, mainstream hits.

“Sometimes I approach writers, inviting them to publish with us, simply by going through their Facebook posts,” Natchanon explains. “For instance, I asked Kanchat Rangsrikarnsong to write for us — his first book was about K-pop groupies — because I liked his witty status posts. Another writer, a young woman called Tuna, got a comic-book deal with us for the same reason, and because she already has lots of followers online. Generally what I look for when I’m browsing through my Facebook timeline is to see whether the posts I like could be expanded into book-length material. If I think there’s a possibility, we go for it.”

This isn’t a new trend, of course. The most glittering web-to-book success story belongs to Sataporn Books, a specialist in the teen romance and fantasy genres (its stall at the Book Fair always seems to mobbed by young fans). Worapan Lokitsatapon, MD of the publishing house, says he’s brought out over 100 titles in the past seven years all sourced from material originally written for online consumption. Sataporn’s biggest hit to date is Cubic, a suspense-laden drama about a Thai woman up against the Hong Kong mafia. What started out as a blog novel has crossed over and morphed into a real-world phenomenon. The text itself has been reprinted over a dozen times and the story has now been adapted for a TV series.

“Blog novelists are mostly in their teens,” Worapan observes, “and they write stories driven by the same ambition that makes people take part in singing contests — in order to become superstars, to break out onto a far bigger stage.”

“We have editors who follow what’s popular online, and we have dozens of young writers approaching us every month. I think there’s still lots of good material being written online, so this trend is sure to continue. In that world you have a large number of young writers coming up with all kinds of plots; it’s limitless! As publishers, we can see the potential in expanding from that.”

Jamsai Publishing is another company that has hitched up to the online bandwagon. This popular publishing house is also credited with jump-starting the trend towards “light novels”, those lovey-dovey, romantic fantasies populated with wide-eyed girls and aimed at high school readers. Jamsai places a great deal of importance on connecting to its fan base, says its director for marketing communications, Somrudee Uboldejpracharak, and it maintains five separate Facebook pages in order to cater to the specific needs of readers ranging from an average age of 12 all the way up to 22. And many of its writers are not much older than the readership they attract; one of Jamsai’s authors started publishing stuff when she was only 13. Now 20, she has hung onto her original pen-name, Jao Ying Pu Ler Chom (“The Fair Princess”). Over the past few past years, Jamsai has run an online writing contest via the forum website dek-d.com. Called “Nak Kian Nar Sai” (“Fresh-faced Authors”), the competition requires participants to post their efforts online and the verdict on their stories is decided by a popular vote — a model similar to that used in reality-TV shows. The winners’ texts are then published in the “Love Series”, a self-explanatory category. The entries that scored highest in the most recent dek-d.com scribe-fest were the detective story/romance Jinx, a romantic suspense tale called The Murder Of Love and the romantic comedy Guy Girl Gay (their titles summing up their content quite adequately).

“While we reach out to readers and potential writers online, the Thai market is still very much a paper-book market,” Somrudee notes. “On the web, we create a society which our readers and writers can join. On the web, too, is where we believe a lot of new writers can be discovered.”

In other words, digital self-publishing now enables practically anyone with the requisite skills to cross over into the pen-and-ink sector and become “real” authors, even if they haven’t yet celebrated their 18th birthday. Obviously, we’re not talking about bona fide literature here. The growing popularity of the “light novel”, the fluffy, featherweight romance, over the past five years — spurred on by the writing of blogs — has raised eyebrows in some quarters and given rise to the criticism that Thais aren’t “quality” readers.

The appropriation of blog novels by big publishers is clearly driven by the ready-made fan base rather than any editorial considerations about the intrinsic quality of such texts. Some players, like Salmon Books, explain that they don’t lift entire Facebook posts verbatim and make them into books; that they expand on and modulate the original themes and styles. Other publishers, however, believe that web novels which many adult readers might dismiss as pointless nevertheless have at least one major benefit: they serve to exercise the imaginations of young readers.

As the National Book Fair continues to lure huge crowds, with four days left to go, Charun of the Thai Publishing Association has mixed feelings about the dynamics between social media and actual bookselling.

“We’ve managed to draw the people using all these social media tools, but it’s hard to say whether that will translate into sales,” he says. “In Thailand, we’ll keep on selling paper books because e-books won’t take off very quickly here. And I’m not worried about young people reading romantic or super-light books. As long as they keep on reading, everything’s fine. I’d only start getting anxious if they were to stop reading altogether.” 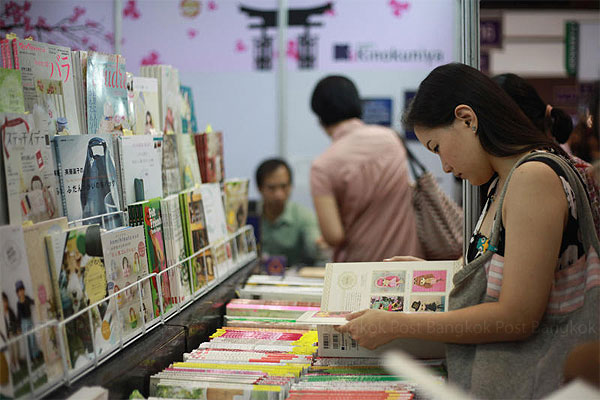 A world of knowledge comes to life

Get back into the team spirit with Asics