The confidant of kings

He was the sole tutor of two Thai monarchs — King Ananda Mahidol, Rama VIII, and HM King Bhumibol Adulyadej. In Switzerland in 1936, Cleon Seraidaris, a lawyer, started guiding the young King Rama VIII and Prince Bhumibol towards their educational goals. Up until his death in 1997, his close ties and devotion to HM the King and the royal family of Thailand remained strong. 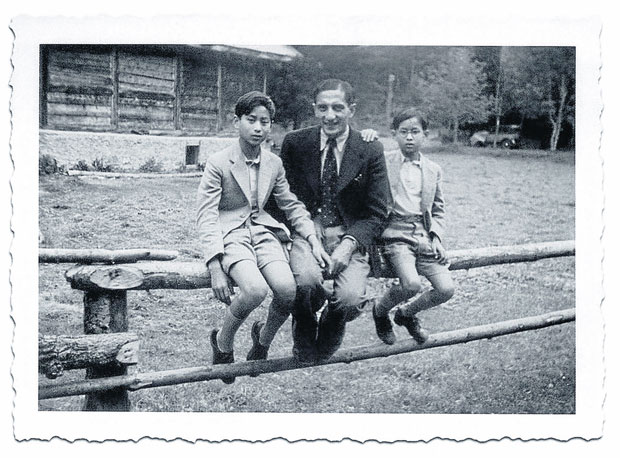 The two kings with Cleon Seraidaris at Champex, Switzerland, in 1937.

“My father said his career was like a dream because the two kings were perfect about everything. The kings had to be perfect in every way to rule the country. This could be seen from their behaviour and understanding of their duties,” said Lysandre C. Seraidaris, the youngest son of Cleon. 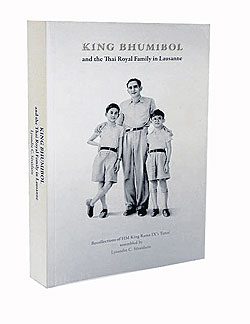 The English version of the book King Bhumibol And The Thai Royal Family In Lausanne is available for 999 baht, only at Asia Books’ booth at the National Book Fair, which ends today at the Queen Sirikit National Convention Centre. For information about the availability of the English version and the Thai version (699 baht) in the future, email information@asiabooks.com or contact Asia Books Customer Service at 02-251-8571.

“They behaved like kings. They were good students. They were dream students to my father. They were enthusiastic to learn.”

The honorary trade adviser to Thailand’s Ministry of Commerce was talking about both kings during last week’s visit to Thailand to launch his book, King Bhumibol And The Thai Royal Family In Lausanne, which has been translated from French to both English and Thai.

Using a narrative technique that traces the chronology of events in his father’s life, Seraidaris interweaves the story of his father’s teaching days and his esteemed work as the tutor of two kings. His father’s rare photos, personal letters and documents also complement the text and give the book a sense of historical weight. Simple yet beautiful writing makes it easy for readers to learn more about Thai history, incorporated well in a foreigner’s biography. The book reflects the lives of the two monarchs and the royal family after the 1932 revolution and during and after World War II.

“It was a reason to write about what was not known in history before. His Majesty suggested that I write about my father. This book focuses on the royal family, but I started by introducing my father,” the author said, “He [the King] knows he can trust me. I’m like my father.” From this book, readers will learn new aspects of both kings’ childhoods, education and viewpoints, especially how they coped with the dramatic changes of their youth and prepared themselves to become monarchs.

“They had only one tutor. When they first met, the children liked my father very much and understood the meaning of education. He was educating them,” said Seraidaris.

When Cleon first met the Siamese king and prince in 1936 in Lausanne, King Rama VIII was 11 years old and Prince Bhumibol was nine.

According to Seraidaris, the philosophy of his father is that you should learn at least one thing every day and education is the key to the future. 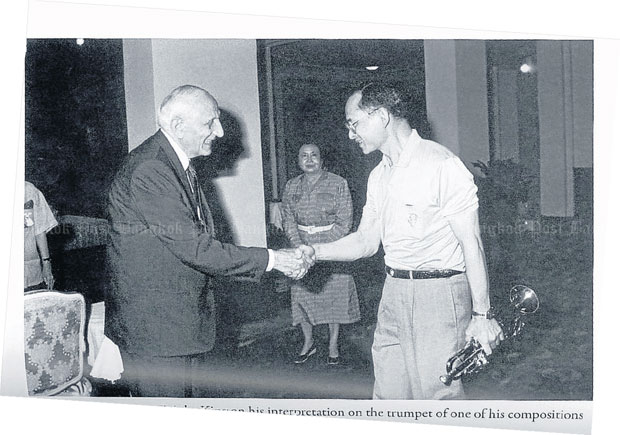 His Majesty the King and his tutor Cleon Seraidaris met again in Bangkok in 1988.

The author wrote about the two kings’ childhood, education and hobbies in the book: 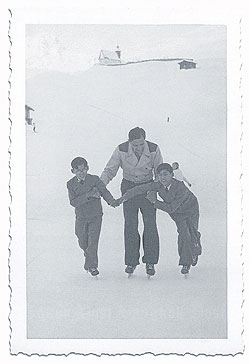 Tutor Cleon Seraidaris taught ice-skating to the young King Rama VIII and Prince Bhumibol, who would later be HM the King.

“Cleon’s duties were especially gratifying as both his charges were bright in their studies and, despite their youth, behaved responsibly beyond their age. They were conscientious students, while fully aware of the often heavy future responsibility of kingdom and leadership inescapably assigned to them. Both boys, king and prince, had shared talents, unaware that fate’s hand would write for each a different history.”

“Outside school, king and prince were encouraged into sports: cycling, tennis, table tennis, ice-skating ... Ananda was invincible at table tennis and difficult to keep pace with at cycling. In winter the entire family, staying in the mountains, took pleasure in skiing.”

In September 1938, the young king and the prince temporarily returned to the Kingdom and sent letters to Cleon regularly.

One of these letters proves both kings’ sense of humour and good ties with Cleon. In the letter dated Nov 27, 1938, King Ananda Mahidol wrote: “We are not suffering from heat, but from mosquitoes. Here is a specimen killed by The Monkey [The Monkey is a member of their imaginary “Patapoum Club”]... BE CAREFUL INSIDE THERE IS AN ANIMAL. DO NOT LET IT FALL ...”

Seventy-five years later, there is still a mosquito squashed between the two pages, with a warning in red ink and in capital letters.

By the beginning of 1939, the royal family returned to Lausanne and restarted their daily life with Cleon. King Rama VIII was interested in legal studies while Prince Bhumibol chose science, which he always preferred. 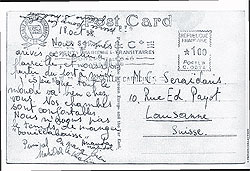 That period was during World War II, however, the studies set by Cleon at Vadhana Villa continued uninterrupted. Sports, excursions and cabinet-making were added. The prince excelled in making small pieces of furniture and particularly superb model planes and Thai warships.

In December 1945, King Rama VIII, who had turned 20 in September, returned to Siam for his coronation. In his letter dated February 11, 1946, King Rama VIII wrote to Cleon that he would have to stay longer in Siam until the opening of parliament and the revision of the constitution. He mentioned the situation in Siam during the war and an underground movement.

“There are huge domestic problems: high inflation, prices have increased ten times, then a hundred times. There are large numbers of thieves and gangsters ... Clothes are lacking ... This is what the country lacks most because food is abundant ... Damage caused by bombing is rather small compared to that on Germany ... Disorder prevails in the palace ...” 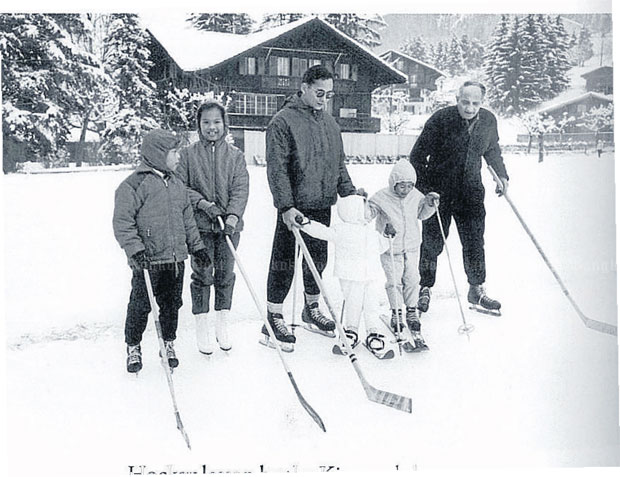 Cleon and His Majesty the King taught the royal children to play ice hockey. 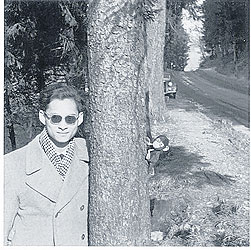 The royal couple in Lausanne.

In May, a newspaper in Lausanne reported that the King of Siam would return to Switzerland to complete his studies. However, a tragedy happened on June 9, 1946 when King Ananda Mahidol was found dead before dawn.

“Princess Mahidol fainted when she discovered the body of her son ... It was therefore by telephone that Princess Galyani told the terrible news to Cleon who, in shock, felt overwhelmed by grief,” read the book.

On June 29, 1946, King Bhumibol, who had just acceded to the throne, wrote to Cleon, expressing his gratitude for his encouraging letter.

On August 19, 1946, the royal family returned to Switzerland. As soon as he arrived in Lausanne, the King set aside science to study law.

Cleon gave the highest priority to new tasks related to legal education for the King and he had no time available to defend his doctoral thesis. Later in 2003 when HM the King and the author met in Bangkok, the King said that he had never forgotten his tutor’s sacrifice and that he retained a deep sense of gratitude toward him. 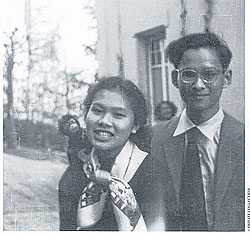 The royal couple in Lausanne.

Between 1946 and December 1951, the King travelled to many European countries to establish relations and contacts with a number of European monarchies and republics and also with political personalities. Sometimes, he travelled incognito.

The book also mentioned a serious car accident experienced by the King on October 4, 1948, while he was driving his favourite Fiat Topolino to Geneva. The King suffered concussion and was shortly transferred to a private clinic in Lausanne and would become better acquainted with his future Queen, MR Sirikit Kitiyakara who had rushed from Paris to his bedside.

This book compiles a number of rare photos capturing the romantic love of the royal couple during their engagement and before and after their marriage.

In the spring of 1950, the King returned to Bangkok for his wedding on April 28 and his coronation on May 5. He continued to write to Cleon. The King and the Queen later returned to Lausanne to enable him to finish his studies.

Cleon was not only the King’s private tutor but also a personal adviser. “My father remained adviser to the Princess Mother and the King after their return to Thailand until he retired,” Seraidaris said. 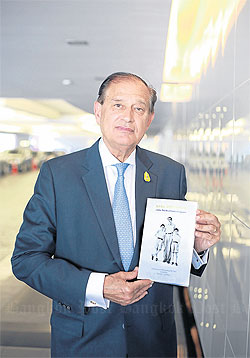 The latter part of the book involves HM
the King, the Princess Mother and Princess Galyani’s work. The author highlights the King’s extensive journeys across the Kingdom and the royal projects.

“The part about the King’s work is for Swiss people. They are extremely honoured to know about the links between Lausanne and the royal family. This is also for Thai people,” the author said. “I think it’s important for the Thai people to know their kings were in Switzerland to study, not for holidays, and for Swiss people to know the same — that an exceptional king has been inspired by the way he studied in Switzerland.”