Three foreign musicians playing different instruments will be participating in a classical recital scheduled to take place in Bangkok early next month. 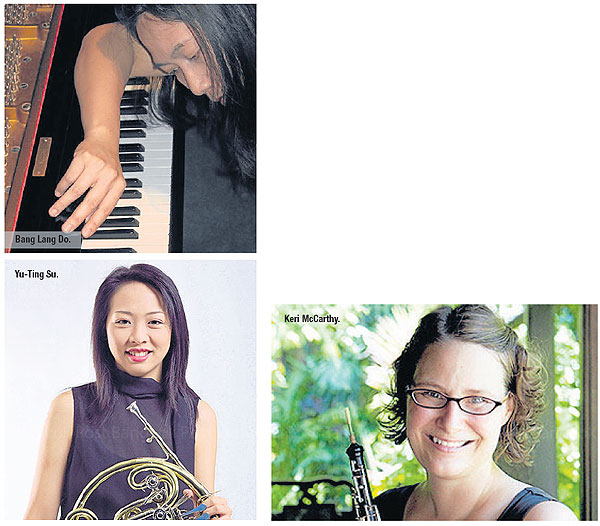 Presented by D&M Music Studio, “A Trio For Horn, Oboe & Piano” will see Yu-Ting Su performing on the horn alongside Keri McCarthy on oboe and Bang Lang Do on piano on May 12. The venue is the Goethe Institute, Sathon Soi 1, and the concert will begin at 8pm.

The programme will include Trio For Piano, Oboe And Horn In D Minor, Opus 61 by Austrian composer Heinrich Herzogenberg, Six Metamorphoses After Ovid by English composer Benjamin Britten, Etude No.4 (Fanfares) by Gyorgy Ligeti, who has been described as one of the most innovative composers of the second half of the 20th century, and Prairie Portraits by Patricia Morehead.

Yu-Ting is a native of Taiwan who earned a bachelor’s degree in music from the Eastman School of Music,
a master’s from Juilliard and a doctorate in musical arts from the State University of New York at Stony Brook. She has performed extensively in the US, Europe and Asia and is currently teaching the horn at the University of Northern Iowa.

McCarthy has been active as a performer and researcher throughout Southeast Asia. In 2011, she taught at Mahidol University after winning a Fulbright Award. She is currently a co-principal oboist in the Washington-Idaho Symphony and also performs in the Solstice Wind Quintet.

A native of Vietnam, Bang Lang Do graduated from London’s Royal College of Music and earned a doctorate in piano performance from the University of Montreal. She toured the US earlier this year, giving solo and collaborative performances.