Exposing the edges of society

The two exhibitions currently on display at the Bangkok University Gallery are completely different from one another; both in terms of form and subject matter. On the second floor is a series of photographic pieces exploring Cambodia’s Siem Reap, while on the fourth is an installation diary showing an artist’s experience in Bangkok. 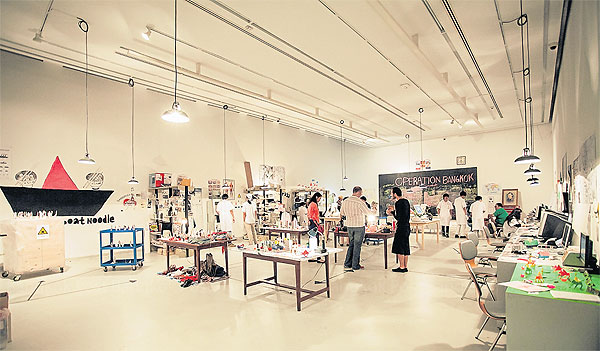 The fact that they are on show at the same time, however, is no coincidence. Miti Ruangkritya’s photographs from the “On The Edge” exhibition and Malaysian artist-in-residence Roslisham Ismail’s installation room “Operation Bangkok” form a dialogue, which has been carefully planned by curator Ark Fongsmut for about two years.

“I wanted to present this cross-cultural aspect,” said Ark. “I like works that give a strong contrast to one another. Miti’s photography is looking outside as a Thai, while the installation by ISE [Roslisham Ismail’s alias] is the other way round.”

Miti’s reasoning behind naming the exhibition “On The Edge” is quite literal, as most of the 27 photographs are of ends of dusty roads awaiting to be completed, or edges of swamps in undeveloped rural areas.

“We tend to look at Siem Reap as a cultural city, but Miti looked at it from the perspective of travelling to the end of the way, and looking into people’s ways of life,” said Ark. “On the surface, it’s hardly any different from Thailand, but I’m not looking at how the similarity might have significant meaning, I think more on the aspects that viewers can learn from.”

When looking at the photographs, one feels that there isn’t necessarily one common concept the photographer is trying to portray. Sometimes his subjects pose and look straight into the camera, as if trying to say something, while in some photos, Miti captures his subjects candidly, for example lovers during a picnic or a mother and her child standing by the road, looking towards the horizon.

There is no text accompanying each piece of work, which was always the curator’s intention, but it also makes it even harder to ascertain what the body of work is trying to convey. Is it how badly the city is in need of civilisation? Or is it trying to show the simple portrayal of people’s happiness and just the way things are?

“Sometimes we try to express that we know something even though we don’t really know about it,” said Ark. “Words can take it beyond what it actually is. I think these photographs can say it best themselves.”

ISE’s “Operation Bangkok”, meanwhile, is a laboratory-like room filled with different installations, drawings and videos. ISE recently had an operation to remove a tumour from his brain, and this, he says, is where his inspiration came from. His exhibition is an operation into his memories and experiences in the capital during his 45-day stay as an artist in residence. Instead of writing down his account, however, ISE used objects he collected and drawings and videos as his medium of expression.

“We started exchanging ideas about two years ago,” said Ark. “For the first week or two, I just let him travel to places he wanted to go. He visited places like Silom during Songkran Festival, the protest site, a noodle restaurant on a boat and more. It’s a diary written with drawings and things he has collected.”

On one table, there’s memorabilia from his day at a horse track and next to it were drawings of all the free food he got from a protest camp. There’s a photo of him being shaved in an old barber shop on the wall alongside some water guns from his visit in Silom for Songkran Festival.

“The collection of these little things cleverly shows the concept of an operation,” said Ark. “A conceptual work like this is not often found in Bangkok because we often question whether this kind of work is art or not. There’s always a question like this in this region because our understanding of contemporary art still exists in a limited space, but ISE is opening that up.”

"On The Edge" and "Operation Bangkok" are on show until Saturday, 10am to 7pm, at Bangkok University Gallery, Rama IV. Call 02-350-3626 for more information. 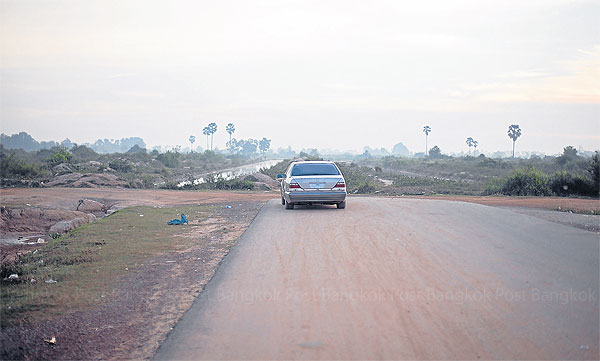