A man of arts and sciences
Life
Arts & Entertainment

A man of arts and sciences

Stepping into the Itsarawinitchai Throne Hall in the compound of the National Museum Bangkok, visitors may be stunned when they see the big changes there. Now, the hall is full of glittering thrones, royal chairs, palace decoration items, paintings, musical instruments and centuries-old books. This is the Fine Arts Department's special exhibition, "When East Meets West: A King's Treasure At The Front Palace", which will run until Aug 31. 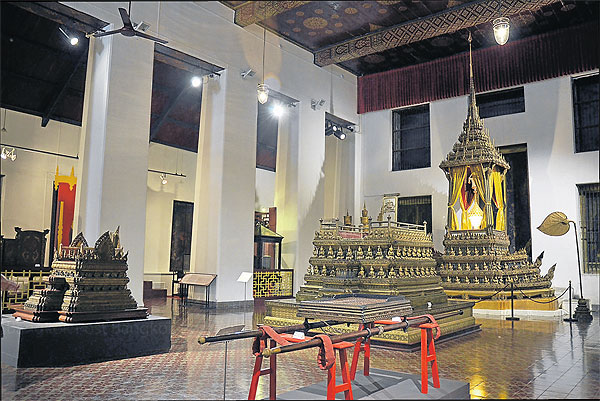 This exhibit tells of the life and work of King Pinklao, who was dubbed "The Second King of Siam" during the reign of his brother King Rama IV in the 19th century. It features 77 selected antiques and art pieces as well as a number of written documents and chronicles relating to the monarch.

The other displayed objects include furniture and accessories, some foreign leaders' tributary gifts, Buddhist prostrating clothes (pha krab) with the king's emblem offered to Buddha images and the king's musical instruments, such as xylophones and khaen (bamboo woodwind instruments).

An eye-catching and unusual display is the model of a royal horse dressed in gold ornaments and a saddle alongside the model of a trainer. The gold ornamentation for adorning the horse model is a formal-style display of the status of King Pinklao. The golden horse tack was used only by kings.

The exhibition comprises three major parts — "The King Of The Wang Na", "The Embodiment Of Eastern Philosophy" and "The Opening Of Siam To The Western World". An oil painting of King Pinklao.

The first section focuses on the biography of King Pinklao, starting from his childhood to becoming the Second King of Siam. He was born on Sept 4, 1808, as Chao Fah Chuthamanee at the former palace in Thon Buri. He was one of the sons of King Rama II and Queen Somdet Phra Sri Suriyanethara Borom Rajinee. He was the full brother of King Rama IV.

At the age of 24, he joined the military and took part in both army and navy tasks. He was recognised as a very knowledgeable and modern person. He became one of the key figures in military affairs from the reign of King Rama III to the reign of King Rama IV. In 1850 when he was 42, his brother King Rama IV acceded to the throne and appointed him the viceroy, but his position was elevated to the same level as a king. Afterwards, he was known as King Pinklao, the Second King of Siam. King Pinklao was highly respected by foreigners considering a great number and variety of souvenirs and gifts presented to him by various countries. He had 58 children and passed away in 1865 at the age of 58.

The second part of the exhibition — The Embodiment Of Eastern Philosophy — shows King Pinklao's interest in the conservation of Siamese traditional arts. He promoted royal ceremonies and religious practices at his palace and also restored and renovated many temples. He demonstrated his intellect in the aspects of literature and music. He wrote verse and played several musical instruments.

Moreover, King Pinklao was open to influences from other Eastern philosophies, especially those of Chinese origin. His private residence was built in the Chinese style. His personal collections consisted of many Chinese objects, such as a stone bed decorated with mother of pearl inlay, a Chinese-style throne, a stone plaque with a blessing written in calligraphy, Chinese ceramics, furniture and lanterns.

The third section of the exhibition is entitled The Opening Of Siam To The Western World. This part shows King Pinklao's acumen and admiration of Western contributions. King Pinklao excelled in the English language, naval and artillery affairs, music, steamship building and several other fields of sciences from the West.

There was evidence that every time he was visited by ambassadors, diplomatic corps or missionaries at Wang Na Palace, they said King Pinklao was very keen on art, culture, traditions and customs and Western technology. He wisely adapted new innovations and what he learned to his way of living.

Two examples of his admiration of the Western lifestyle are the way King Pinklao grew a moustache and beard and gave out name cards designed by himself to all the diplomats, missionaries and important guests. Furthermore, he gave the name George Washington to his first son Phra Ong Chao Yodying Prayura Yot due to his being modern and knowledgeable about Western history.

Furthermore, he played a major role in helping Siam survive threats of imperialism, especially via his good ties with missionaries and other foreigners from England, the US, France, Denmark, Portugal and Holland. During the reign of King Rama IV, Siam opened up to new relationships with many Western countries. Both King Rama IV and King Pinklao inked agreements on diplomatic relations with powerful nations such as Britain, France and the US as well as many trading treaties. Through those treaties, both kings successfully used a strategic plan which allowed them to follow and cope with modernisation. Their long-term vision enabled Siam to remain free from the danger of colonisation.

In the field of art and architecture, King Pinklao incorporated Western architectural design in pavilions and furnished them with Western furniture and accessories. One example is the neoclassical style of the pavilion in which he resided — the Itsaret Rajanusorn Pavilion, or the formerly Wongchan (Ring of the Moon) Pavilion. This style was popular in Britain and the US during the 18th-19th centuries and called the Adam Style in Britain and the Federal Style in the US.

In all, King Pinklao, the Second King of Siam, applied both art and sciences to national administration and his way of life. He lived his life with simplicity, good taste and the balance of traditional and modern influences.

- The exhibition is open to the public at the Itsarawinitchai Throne Hall, the National Museum Bangkok, during 9am-4pm on Wednesdays-Sundays.
- Contact 02-224-1333. 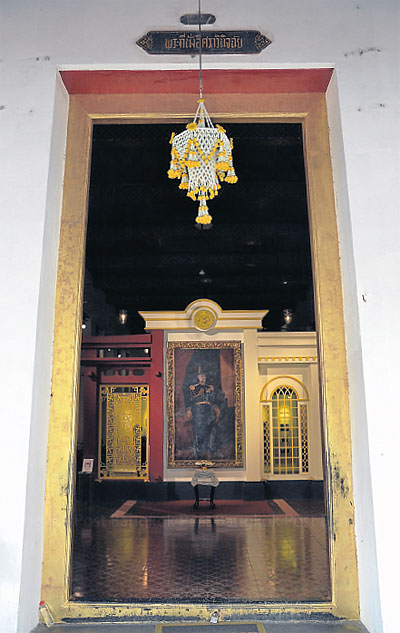 At the entrance of the Itsarawinitchai Throne Hall, visitors can see the oil painting of King Pinklao wearing a navy general’s Western-style uniform. 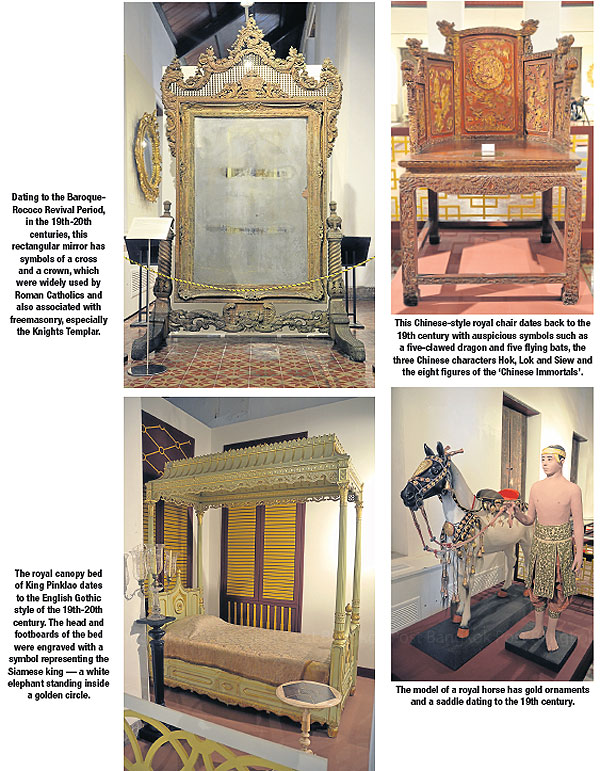