Love hurts. Young love hurts even more and pregnancy, the unwanted kind, hurts (and haunts) the most. Hear me puppy lovers: without self-restraint, at least carry condoms. Without condoms, well, wear a strong amulet or else the demon will follow you like an interminable bloodhound — at least when abortion is still illegal and immoral in this society. 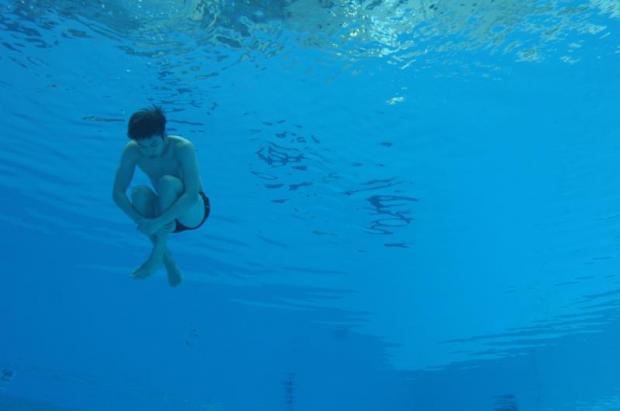 The cautionary message of the new teen horror Fak Wai Nai Kai Ther (The Swimmers) isn't exactly about ghosts but about guilt and the terrifying aftermath of a hormone rush. Mid-teen lovers and underaged cherry-poppers will find the entire movie close to their hearts; whether they'll be spooked into practicing abstinence and resorting to exercise when they feel a sexual urge is something I'll leave for the consideration of the Ministry of Culture.

Anyway, this is a mid-range horror that relies on the playbook of old visual tricks and sound assaults. It strives to be an envelope-pusher, but in the end it's bound by a compromising attitude boxed in bourgeois taste and karmic lessons (to make horror films, sometimes you can't push the envelope but tear it to pieces with orgasmic glee).

In all, Fak Wai Nai Kai Ther is nicely constructed, tolerably spooky and contains at least one bit of worthy provocation about bodily possession. The central conflict — I'm not spoiling it because the PR material explicitly boasts it — deals with men's worst nightmare: male pregnancy.

The cautionary tale aside, muscular teen boys and cutesy-sexy teen girls on the poster will surely draw in the young crowd. This is a story of triangulated love. Tan (Thanapop LeeRatanakajorn) is a star high school swimmer who's dating Ice (Supassara Thanachart, well-known from the hit series Hormones), but Ice ditches Tan for his best friend Perth (Juthawut Patarakampol), also a popular swimmer. Five minutes into the story, Ice commits suicide by plunging head-first from a diving platform into a waterless pool.

She did that because she was pregnant. In a series of flashbacks that's stitched seamlessly into the main narrative, we learn that Perth is likely the one who knocked up the poor girl. That's when strange things (what else) begin to inflict the cocky boy's mind and body, notably when his tummy starts to swell.

Wombless, men run for the nearest exit, or in this case, the nearest ultrasound machine, when they realise the horror of having something inside their body (the film's Thai title is literally translated as "leave it in your body"). In a way Fak Wai Nai Kai Ther is smart enough to show that you don't need an army of ghosts, because pregnancy is the scariest thing that could happen to a man.

But in other ways, the film doesn't push hard enough from that premise. In my twisted mind, I envision a grotesque-fest, a visceral implication of the freak-out nature that's punishing Perth, physically and mentally. This is a film about the body — the biological body, the hallucinatory body and the body politics between the sexes — and yet Fak Wai Nai Kai Ther (which proudly shows many topless male bodies) is too caught up in its own plot mechanism, surprises, red-herrings and the requisite timing of scary set pieces (in bedrooms, in the pool, etc). I imagine a subversive slasher, even a feminist revenge fantasy, instead of a ship-shape karmic lesson. Despite having an anti-hero at the centre, which is a rare thing in Thai cinema, Fak Wai Nai Kai Ther doesn't send me out with a kick in the stomach or acid in my mouth. As it should do.

The film's director is Sophon "Jim" Sakdapisit, a specialist in the horror genre since he was a film student. His previous hit, Laddaland, is a story of a family stuck in a haunted housing estate, their middle-class woes compounded by recalcitrant spirits, and that film achieves an uncanny blend of drama and fright. In Fak Wai Nai Kai Ther, it's obvious that the script tries to cash in on the trope of sexually precocious teens, notably taking leaves from the popular series Hormones (which is produced by an affiliation of the same movie studio that made Fak Wai Nai Kai Ther). It's all tease, foreplay and the lip-kissing isn't about the characters but about eliciting young viewers' ooh-aahs.