The surprising evolution of the playful genre, from the rural rice fields to the Bangkok stages

'Molam can't be tamed," so the old saying goes. The years have certainly proven this true. From now until the end of March next year, the Jim Thompson Art Center presents "Joyful Khaen, Joyful Dance", an exhibition tracing the development of molam from its ritualistic roots in Isan, through its passage as anti-communism propaganda, to its current place in pop culture, where the once rural music is played to the cool or even international crowd of Bangkok. 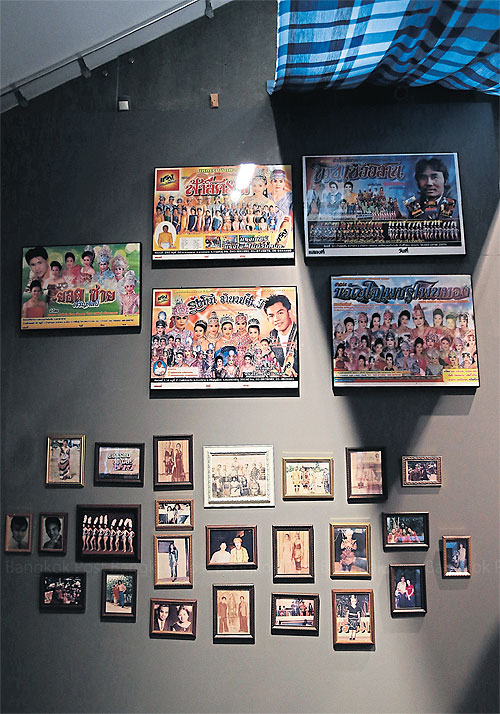 History of molam in pictures.

A genre of northeastern music characterised by mellifluous yet sharp-edged melody and poetic verses about love and hardship, molam has long been part of the Isan identity. Poor man's music from the poorest region — the genre has been anything but stagnant.

"[Molam] has changed the way Thailand has changed," says music writer John Clewley, who is an adviser to the exhibition. The music has adapted with the political atmosphere, he adds, influenced by waves of nationalism and anti-communism, to capitalism as it becomes a commercial entity. The history of molam, therefore, partly reflects the history of Thailand.

The Jim Thompson Farm initiated a long-term project of preserving Isan culture in 2012, beginning with a molam competition. "Joyful Khaen, Joyful Dance" is part of the ongoing curatorial project. This exhibition, divided chronologically and thematically into three parts, aims to introduce the social context of molam to an audience not from Isan.

Dubbed "Molam 101" by Gridthiya Gaweewong, curator and artistic director of the art centre, "Joyful Khaen, Joyful Dance" will travel to the Northeast and make a final stop at the Jim Thompson Farm in Nakhon Ratchasima where it will be transformed into a permanent exhibition.

The exhibition begins with an altar for the worship of Pee Faa (the most superior spirit, akin to an angel, who is believed to be able to determine death) decorated with flower garlands made from jasmine and bougainvillea and bachelor buttons, not significantly different from a Buddhist altar today. The molam Pee Fah performer professes to heal illnesses, acting as a medium — a tradition dating back to the 16th century.

This section titled "The Birth of Molam" introduces visitors to molam's tie to spiritual cosmology, to Buddhism and to its use in courtship. The text panels run from ceiling to the floor — providing extensive background information of the artefacts, which range from notebooks and instruments to photographs and costumes worn during performances. While reading the long texts may be tedious, they are an essential part of understanding the historical exhibition.

"Molam as entertainment and molam in the academic sphere are completely different. Doing researching on molam is extremely difficult," says Arthit Mulsarn, one for the four curators.

Arthit wrote his MA thesis on "The Nation and Arts", using the tradition of molam as the case study. "There are hardly any written records — the only records found are from the religious and government sector. Verbal accounts are difficult to attain and the facts even more difficult to ascertain. I have to interview at least four people so the matching accounts are taken as accurate. You hear many different stories."

As the political landscape in Southeast Asia shifted at the end of World War II, molam transformed with the time. The second part of the exhibition, titled "A horse with a horn and a pole with a flower", features anti-communist and pro-democracy lyrics that are reminiscent of the songs supporting our current leaders today. Because of its location, the Northeast was a stronghold of left-leaning ideology, which became more pronounced with the threat of communism.

"[The US] used molam to spread the notion of the American Dream," explains Arthit. "Later, when Mao's army defeated the Kuomingtang, America began using molam as a propaganda tool in its psychological warfare.

"Oh dear, I would like to tell you about the bad people in the big forest," begins a song painting the communists as wicked, titled Short Folk Song Of The Communist Party Of Thailand.

"I would like to tell you about the main meaning of democracy," begins another song. Though it is rather regrettable that the songs are displayed in words and not in their musical form. The exhibition is geared more towards education than entertainment.

"In fighting communism, the US joined hands with the Thai government and controlled the media, like radio broadcast in the northeast. At the time, no one knew America was behind it, but of course, evidence has surfaced," Arthit adds.

Molam became the voice of the government for the illiterate population. "America only had a few molam players but as with any media trend, if you support the government, you have backing and better promotion. Communist molam went underground. It is extremely difficult to find any records of them today."

The US also encouraged Thailand to affirm its nationalist ideals based on the nation, religion, and monarchy, insinuating that communism would destroy these institutions.

"In the era of Field Marshal Plaek Pibulsonggram, the notion of being Thai was determined by blood. Chinese people were excluded," explains Arthit. By the late 50s, Field Marshal Sarit Thanarat discarded the notion of bloodline as a point of unity, recognising various genealogies, from Thai-Lanna, Thai-Muslim, to Thai-Isan, as Thai.

"Culture and tradition became what glued the nation together. People began to ask, 'What is Thai culture?'."

In the mid 80s, molam and other traditional local arts such as shadow play found their place in the National Artist recognition by the Office of the National Culture Commission.

Around the same time, the economical changes brought about by foreign investments, particularly Japan, brought about influx of migrants from the Isan region into the city, looking for opportunity. Molam entered the city and into pop culture.

Globalisation replaced communism as the enemy of the Thai identity. "There was a thinking that to look for traditional culture, you have to go to the serene countryside where life is slow and there's no competition," says Arthit.

Molam was also competing in the era of cheap cassettes and the developed music industry of Bangkok. The evidence of its continuance displayed behind the glass case in the exhibition. The vinyl and CD racks capture the aesthetic of time.

"On top of not keeping written records, molam fans also throw away old artefacts. Maftsai (contemporary international molam DJ) found an old record in Ubon where they were about to burn it as garbage," Arthit explains how the exhibition could accrue more artefacts if people learn of their value as historical relics.

"Molam survived because it's flexible. It moves with the time," says Clewley. "Nowadays, a molam show features mostly pop and luk thung, with a few molam tracks. The singers aren't trained like in the past. They don't have the pipes of, say, Plern Promdan, but the show has become more professional, with better lighting and dancing [by a troupe of flamboyantly costumed hang krueng]."

The grand spectacle of a molam performance today, unfortunately, can only be captured in the exhibition in photos and a few videos. The Jim Thompson Art Center will make up for it by hosting a range of performances, as well as talks, throughout the six-month exhibition.

"The live shows in Bangkok, Isan, the village, the temple fairs, are all different. Upcountry, the events go from 9pm to 5.30am. People put out mats and the grandkids fall asleep. There's always some fight, but now they usually take place off to the side," says Clewley.

"The puang malai (garland) used to be made from flowers, and would cost about 10 baht. There are now garland made of 100 baht notes, which are given to the dancers, gay or straight."

"Joyful Khaen, Joyful Dance" presents a comprehensive overview of the evolution of molam. These days, fans could watch a molam performance every day in Bangkok at certain bars on Sukhumvit and its journey from the rice fields to the capital is spectacular. Back in Isan, however, molam can only be experienced at special occasions.

"Molam isn't just for Isan people anymore. It's a commercial entity. There are so many different ways it can be composed and performed. If you want to be a molam National Artist, you have to perform a certain way. If you are more commercial, you may be more pedestrian, you approach big records companies and all that," says Arthit.

"DJ Maftsai has appropriated molam and plays it in the framework of world music. Even if the songs were the same, they are different from the molam of Isan people. It's good that molam has taken so many forms. It's like food. Even if it's from Isan, it doesn't have to be by or for Isan people."

"Joyful Khaen, Joyful Dance" is an exhibition at the Jim Thompson Art Center that runs till March 31, 2015.
Open everyday from 9am to 8pm. 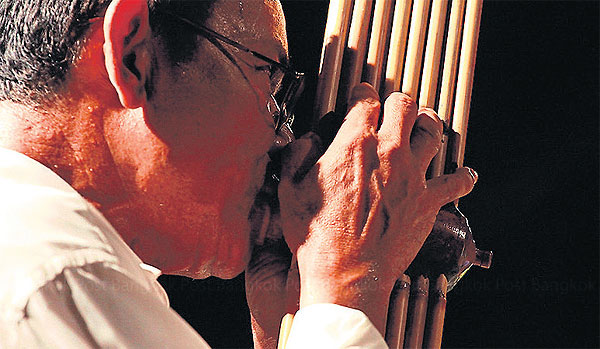 Isan Or la Nor.