Arts of the supernatural

Magical iconography of the Eastern Shan States and Lan Na

Susan Conway's beautiful and fascinating book focuses on graphical devices drawn on paper, cloth or the skin, and used mainly for protection, healing and divination. She passes by spirit mediums, rites and amulets because they have been described by others, and builds on her knowledge of iconography from her earlier work on textiles. The study covers the Eastern Shan States and Lan Na, especially Yaunghwe, Kengtung, Chiang Mai and Mae Hong Son. 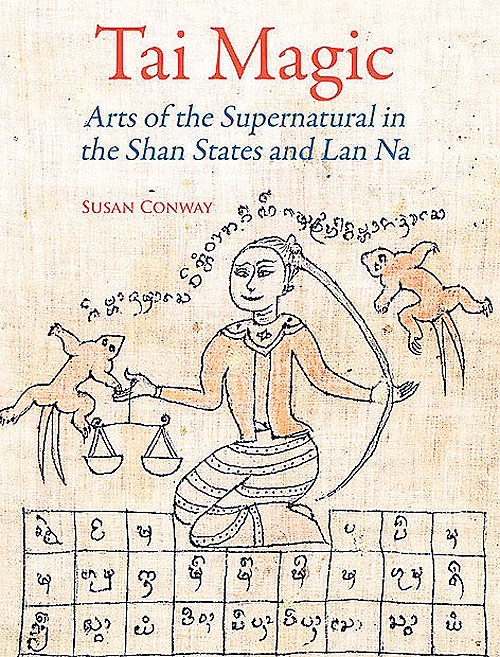 Susan Conway's Book: Tai Magic: Arts of the Supernatural in the Shan States and Lan Na.

The idea that reason would drive away magic has turned out to be one of the great misconceptions of the modern world. In a US university bookshop I visited last year, the section on magic was many times larger than the section on Asia. Throughout South and Southeast Asia, people use graphical devices for magical purposes. These graphical devices contain pictures, words and numbers which have supernatural power from several sources, including Buddhism, Hinduism and spirit belief. The device is a means for an adept to store his special ability in something which can then be used by others.

The most unusual and fascinating part of Conway's study concerns designs drawn on mulberry paper to combat various kinds of misfortune. The designs are inserted in votive candles, or dipped in oil and then burnt. The residue is sometimes diluted and either applied as a paste or drunk. In the designs, the Buddha is rare and Hindu gods even rarer. The pictures are mostly animals, scenes from folk belief, and occasionally legendary monks, especially Phra Siwali. The designs are crowded with numerals in magic combinations and mantra texts in a confusion of different languages and scripts, often little known and understood today. These devices seem to be direct appeals to the spirits who govern well-being, good fortune and the future.

Conway refers to the experts who make these devices with the Shan term, sala. They are always male, even though women have a dominant place in other forms of spirit practice. They often consult old manuals for the designs and tailor-make them for each client, but some now mass-produce the devices for common problems and some sala craft their own designs.

The designs drawn on cloth have two main uses. Some, often made during house construction, are kept at home to provide protection. Others are carried on the body; in the past they were drawn on clothing, but now are more likely to be carried in a pocket. The designs have the same elements of pictures, numerals and text, but with more of a role for Buddhism than in the paper devices. Some have the circular shape of a mandala, the symmetrical style of a yantra, or the checkered designs found on the Buddha's footprint and other Buddhist devices. They sometimes include groups of monks, or other references to Buddhist legend. Some have an element of astrology, based on the simplified numerical systems rather than planetary movements. 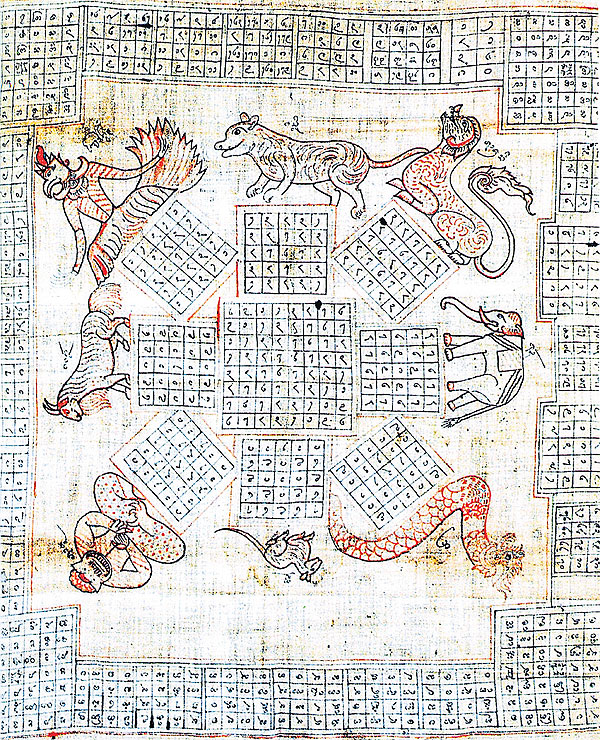 A page from Tai Magic: Arts Of The Supernatural In The Shan States And Lan Na.

In the not too distant past, tattoos were virtually obligatory for young males in this area, preferably covering much of the area from waist to knee, as well as the chest and upper arms. The favoured designs were animals, particularly tigers and civet cats, with obvious symbolism of virility and martial skill. More recent designs have a similar mix of elements and symbols as the cloth and paper devices, and are designed to provide more general protection from misfortune. Tattoos are now morphing from semi-sacred devices into fashion choices, and old practitioners lament the decline.

In one superb chapter, Susan Conway sits in the "surgery" of a handful of different sala and gives us a diary of their daily roster of clients. Their services range from healing stubborn medical complaints to predicting the future of new businesses to conferring protection on new vehicles. Some sala are going out of business as hospital treatment and other services become more accessible, but most seem to be doing very well.

Conway's approach is mainly descriptive with great detail on iconography, materials used, rites performed, symbolism and sources. She does not try to theorise too much.

Her devices are interestingly different from similar devices in Siam; they have less Pali language, less Khmer scripts, and less of the symmetry which is perhaps also a Khmer legacy. The Tai-Shan designs she presents are often wonderfully chaotic.

The book is beautifully illustrated with articles in use by sala today, along with some found in US museums or private collections in Thailand and the West. The text does a great job of explaining iconography, symbolism and ritual practice in very clear and clean prose.