A sculpture which was the last, unfinished work of the late National Artist Misiem Yipintsoi has gone missing from the family-owned garden where it was on display to the public. 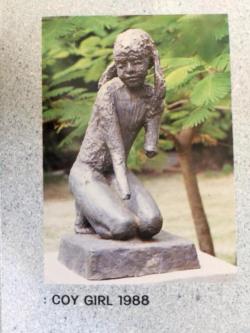 The "Coy Girl" sculpture, the last work of art by the late National Artist Misiem Yipintsoi, has gone missing from the family's private collection in Nakhon Pathom.

The piece, called Coy Girl, had been on show at Misiem's Sculpture Garden in Nakhon Pathom.

Klaomard Yipintsoi, Misiem's grand-daughter and caretaker of her estate, said the family learned about the missing sculpture just after Christmas. They have reported the theft to police.

The sculpture had been available to view at the private collection on Phutthamonthon Sai 7 Road since the venue opened more than 20 years ago, Ms Klaomard said. The work is considered an important work of art, since all of Misiem's creations are regarded as museum pieces.

The sculpture garden was established by Misiem in 1980. It was her intention to let the public appreciate art in the middle of nature. The garden was open for public viewing upon request.

"We are not confident the remaining artworks will be safe under these conditions," she said.

The sculpture, of a girl in a kneeling position with sculpturing work on her arms unfinished, bears Misiem's trademark elegant style and was the artist's final work.

Ms Klaomard said she found no tracks from the artwork being dragged out of the garden. The sculpture is about the size of a human, so it would be difficult to move.

"It is not the usual sort of crime in these parts. It seems whoever took the sculpture had an eye for this piece," Ms Klaomard said.

She noted it would be difficult to sell the piece on the market, since it is known that none of Misiem's works are available commercially.

The Coy Girl sculpture is one of only four works in the garden not anchored to a pedestal.

Ms Klaomard admitted the family has no insurance for the artwork, because they never thought any of the sculptures would be stolen.

"Frankly it had never entered my mind that somebody would do this. Whoever did this has no regard for the public interest," Ms Klaomard said.

No stopping the spectacular