A brief history of life

Stephen Hawking has lived a great life. It's almost inevitable that when such a life is canned in biopic form — even one that's delicately conceived and sensitively acted like The Theory Of Everything — it feels like reductionism. Art, ideally, should expand, not diminish. But the strength of cinema is also its shortcoming: truncation, simplification, and the ability to create a convincing 120-minute reality out of years and years of adventure. Hawking gave us A Brief History Of Time; this film gives us a sort of brief history of life, as much as that's possible. 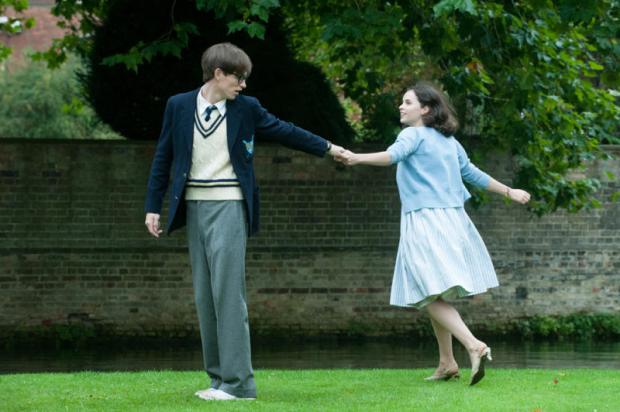 Eddie Redmayne and Felicity Jones in The Theory Of Everything.

Eddie Redmayne, at 32, will breeze into the Oscars as a front-runner (him and Michael Keaton from Birdman, opening in two weeks).

And if you cry watching The Theory Of Everything, as I think you will, it's not because of the actor's physical paroxysm, or not just that, but because the film shows us that the universe can simply be so unkind to some people, and that while time heals all wounds it just can't heal everything. Redmayne's performance as a wheelchair-ridden physicist — Hawking suffers a form of motor neuron disease — is admirable in both technical and emotional registers. This is an unlucky man who's chosen to stop believing in luck, and thus in God, at least in the spiritual sense. His limbs are useless, but his brain still blitzes, and Redmayne (last seen as Marius in Les Miserables) gives us a Hawking that's more defiant than sad.

But once 21-year-old Hawking falls face-first after his first attack of the disease while a PhD student in Cambridge in 1963, the film gives almost (just almost) equal weight to his wife Jane (a committed performance by Felicity Jones).

The film has been adapted from her memoir, and we come to appreciate her loyalty and sacrifice, her devotion and patience, first when she has to stop having her own life to care for her increasingly disabled husband. When she develops a romantic feeling for Brian (Harry Lloyd), a widowed choirmaster of her church, the universe is unkind to her, too. Jane's dilemma in this section of the film is probably its most moving.

Of course, an uplifting film about a man who defies a near-insurmountable tragedy is a lesson in hope and perseverance, but The Theory Of Everything also shows how people closest to Hawking have to go through such emotional ordeal in order for him to emerge the indefatigable winner. It's hard to be a genius in a wheelchair, and it's also hard to be a wife of that genius.

The director, James Marsh, made his name from creative documentary films Project Nim and Man On Wire, as well as an IRA thriller Shadow Dancer. Here he's made a sensitive, middle-brow and conventional film, with key moments in Hawking's life structured neatly, and with every emotional button being pushed just at the right pressure — except maybe the ending, in which the film's resistance to all-out glorification crumbles and we have an elevating life lesson summed up in Hawking's electro-assisted speech.

The Theory Of Everything begins small, intimate, observant, and it ends in a grand arc of human ambition (likewise, the cinematography by Benoit Delhomme is nostalgic and autumnal in the most parts, and turns steely and triumphant at the climax).

Hawking has written about the universe, and he knows that the universe is in a man. He has outlived the worst prognosis, and he'll also outlive this film, which does a fine service to his great life. Though it doesn't seem big enough to contain every starburst and black hole that makes up the man.