ML Bhandevanop Devakul on the art of filmmaking and Buddhism

Passion for your art depends a lot on the environment in which you work. Yet — despite gloomy prospects in the local film industry — that has not stopped leading Thai film director ML Bhandevanop Devakul from creating more artistic films with a moral message.

Speaking recently at Sodsai Pantoomkomol Centre for Dramatic Arts, Chulalongkorn University, Mom Noi, as he is better known, admitted his visit to his alma mater at the Faculty of Arts has been long overdue. The self-confessed bad boy of the drama department, who once turned in a blank page for his Pali exam and eventually dropped out of college to pursue filmmaking, was very critical of the local film industry of today as he shared his career growth and experiences with a large audience of drama students and potential film directors.

Thai society has changed drastically in the past 10 years, with a greater emphasis on the “quick fix” abetted by social media and consumerism. This has had an adverse affect on the arts, filmmaking included. Having been away from the film industry to work in television for over a decade, he returned five years ago to find the new film crew culture more intent on speed than detail, profit than passion. When it was formerly a family and mutually supportive atmosphere, the industry was divided into corporate cliques which were very competitive and market-driven.

He compared the modern film industry to the descent of Greek theatre into the gladiator spectacles of the Roman Empire, which in turn is a reflection of modern society, as well.

And yet he feels indebted to Sahamongkol Film International chief Somsak “Sia Jiang” Techaratanaprasert for giving him his first break, and continuing to invite him to produce his trademark artistic films that are not always box office successes. His films Chua Fah Din Salai (Eternity, 2010), U-mong Phamuang (At The Gate Of The Ghost, 2011, based on the classic Kurosawa film Rashomon), the two Jan Dara films, and last year’s Plae Kao (The Scar) — each of them made around 20 to 50 million baht at the box office, compared to over 300 million baht of last year’s smash hit I Fine, Thank You, Love You. 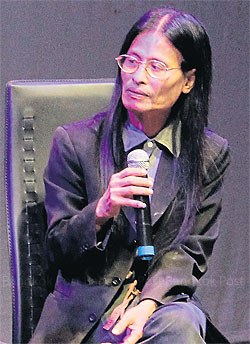 Mom Noi’s passion for dramatic arts manifested itself as early as his primary school days when he would draw comic strips complete with dialogue and colour to show his friends. Little did he know that it was in fact a storyboard, telling a story through pictures, that would be a precursor to a career in filmmaking.

He selected Chulalongkorn’s Dramatic Arts programme which gave him an outlet for all his energy. He produced a number of plays and even a ballet performance during his Chula days, while ignoring other core subjects, a choice which he regrets to this day.

“Every subject gives you a greater perspective of the human psyche and an understanding of the influence of culture and society on human beings. If I had studied Pali then, I would have greater access to the Buddhist teachings which for me are so important to dramatic arts. But it’s never too late.”

Of late, Buddhism has found its way into his work substantially. The previously chain-smoking, hard-drinking director who had very little to do with temples was convinced by his younger sister to attend a meditation session conducted by a revered monk. Despite his cynicism, he had a strange epiphany, which provoked him to read voraciously into the teachings of the Buddha. He also became a teetotaller as a result.

Buddhism and drama are practically one and the same, he concluded. It requires an understanding of the self, the mind, body and spirit. To be a good actor, one has to be able to empty the mind of the self, in order to assume another character convincingly, which is what Stanislavski’s “emotional memory” is essentially about.

Lately Mom Noi has been spending more and more time teaching, at various education institutes and also conducting acting workshops at home. Sinjai Plengpanich, Mario Maurer (who performed in U-mong Phamuang and also the subsequent film Jan Dara) and Sukrit “Bie The Star” Wisetkaew have all benefited and grown as actors under the tutelage of Mom Noi.

Meanwhile, he is also preparing to embark on his newest project, a remake of Mae Bia based on the novel by SEA Write laureate Vanich Charungkitanan. As before, it was proposed to him by Sia Jiang who knows that Mom Noi is after his own heart in his desire to create artistic movies. Despite his reluctance to commit himself to another film, Mom Noi found it hard to say no.

He recounted an anecdote about Sia Jiang’s commitment to artistic movies. “After we had watched the film At The Gate Of The Ghost just before its release, Sia Jiang turned to me and said, ‘If this film doesn’t make money, please don’t be disheartened. It’s been an honour for me to produce it’. How are you supposed to react when the producer says something like that to you?”

What also boosted his morale was when the film was screened at the 4th Kyoto Historical International Film Festival in Kyoto, Japan, and received a very warm welcome from the Japanese audience who he expected would be the most difficult audience to win over because of their protective stance towards the classic Japanese film, Rashomon, by Akira Kurosawa, from which U-mong Phamuang was adapted.

He finds the project challenging because previous versions have concentrated on romance and erotica, downplaying the moral aspect and Buddhist teachings that are the core issues of the story.

Though he says he would be happy to do nothing, this much-lauded director — he received the Phra Surasawadee Award for Best Film, Best Script and Best Director on three different occasions — seems caught in a constant vortex and you sense he secretly relishes the chance to be working on another film, and be allowed to put artistic commitment over box office success.