In honour of relations

To commemorate the fifth cycle (60th) birthday of HRH Princess Maha Chakri Sirindhorn, the British Embassy Bangkok, in conjunction with the Ministry of Foreign Affairs, is currently hosting an exhibition titled "Forward Into The 5th Century Of Thailand-UK Relations" at Central Embassy. 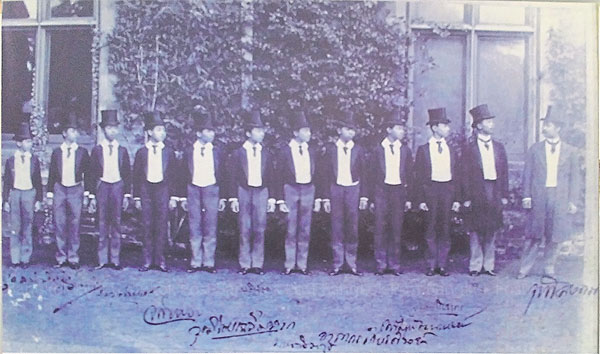 King Chulalongkorn, far right, and eleven of his sons who were being educated in the UK at the time. 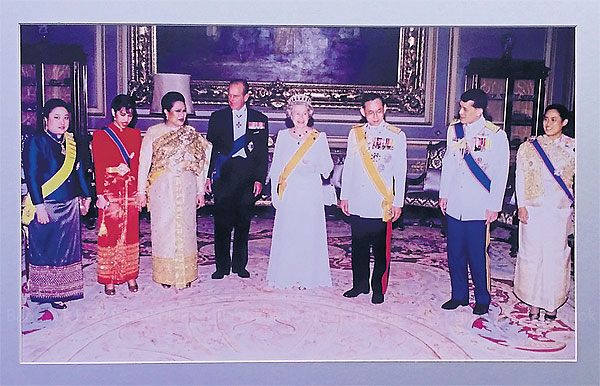 Queen Elizabeth II and Prince Philip, centre, before a State Banquet hosted by HM King Bhumibol Adulyadej at the Grand Palace in Bangkok in 1996.

The exhibition highlights five themes of Thailand-UK relations: a celebration of the links between the two constitutional monarchies; important episodes in the shared history; the trade and investment relationship between Thailand and UK companies and entrepreneurs; collaboration in education and science, as well as enjoyment of each other's culture and country.

The project was born from a discussion with the Ministry of Foreign Affairs regarding Thailand-UK relations, particularly marking 160 years of the Bowring Treaty, and also 400 years since King Songtham of the Ayutthaya Kingdom responded to a letter from King James I carried by merchants of the East India Company on the ship, the Globe.

The exhibition is designed in the form of a maze, with the first panel showing documents and images related to the first contact between the two countries. 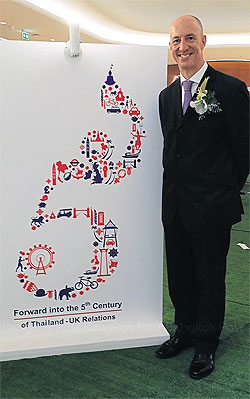 British Ambassador Mark Kent with the logo of the exhibition blending the Thai and Arabic numerals for “5” using the colours of the Thai flag and the UK’s Union Flag.

"The Globe came to Siam in 1612. In 1615, the King of Siam wrote back, so you can make an argument that that was the first point when Thailand-UK relations started," noted British Ambassador Mark Kent.

The exhibition continues with details on the Siamese mission to England and France in 1684, which was attacked by pirates in the English Channel. Goods bound for France were confiscated by British customs, but were finally released to continue their journey to France.

The historical part of the exhibition then depicts the two main treaties between the two countries: the Burney Treaty in 1826, which was a formal treaty on issues relating to borders, and the Bowring Treaty 160 years ago, which set up the framework and opened up trade routes with Siam.

Siam's participation in World War I is also shown, as a nostalgic image of King Chulalongkorn and eleven of his sons who were all studying in England at the time.

Education is clearly depicted, both in the main exhibition and the British Council booth, where images of the royal sons of King Chulalongkorn are displayed, with particular emphasis on King Prajadhipok, who also spent much of his later life in England.

The education section also highlights the Newton Fund for science, technology, engineering and mathematics, as well as the Chevening government fund for scholars for young leaders and opinion formers.

There is also information on contemporary royal links, with several historic photographs featuring the monarchs of both countries. One shows a visit of Her Majesty Queen Elizabeth II to Chulalongkorn University.

"Her Royal Highness Princess Maha Chakri Sirindhorn said she remembers that visit very well because she accompanied Queen Elizabeth the whole time," recounted the ambassador of the official opening of the exhibition by the Princess. Also prominent in this section are letters from Queen Elizabeth II to His Majesty King Bhumibol Adulyadej, inviting him to England on a state visit, and the reply from the King.

Trade is shown to have long been a central focus of the Thailand-UK link, with the exhibition containing a beautifully-penned letter from King Rama IV placing an order for medicine to combat cholera.

"I shall pay you faithfully this cost through your agent of Singapore when your bill comes to sight and will feel much obligation from you for executing this order as soon as possible," the letter ends.

The exhibition at Central Embassy continues until March 16. 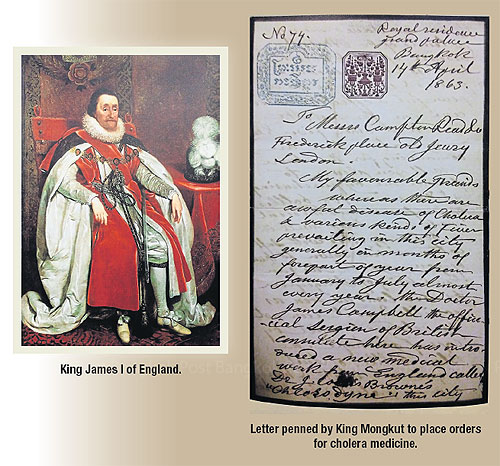