A replica of a stolen replica takes centrestage in Thai artist Arin Rungjang's new installation piece, which is on show in Paris

published : 18 Mar 2015 at 06:00
newspaper section: Life
writer: Kong Rithdee
A studio where an imitation of the crown replica was made. — All photos courtesy of Arin Rungjang.

When Arin Rungjang learned of the art heist near Paris earlier this month, the Thai artist had good reason to feel concerned. At dawn on March 1, thieves broke into a high-security wing of the Chateau de Fontainebleau and made off with 15 priceless works of Asian art, including Phra Maha Mongkut Longya, a replica of a royal crown studded with rubies, pearls, emerald and diamonds. It was one of several royal tributes presented to Emperor Napoleon III by King Rama IV in 1861.

Today at the Maison d'Art Bernard Anthonioz, a museum in Nogent-sur-Mur, Arin, an artist who often creates discourse on the history of international relations, will reveal his new work, Mongkut. The installation piece is an imitation of the recently stolen crown, and features two monitor screens, one showing the process of creating the replica and the other showing an interview with a French curator discussing the history of the royal gifts and how they influenced the way the French viewed Siam. 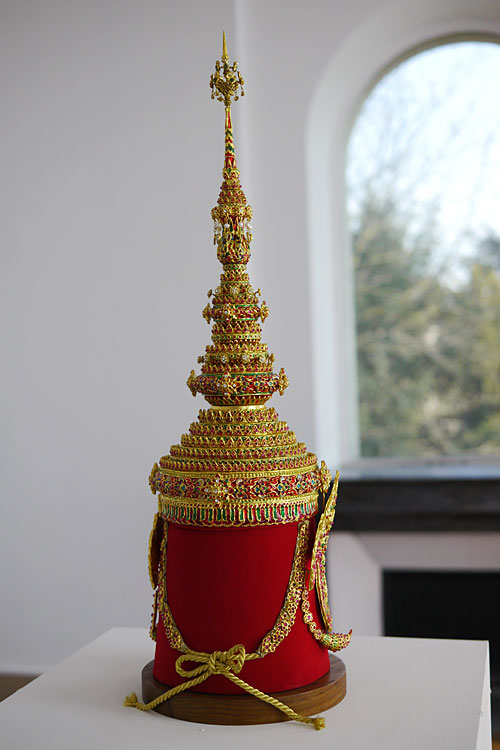 A replica of Phra Maha Mongkut Longya at the exhibition.

The replica of the replica of the 154-year-old crown is the centrepiece of Mongkut, which is curated by Erin Gleeson for the Satellite 8 Programme co-commissioned by Jeu de Paume Museum and CAPC Bordeaux. The idea of Mongkut came to Arin years ago, he said. He got a chance to visit the Chateau de Fontainebleau in December to photograph, film and infrared-scan the piece — his team were said to be the last visitors allowed to inspect the artefact up close. Its high-profile theft has served to add a postmodern twist to the project.

"I was concerned when news of the heist broke," said Arin from Paris, where he's been preparing for the exhibition. "The commisioners have issued an announcement deploring the theft as a gesture ofour sincerity."

The theft has added an unexpected layer to the meaning of the work. Arin's replica of a replica (minus the rubies and diamonds) has acquired a philosophical meta-status because of its representative and interpretative meanings.

The "real" Phra Maha Mongkut Longya has been kept out of sight for centuries. An additional replica was presented by King Rama IV to Queen Victoria at Windsor Castle in 1857, four years before the Siamese delegation arrived at the court of Napoleon III.

"Usually, an artist has to deconstruct his work," Arin said, laughing. "Somehow this theft puts a contemporary touch on my piece. It deconstructs the work for us. There's room for imagination in many levels now." One of Arin's recent works is Golden Teardrop, which represented Thailand in the Venice Biennale in 2013. It features a network of suspended "teardrops" — hundreds of golden dollops arranged in three-dimensional, symmetrical order — inspired by the shape of the dessert thong yod. An accompanying video tells the story a Greek envoy in 16th century Ayutthaya and seafaring Portuguese influence that's believed to be the origin of the famous yellow Thai sweet.

"I'm interested in the modern period — the period in Thai history when there were written records about Siam by foreign travellers," said Arin. "As a visual artist, I'm also interested in the symbolic order and the force that shapes history and culture, from the monarchy in those days to capitalism today."

Even before the theft of the replica crown, Arin's Mongkut held historical relevance. The artist who worked with Arin to craft the replica is Woralak Sooksawasdi Na Ayutthaya, a great-great-great granddaughter of King Rama IV (her great-grandfather was Prince Adisorn Udomdej, the 23rd son of King Rama IV). Woralak comes from a long line of well-known craftsmen known for their exquisite skills in making khon masks, and Arin's collaboration with her gives Mongkut special resonance.

Arin approached Woralak in January, after his visit to Chateau de Fontainebleau, with photographic details of Phra Maha Mongkut Longya. For her, the information wasn't complete, but she took delight in making the replica. 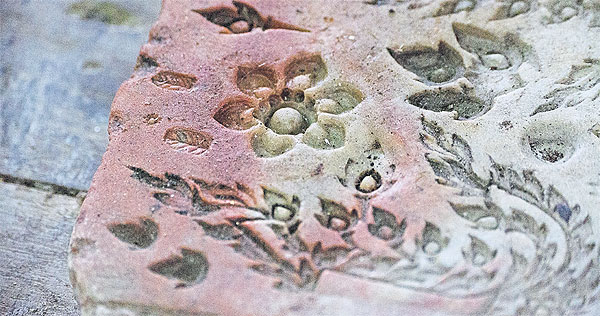 "I worked out the proportions and studied the details of the pattern and the decoration from Arin's photos," said Woralak, who has a studio in Ayutthaya. "There was very little information of the [original] crown, and no one ever saw it. But I did research online — believe it or not, there's useful stuff on the internet if you look carefully, such as a YouTube video of a seminar that discussed the royal crown.

"I did it the way I did a khon mask. The mould is made from wood, but because of time limitations I couldn't use the original technique of long rak ron (hot lacquer) and instead used long rak yen, using resin as a base. We used 100% pure gold leaves [on the surface]. I tried to find out about the gemstones used in the original replica; the information said there were emeralds, rubies, diamonds and pearls, but I suspect that there were also aquamarine and beryl. From the photographs, the cutting of the diamonds and the gemstones are also of the period style that cannot be reproduced. Anyway, we couldn't use genuine precious stones in our piece."

The most difficult part to create was the decorative patterns, a set of motifs and curlicues of the antique fashion. Woralak didn't have time to study and reproduce them all, so she used some of the soapstone moulds made by her grandfather, MR Charoonsawasdi, who was a respected artisan.

"Two months is a very short period," she said. "I'd prefer that Arin go back to remeasure so I could make alterations. The best way is for me to go and look at the thing. But when I finished the crown, the very next morning I heard of the theft in Paris."

At the moment, Arin has no plans to exhibit Mongkut in Thailand.

"I don't know when I'll show it here," he said. "But the work exists now, and it will mean something today and in the future."