It's a real shame that works by Dutch artist Daan Botlek in "Inhabited Hypercube" were only displayed for a week at Cho Why gallery in Chinatown. Yet, that was a happy sign that curator Myrtille Tibayrenc's Toot Yung Gallery, who organised the exhibition as their first nomad project after her space closed down in Ekamai last year, is very much alive and doing rather well. 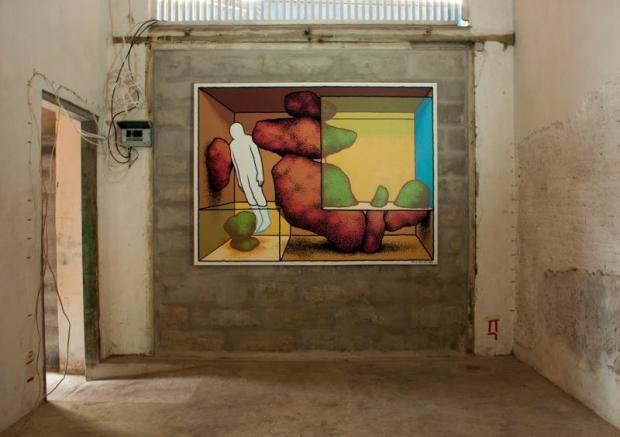 Despite its brief stay, the set of works made a lasting impression and it's definitely one of the most refreshing exhibitions we've seen on the Bangkok art scene in quite a while, unlike a few other big names who have been granted two- or three-month tenancy in the space but not having anything new to say. Spreading all over the space's ground and first floors and to the neighbouring multipurpose space Food Court and a Spanish tapas bar El Chiringuito, the Botlek's paintings feature identical faceless characters, presumably representing all of us, trapped in absurd and inexplicable situations in each canvas. In I Chase The Devil, the character, with a mini version of itself hanging on its back, is stepping into its own shadow on the wall, gradually making part of its body disappear. In I Wanna Be Your Dog, the character's bone structure is transparent with its mini self squatted within its rib cage.

In most of these paintings, characters are locked up in a box filled with rocks and a level of water that seems to be increasing. In the neighbouring Food Court and El Chiringuito, the paintings became site-specific installations with Botlek's fun play in the spaces which are still in a reconstruction phase, for example in Touch Down, a stream of faceless body cut-outs were hung from the upper floor to the ground.

With light colour tones like yellow, blue and brown, and simply drawn lines, the hopeless human conditions in these paintings really caught the viewer unawares.

A sense of absurdity continues at H Gallery's "State Of The Ridiculous" (until April 26) by Tuksina Pipitkul and Wantanee Siripattananuntakul. On the ground floor, a series of photographs by Tuksina explore the ridiculous reversal of logic. A series of photographs with bright blue sky were Photoshopped with elephant dolls, which are floating up in the air, not by the balloons, but rocks. Walking further inside, a train of headless pig dolls are floating up near the ceiling. Down on one corner, their severed heads are gathered, and if this is the story of brutality towards animals, it could not have been told in any cuter way.

At H Project Space one floor up, visitors aren't allowed to go inside to see Wantanee's installation of a world map that spreads all over the entire floor, but view it through peepholes, an experience which felt like looking at Earth from the window of a plane.

While each continent is marked by notable attractions like the Statue of Liberty, Eiffel Tower, the Tower of Pisa, St Basil's Cathedral, etc, Wantanee portrays the current state of the world thrown into disarray by consumerism and social inequality. A great number of paper model houses lay collapsed on the ground. Such destruction is likely to have been done by mini robots which are banknote-folded into cockroaches which have spread everywhere on the map.

After imaginary characters by Botlek and the state of absurdity at H Gallery, 31-year-old Trirat Sriburin's collection of woodcut prints bring us back to realistic depiction of the world he sees in "Print Make Print" (until this Sunday) at the National Gallery on Chao Fa road. On a first glimpse, viewers are blown away both by the number of prints, collected over 10 years of his career, and how layer after layer of detail was patiently applied through each round of woodcut print.

The first part of the exhibition features Trirat's early works, in which he depicts various deserted scenes of his hometown in Maha Sarakham province as a number of people had left to work in Bangkok.

These scenes of deserted streets, of shops closed down and of vendors carts being left to rust are put together with the next part of the exhibition which feature scenes of Bangkok where Trirat later came to study and live. But instead of the bustling of cars and people, like in his early series, Trirat intentionally rid the scenes of all the chaos expected of the capital.

Most of his later works feature a direct view of apartments with row after row of identical tiny balconies. But unlike those lifeless scenes of Bangkok streets, different little details Trirat carefully put in each tiny room — shirts, trousers and underwear hanging outside — have given the set more sense of understanding towards the Bangkok he may have previously thought cold and lifeless.

Contact kaonap@bangkokpost.co.th with comments or news on art events. 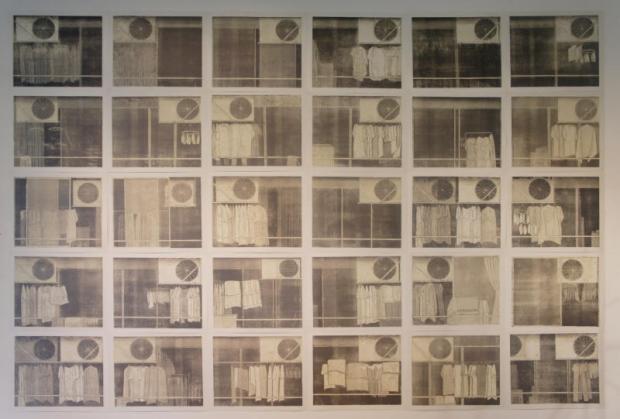