A journey through used jeans

'What's great about this country is that America started the tradition where the richest consumers buy essentially the same things as the poorest. You can be watching TV and see Coca-Cola, and you know that the president drinks Coke, Liz Taylor drinks Coke, and just think, you can drink Coke, too. A Coke is a Coke and no amount of money can get you a better Coke than the one the bum on the corner is drinking. All the Cokes are the same and all the Cokes are good. Liz Taylor knows it, the president knows it, the bum knows it, and you know it."

There are few things in life that work on this principle in a capitalist economy. Take Andy Warhol's philosophy and replace drinking Coke with wearing jeans and there it is — the democracy of donning denim.

In university, Pongsakul Chalao had been looking for a medium and a method that would set him apart as an artist, and he found one in the most ubiquitous of all materials, and one that was once so essentially American but now so global and so close to home.

Pongsakul got all "Tangled Up In Blue" in the exhibition curated by Julie Camdessus and Martin Gerlier at S Gallery, and named after Bob Dylan's 1975 single — a song about a journey across time and distance.

The jeans used in his works have travelled the world. Made in the East, used in the West, returned to their origins as donated goods, then sold as used clothing at Wat Suan Kaew in Nonthaburi for 20 or 30 baht a pair.

At the exhibition opening, Pongsakul wore denim on denim on denim. His trousers have been made from the same roll of dark fabric that he has used in place of the regular stretch canvas in his works of Bangkok cityscapes. He brought the piles of cut-up jeans in every shade of blue and grey and brown that he had accumulated over the years. In the pile hid a child's pair of jeans donated by a girl whose father had bought Pongsakul's work. Pongsakul even brought his sewing machine, a graduation gift from his aunt who works in his family's tailoring business. When he was growing up, he would sew buttons onto shirts for 10 baht a go.

From a distance, his works appear like oil paintings on a canvas. The houses made of rusty tin sheets are reflected on the surface of a polluted canal with weeds growing on the sides. The wires obscure the views.

Each realistic detail is recreated from the jeans Pongsakul takes apart.

"I find secrets in the folds," he said. In the dye beneath the pockets, in the stitching, in the fray at the hem at the ankles. The faded ripples of worn jeans create the effect of a makeshift curtain for a destitute home. Acid wash denim becomes cloudy skies. Labels become advertisement signs in a scene from Nana.

"The brand tags appear, but you never know if they are knock-offs," said Pongsakul. Over the past three years since he began using denim, he has consistently refined his concept.

"I thought of the origins and of the stories behind these pairs of jeans — mass-produced to answer to the needs and desires of consumers," he said.

When he lived and worked at V64 Artstudio (an art collective in Vibhavadi, which has since disbanded), he always wandered around the neighbourhood, talking to people in the community, wanting to understand how they lived. He said the homes always looked complex from the outside because of how the random materials were put together. The streets formed a maze.

"But they seemed to live simply. I was struck by the contrast and by the fact that the flimsy walls were put up just to conceal the activities within the homes," he said. "Denim is strong. Denim clothing was created and used for its durability, for its resistance to wear and tear, but that is no longer its purpose. It's fashion. It's consumerism. It's everywhere."

Pongsakul pastes the denim pieces together the way these people have pieced their homes together, building layer upon layer, as with an oil painting. Each work is exceptionally intricate — Pongsakul achieves the effect of light reflecting off a drying rack from the wear of the wash of the jeans. He works on the reflections in the canals, not resting until he finds the right shades. The large works are intriguing from a distance, but upon closer inspection, become even more captivating in their layers and textures.

"Tangled Up In Blue" is on display at S Gallery, Sofitel Bangkok Sukhumvit until June 6. 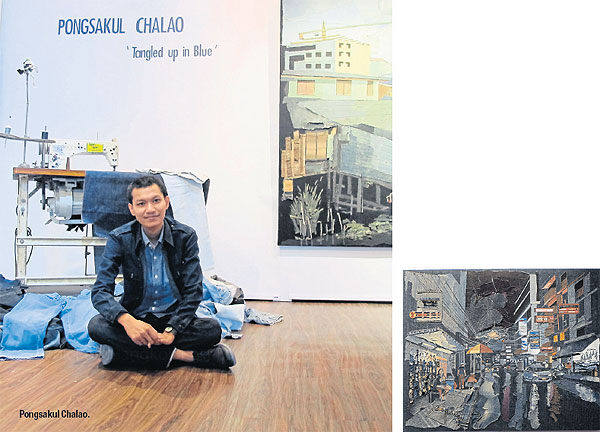