It’s all about cute for street artist Sand One, whose creations are making a splash in Bangkok

published : 28 Jun 2015 at 07:01
newspaper section: B Magazine
Spray it, don't say it: Los Angeles artist Sand One says she has been inspired by Thailand. (Photo by Kanyakrit Vongkiatkajorn)

Sand One’s dolls are brash and busty. They hang out on the streets of Los Angeles, Miami, Mexico City and now Bangkok, lips puckered, eyelashes large, curled and spider-like. There’s Mascara Baby, blonde and skinny, the girl who wants to stay at home and paint her face all day. There’s Stacks, the blue-haired businesswoman who loves sushi and vodka. And there’s Captain Bermuda, who has a boat but can’t swim. Some dolls elude seduction; others embrace it. They’re sexy, but above all, says the LA street artist who created them, they’re cute.

“Cuteness, always and forever,” the 23-year-old said over durian and sticky rice in a Tesco Lotus food court. “Cute, cute, cute that’s all I want. All I’m doing is just painting s**t that’s cute, but people connect with it.”

Sand, who has curated and held exhibitions all throughout the US, had just finished a mural off the busy intersection of Rama I and Banthat Thong roads. The artist approached the owners of a gas tank store and asked them if she could paint their wall. Though she cannot speak Thai and the owners understood just a bit of English, they managed to gesture and fumble their way to an agreement.

“We thought she was cute,” said Thuanglat Kongtanachat, 71, who owns the store. “Why not have a pretty picture rather than letting someone deface it?”

Over the course of two days, Sand painted what she calls a Thailand-inspired mural: a doll hanging out with her phad thai-eating Chihuahua next to a temple. “My doll’s being romanced by a man who lives on a boat and sells phad thai at the floating market,” Sand said. “But I don’t think my doll’s falling for it — she’s a bit too materialistic. I don’t think she could live a life of phad thai and boats.”

She was tempted to name her doll Wat Pho, but decided against it.

Sand One’s in Thailand to pursue one of her less artistic, slightly more epicurean dreams: to eat real Thai food, made on the street. But she’s also here to paint and leave her mark on the city, in hopes of one day returning and inspiring more women to pursue their artistic dreams.

“I want to come back and paint bigger buildings, I am very inspired by the conservative yet daring air of Thailand,” she said. “From the bars filled with lovely American men searching for the long-awaited Thai dream to the endless food carts full of delicious rice and noodle dishes.

“I can live here forever, but I need to first figure out how we can make Thailand be an art town, filled with curious art lovers and collectors as I have in America. Thailand is patiently waiting to have an urban art explosion. And I can’t wait to be here to watch.” 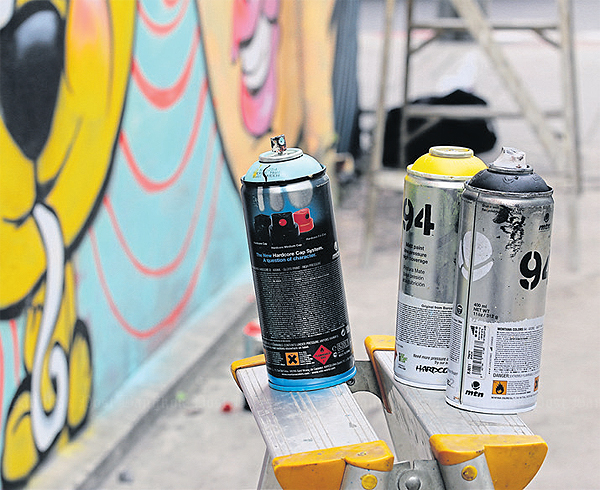 Sand grew up in East LA, a predominantly Hispanic neighbourhood where more than a quarter of the population live below the poverty line. She describes it as “Mexican, with a lot of gangs, drugs, a lot of love for families and a lot of failures”.

Growing up, Sand wanted to be a flight attendant, but realised that, at a little over 150cm, she wouldn’t meet the height and weight requirements. She shrugged off the dream and soon found herself painting. As a teen, she often snuck out of her house to practise sketching on the train tracks. From the start, her dolls featured the huge eyelashes that have become a trademark of her work.

“I’m known all over LA as the girl who paints the huge eyelashes,” said Sand.

Many of Sand’s dolls are inspired by women she meets, women who have caught her attention with a unique hairstyle or dress, or women who have shown her kindness and warmth. Her paintings are often large, spanning whole walls and featuring a doll and a companion, which switch between teddy bears and dogs. Her signature eyelashes were inspired by her mother, who she would watch applying layer after layer of mascara every day.

Sand has never met her father, but she credits him for her desire to be different. 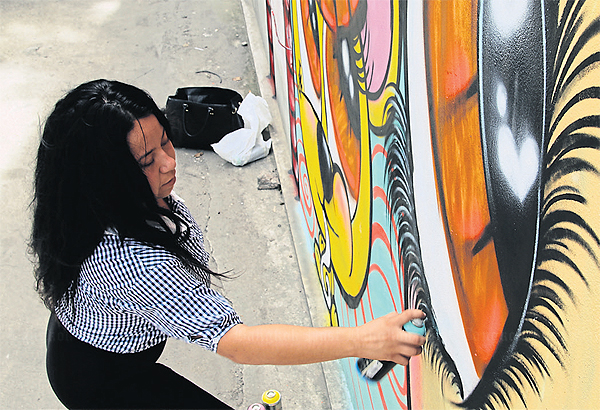 Sand sold her first painting at 17. “I remember that I just had the painting out in my garage, and a guy came by and asked me how much it was,” she said. “I didn’t even know what I was doing, but I blurted out $1,000. The guy looked at me and told me I was too young and offered me $200.”

Sand recalls being infuriated at the offer, feeling her time and effort had been undervalued. She shut her garage door and went upstairs, devastated. Later, the man apologised and offered to buy the piece again, but Sand refused. When he brought a cheque for $1,000, she grudgingly accepted.

“I’ll always remember that I sold my first painting to a man who thought I was too young to eat,” Sand said.

The artist got her first big break at Art Basel, an international art convention and showcase in Miami. By then, she had painted dolls throughout East LA and gained a modest following. Though she wasn’t scheduled to appear in the convention, Sand marched up to the exhibition organiser and told him she wanted to work for him. He told her that she could paint a wall and after she did, he hired her on the spot.

“I remember painting this mural, and honestly, it was ugly as s**t,” she said. “But in my head, it was perfect.”

It’s that kind of audacity, self-confidence and ability to ask for more that has helped propel Sand’s career. “I used to think that I was shy; I used to think I was ugly, that I couldn’t be an artist, but you have to act like you’re worth it, that’s the only way people will take you seriously,” she said. “Even when I had no idea what I was doing, I believed in myself.”

Sand stayed in Miami for two years, working with clients such as the NBA, Red Bull and Levi’s. At 19, when she started taking media interviews, she felt that things were getting serious. She started taking on more clients, found a lawyer and started making her art into products: her dolls found themselves on a line of T-shirts, pillows and socks.

Sand’s next project will be a three-storey mural in downtown LA. She say that for five months, she asked for permission almost every day before the owners finally agreed.

“I walked in that day and announced myself as the queen of street art in LA,” Sand said. “I remember thinking that that was a bit risky, but I figured, why not. Four hours later, I came out with a two-year contract.”

Her career has since come full circle. Sand now helps curate exhibitions and hopes to provide a platform for emerging artists, especially women and minorities. 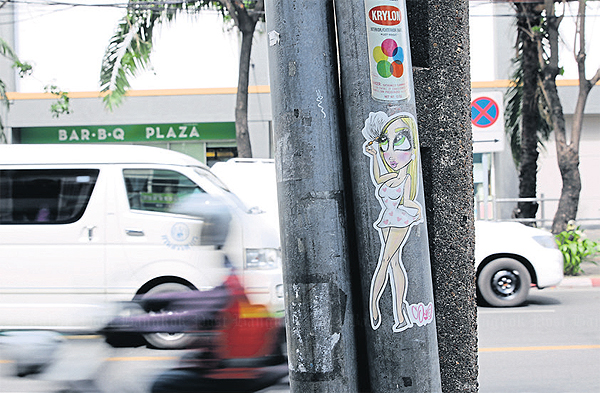 Sand is unabashed about what her art will be: cute and nothing else. She insists that she only wants positivity in her work, and nothing of her own struggles.

“When I got out of high school, I thought: how can I do something that doesn’t make me miserable? I don’t want to do art on train tracks. I don’t want to go to jail for this. I wanted cute,” she said.

“I’m not going to tell people my problems. I don’t want to give them reality, people don’t want that. Pretty dolls forever.”

At the Tesco Lotus food court, Sand runs around looking for mango and sticky rice, but can’t find the vendor. She opts for some shrimp fried rice instead. 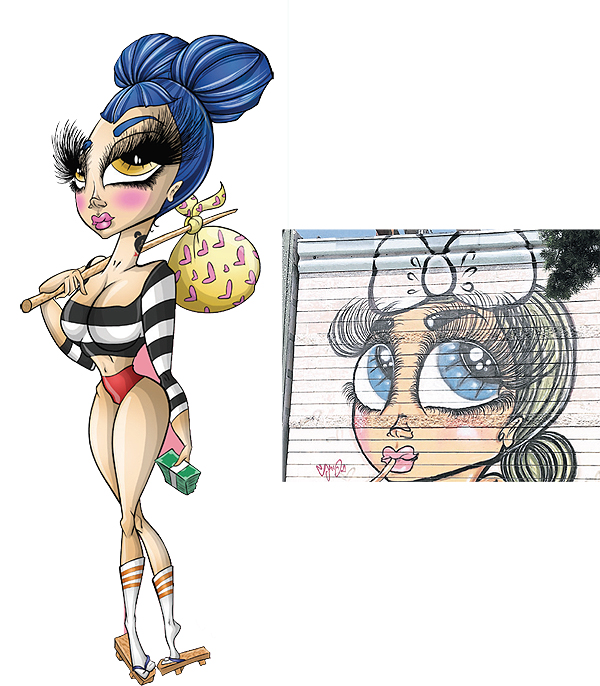 Sand has seen some graffiti around Bangkok, but not that many murals and street art. “There’s not a lot of craziness for street art here now, but I bet there will be more.”

She says that she can’t wait to go back to LA and paint what she has seen.

For a moment, she breaks from her enthusiasm and admits that, after a few fast-paced years, she is starting to worry about what’s next. “I feel old,” she said. “I’ve been successful, it’s been a good trip. Now what? What do I do?”

Apart from the mural in LA, she’s thinking of making some air fresheners and jackets. She might draw a new doll based on her time in Asia. 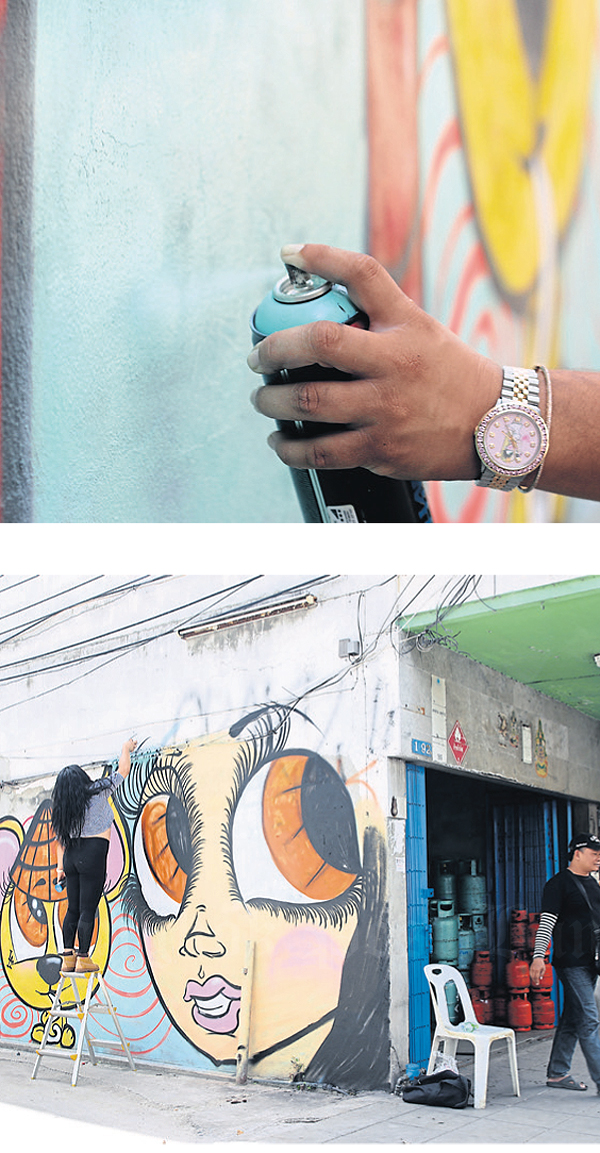 Eyes have it: Sand One’s art can be seen in East LA, above, while the artist’s latest mural in Bangkok can be found near the busy intersection of Rama I and Banthat Thong roads.