A tale of two cinemas

The old Nang Loeng cinema radiates a worn majesty, like an ailing yet proud grandmother who still presides over her household. Tucked inside the Nang Loeng community, a vibrant neighbourhood in Bangkok's old quarters, this is the oldest cinema in the country — and one of the world's oldest wooden movie halls. Nang Loeng cinema, or Sala Chalerm Thani, will turn 100 in 2018, and although the last film was projected here back in 1993, a plan to revive it and set the projector running again is in place.

The finer details of the renovation are being discussed now. The project is likely to be a collaboration between the Crown Property Bureau, which owns the building (while the land on which it sits belongs to Wat Sommanas), and the Film Archive (Public Organisation), which has conducted a thorough study about the conservation of the cinema as a cultural heritage as well as to bring it back to life.

The actual work can begin in a year, but every party involved — including the residents of the community — has agreed in principle that this is something that must be done, especially to mark the upcoming centenary of this neglected landmark.

The planned renovation received a big boost from a study conducted by Rungsima Kullapat, a Thai cultural heritage management researcher based in North Carolina. Delving into the social and architectural history of the cinema, as well as various legal and practical possibilities, the scholar concluded that the Nang Loeng cinema would be best restored as a "living museum", which functions in sharing the experiences, memories and history of the place, though the renovation will still focus on bringing back the cinematic elements of the place (the cinema seats, for instance). Her research also paid close attention to the physical structure of the wooden building and its outstanding architecture.

"So the conservation of Nang Loeng cinema means we're saving two things at once," Rungsima said at a seminar at Film Archive last week. "First, the technique and skills of the craftsman in those days, and second, the tangible theatre itself." 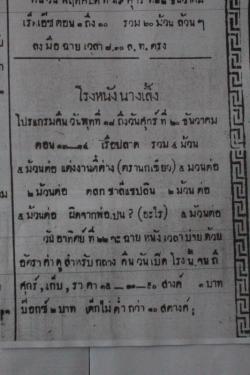 A newspaper advert for Nang Loeng cinema when it first opened in 1918.

The cinema seated 400 when it was in service, was built entirely of wood with a long-span structure resembling a barn or a rice mill. It's not a Thai-style building, despite the prominence of wood, and was clearly conceived with Western influences. The striking feature, Rungsima explained, is that there are no columns in the centre, a technique that maximised the functional space in the middle. In a movie house, it's obviously important that the audience sees the screen without any visual obstruction.

"The building method that was used to support the roof is called truss — or criss-crossing beams. This resembles the technique used in building train bridges, such as Rama VI Bridge," said the researcher. Rungsima also added in her report that "to achieve this, it's likely that someone with knowledge in civil engineering was there to supervise the construction, which was possibly carried out by local builders".

Old photographs from the mid-20th century show a platform stage and a screen at one end. The cinema originally had a dirt floor, before it was covered with cement during its last few functional decades. The family that leased the building from the Crown Property Bureau ran the cinema until 1993; since then it has been used as a warehouse.

The idea of reviving Nang Loeng cinema has been floated for two decades (director of Film Archive, Dome Sukvong, hosted a special screening here back in 1995). But over the years, no feasibility study has been conducted and that is often a requisite in transforming nostalgia into actual relevance. Rungsima's research emphasises that possibility by using examples of vintage cinemas in the US — those as old as or older than the Nang Loeng hall — and how careful renovation ventures could serve new audiences in the digital century, while maintaining their cultural and architectural identity. The Empire Theatre on Rhode Island, Rungsima pointed out, was a barn-like wooden structure built initially as a skating hall 133 years ago, but a makeover has extended its life, with a new projector and sound system — and yet the same wooden skeleton of the late 19th century.

An estimated cost for the makeover of Nang Loeng cinema is around 50 million baht; the wooden structure of the place is still strong, though a lot has to be done to transform the space into a functional one, including a new air-con system and security precautions. Once the renovation begins, it will take around a year to finish. Considering that a new subway line will soon be completed near Nang Loeng, the timing is right.

What's underlying all of this, however, is not the architecture or the films, and certainly not the commercial viability of the resurrected cinema. It is the fact that Nang Loeng cinema is a cultural centrepiece and an inseparable part of the community — the proud grandmother watching over at least three successive generations.

"People in Nang Loeng have a special connection with the cinema, even though they were born after it ceased to be a cinema," said Suwan Waewploygnam, a resident of Nang Loeng who attended the seminar last week. "Even though it's not actually our cinema, we feel that it is. Some people who moved out of the neighbourhood still talk about it and remember it. The plan to revive it should bring good things to the community."

Whether Sala Chalerm Thani can make money or not once it's brought back to life is not the point either. "We think about profit and loss too much sometimes," added Rungsima. "But we're preserving a memory."

Chalida Uabumrungjit, deputy director of Film Archive, echoed that thought: "If we think about it in terms of finance, yes, this is a loss from the very start. But the cultural value of Nang Loeng is immeasurable, and that's the main reason we're determined to push this project through." 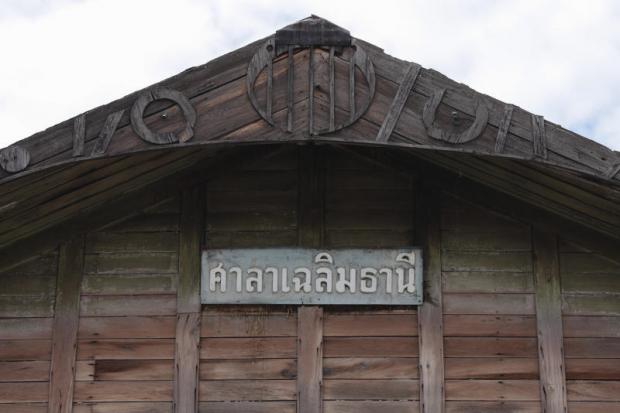 If renovated, Nang Loeng cinema will become the oldest in Asia.