British lyricist and executive producer William Robinson fell in love with the sounds and songs of the Northeast, which inspired him to set up a project that fuses Western and Thai music

Thailand's northeastern musical instruments create a chorus of foot-stomping sounds that showcase the crux of the region's rich cultural and historical heritage. Isan music and its rapid-fire rhythmic vocals and funk-like beats have steadily gained the attention of Western producers, one of whom is British lyricist and executive producer, William Robinson.

In the music business since 1993, Robinson has collaborated with big names such as the late Robin Gibb of the Bee Gees and has also penned the Glory, Glory Man United Medley, which featured Korean violist Jenny Bae, among his long list of achievements. More recently, he is the CEO of Thai-based record label, Tune Asia.

Robinson encountered Isan music five years ago while walking on Sukhumvit Road. It was here that he bumped into an Isan band performing for money. Little did he know that this chance meeting would inspire him to set up his "Isan Project", a collaboration of Thai and Western music that is available for download. Its aim is to combine traditional Isan musical sounds with modern Western lyrics and music, and eventually take it to the world stage.

The music executive was then introduced to Thai musicians Fatboyz Ford and Koh Mr Saxman, who helped him understand more about Isan music. After attending numerous local gigs, he decided to visit the Northeast. It was during this period that Robinson brought along a camera crew to create a video blog. He started to develop a few of his own musical ideas, utilising sounds from Isan and fusing them with the contemporary music heard abroad.

Robinson explains the three encounters he had that brought about the Isan Project into existence.

"My holiday in Thailand that led to my walking on Sukhumvit Road where I saw these Isan street buskers was probably the first of three," he said.

"The phin drew my attention immediately and I filmed the band on my phone and took it to play to my co-producer Michael Graves. This was a new experience for me and a new sound and it's a handmade instrument.

"I listened to Isan music, firstly in taxis. Then I bought 500 mp3's from Fortune shopping mall. The luk thung singer Ratchanok Srilophan was a great inspiration. Then I went to Isan with a crew to check out what is going on in Isan with the plan of recording a song. I discovered the Isan spirit, the people, the culture, the food, the dances and the fashion.

"I would best describe the Isan Project as a collaboration of Thai and Western music featuring the sounds and style of Isan.''

Asked which Isan instruments are the most melodic for him, Robinson said the phin, a Northeastern lute with a pear-shaped body. Also the wode, a vertical flute, made of six to nine small bamboo pipes of various lengths, which he has only used once but can't wait to record again.

Then there is the pong lang, a xylophone-like percussion played by two players with hard sticks. Robinson used this in a new song called Beautiful Heart. "For me it brought a karma to the song, a distinctive sound."

The Isan Project brought together a number of creative minds. "For the song Forever, I asked Ford and Karista Thongpae, or Jang, to write the Thai lyrics. Mariam from the band B5 sings the song in a duet with Richie Dews. I co-produced this song with Michael Graves, then I sent the parts to two re-mixers for different dance versions, I then produced a video which included the Isan/Western styles by choreographer Jermaine Browne. The video was shot in Bangkok, Wat Muang and New York.

"I co-wrote the next three songs with Ted Nilsson and Errol Reid and was the executive producer on these three tracks. Strangers, Beautiful Heart and Nana. My inspiration on these three songs among others was the natural attraction of the Red Lotus Sea in Udon Thani.

"The song Nana was my idea and a concept about the Nana district of Bangkok which feature the words of the skytrain's recorded message -- 'Next Station -- Nana'. Some people laugh when they hear this on the skytrain. This song was sung by Errol Reid and Pui Duangpon Pongphasuk.

Robinson said that during his travels to China, Hong Kong, Malaysia, Singapore, none of the music he heard quite matched the Northeastern melodies, even though some of their sounds remind him somewhat of what he heard in China.

The rise of Thai country music in the global context has been going on for a while, thanks to Zudrangma Records and events such as Paradise Bangkok, as well as the growing fame of Paradise Bangkok Molam International Band, which has toured many European countries. The addition of Robinson's Isan Records is likely to add to the buzz.

Songs from Isan Project can be downloaded from iTunes Thailand. An album is in the making and should be completed in six months. 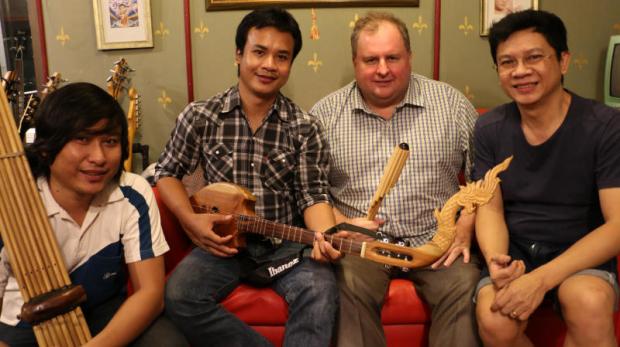 Will Robinson and Isan musicians.