Well, sort of. Coles' latest exhibition, which opens tonight at the Brainwake Cafe and Gallery on Sukhumvit 33, features six paintings of flowers and a butterfly. The title of the exhibition reflects Coles' slight change of direction -- "Flowers, One Butterfly And The Bangkok Night" -- but the artist's many fans need not worry as there are also 16 paintings of the Bangkok, Pattaya and Phnom Penh bar scenes.

The long-time resident of Bangkok has a "For Sale" sign on every item on display at the exhibition, so there is a strong chance some of the works will be gone not long after the show opens at 7pm.

British poet John Gartland will also be reading some of his work at the show, mostly from his contribution to the book Bangkok Heart Of Noir, which also featured some of Coles' paintings.

Coles, a former filmmaker, has been capturing the seedier side of Bangkok on canvas for many years and his work can be found in some of the establishments he's painted. 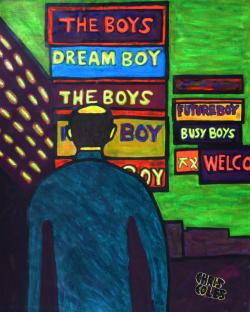 But recently he switched subjects and did something different, something his mother back in Maine can show her friends -- flowers and a butterfly.

"I did do this latest work with my mother in mind, although I was aware that many of the German expressionists had applied the style/genre to flowers, especially my Expressionist hero and mentor, Emil Nolde," Coles told the Bangkok Post.

Nolde was a German/Danish painter and one of the first expressionists of the 20th century.

"Many of my expressionist-style noir paintings are drawn from the context of the Bangkok night, a vast, multilayered entertainment spectacle that involves all manner of people from Southeast Asia, Asia and the entire world," says Coles.

The majority of Coles' paintings depict a side of life in Southeast Asia that is not promoted in the tourist brochures, but involves a lot of people, and money. And over the years Coles' bright, neon-like paintings of bars, the girls who work in them and the customers and characters who frequent them have steadily grown in popularity. A lot of people from different walks of life have become fans of his work.

"Chris Coles shows the other side of 'Thainess', the one that's not so rosy and pretty as the government would like to portray but certainly reflective of the reality…but he also shows that what appears at first glance to be ugly and dark can also be beautiful," said Bangkok Post columnist and TV and radio show host Suranand Vejjajiva.

"Chris Coles' beat is the expat neon triangle, Soi Cowboy, Nana Plaza and Patpong, where the wildlife gathers at the waterholes in the cool of the night," wrote Paul Dorsey, author of the Dali House blog.

The "Flowers, One Butterfly And The Bangkok Night" exhibition starts at 7pm tonight at the Brainwake Cafe and Gallery on Sukhumvit 33.