Our cinematic monument of majesty, the last palatial cinema house in town, the Scala on Siam Square stands alone in defiance and melancholy as a remnant of a different era. As its fate -- the spectre of eventual demolition -- keeps popping up in the news every few years, the movie house is now the subject of a documentary film. The Scala, directed by Aditya Assarat, is part of a pan-Asia ensemble called The Power Of Asian Cinema that will screen as the opener of the 6th Salaya International tomorrow.

The elegantly curved staircase, the art nouveau chandelier, the vaulted ceiling -- these familiar sights for Scala visitors will of course be recorded in the first-ever movie about the place. But Aditya, the director, didn't approach the 47-year-old venue with that romantic sensibility. Instead, this is a documentary about the building but also about the humans inside: The Scala is told largely through the life of its four employees, a projectionist, a technician, a caretaker and the general manager.

"Like most people, I feel sad that Scala is likely to go away, sooner or later. This is a place with an expiration date hovering above it," says Aditya.

"What catches my attention every time I come to see a movie here is the sight of old staff members in their old-fashioned uniforms. There's hardly a young employee here. And I learned that the reason the owner still operates the cinema is to keep the staff on the payroll, to make sure they still have a job. The place is run like a family business. It has a certain value we see in the older generation. It is, to me, a business that runs as if we were still in the last century."

The cinemas around Siam Square -- Scala, Lido and previously Siam, which was burnt down in the 2010 political mayhem -- are run by Apex, a company that has rented the space from Chulalongkorn University since the 1960s.

Apex's current president is Nanta Tansacha, an elderly dame whose father, Pisit, built the late Siam Theatre in 1966, followed shortly by Lido and Scala. It was a glory decade of grand cinema architecture; Scala initially seated 1,000 before the front section was slightly reduced.

The Tansacha family's main business, however, is the successful Nong Nooch Garden, a resort near Pattaya. It is generally believed that the Tansachas still run Lido and Scala -- despite them no longer being cash cows, and despite the constant dread of eviction by Chulalongkorn's Property Management Office -- to preserve the family legacy and to ensure the employment of their ageing staff members.

In recent times, Chulalongkorn has usually extended the rent contract with Apex by a few years at a stretch. The current one will expire in 2018, at which point the fate of Scala and Lido will be decided again.

"The documentary will not discuss too much about the history of the place," says Aditya, whose previous feature films include Wonderful Town and Hi-So. "I'm more interested in the people working there, and the film follows the four employees around in their daily life. Most of the staff have been there for decades, so I thought it would work as a human-interest story about a group of people doing a job that's no longer important or necessary. I thought it would serve as a symbol for the physical cinema and even the idea of 'cinema' as a whole."

One of the employees featured in the documentary is its caretaker, a man who's actually more like a blue-collar manager, said the director, because he does everything from sweeping the floor to washing the head-cover cloths. He even sleeps in the cinema, upstairs. Another employee is a projectionist who has worked from the era of celluloid film to the current one of digital projection. Though he set out trying not to be romantic about Bangkok's last stand-alone cinema, Aditya admits that the dust of romance and nostalgia inevitably gets in his eyes. Partly because it's quite certain that the place will not stand where it is forever, and partly because the director believes that movie theatres in general -- and the antiquated establishment such as Scala in particular -- are being swept past by technology and the new way moving images are served to their audiences.

"What Scala is doing is something from the past," says the director. "Movies are now being consumed largely on TV and phone screens. I believe that's the way of the present and the future."

will open the Salaya International Documentary Film Festival tomorrow at 1pm, at Film Archive in Salaya. Free admission. The festival, which shows documentary films from around the world, runs until April 4 at Film Archive and Bangkok Art and Culture Centre. See full programme at facebook.com/SalayaDoc. 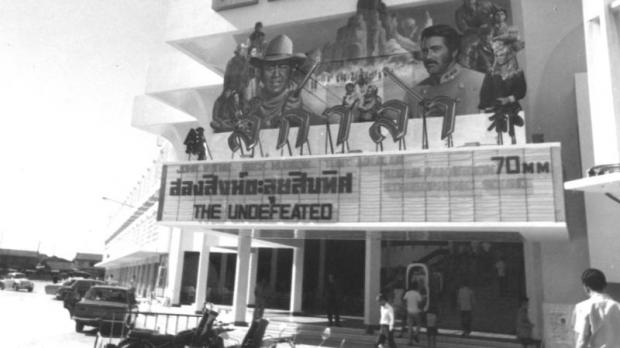