It's been quite a ride for Bangkok's main railway station. Life looks back at its history, and what's in store for the future

Standing as a faded landmark of the capital, Hua Lamphong will turn 100 this Saturday. Over the century since it opened in 1916, Bangkok's central station has become more than its original function as a hub for commuters and trains. Hua Lamphong has become an architectural treasure, the arrivals lounge for workers who've come to try their luck in the city, a living museum of Thai life, a grand old building of hope, dream, loss and now, of change.

The station will celebrate its 100th anniversary this Saturday with various activities from 9am-6pm. Apart from showcasing State Railway of Thailand (SRT's) work over the past 100 years, the highlights include traditional Thai ensemble shows as well as a display of different types of train bogies.

At a time when Thailand still waits for high-speed trains and when the SRT has faced much criticism over its operations, Hua Lamphong will also go through some major changes, notably the plan to move the main station to Bang Sue. Before that happens, we take a look at Hua Lamphong's past, present and its future. 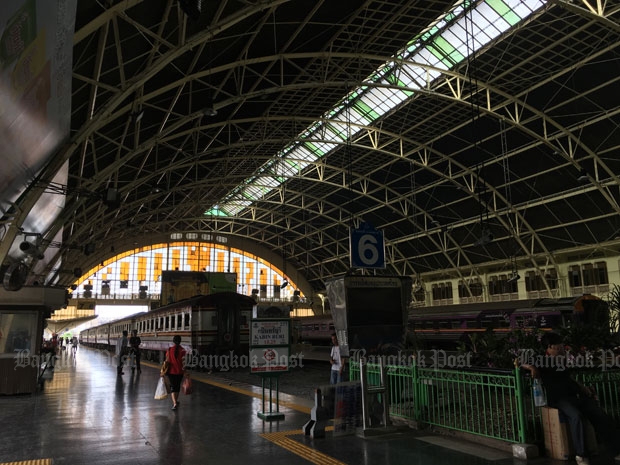 The arched roof and stained glass of Hua Lamphong are similar to train stations in Europe.

The place and the quarter

The architecture of Hua Lamphong is clearly influenced by European train stations. The structure is divided into two main parts: the front building and the station hall. The first part was designed by Italian architect Mario Tamagno, who worked for the Siamese government. The station hall, which had been finished earlier, is steel-structured with an arched roof, with the two ends decorated with stained-glass windows.

Over the years, the station has been constantly renovated -- including a big repair after a shocking accident when a driverless locomotive rammed into the hall in 1986. Today, the waiting lounge is air-conditioned. The building has also been repainted to match the original colours.

Thai trains, and the single track, have not seen much modernisation over the past century. Hua Lamphong saw fewer passengers in the decades when cars and buses offered more convenient long-distance transport -- then came the boom of low-cost airlines. But then, train rides are cheap. In 2008, the government's free train policy (third-class only) helped boost the popularity of this mode of transportation, despite other drawbacks such as tardiness and unreliability. That year alone, the number of passengers in Hua Lamphong increased by over 350,000 from the previous year.

As the city's main entry point, Hua Lamphong welcomes all kinds of travellers, and the area around the station has developed a unique charm. There are rundown buildings, dubious joints and cheap hotels, but also stylish stops aimed at foreigners and younger commuters.

As night falls, mysterious som tum and ya dong (herbal liquor) hawkers start to occupy the space in front of Hua Lamphong MRT and the soi behind the station. Food and drinks are not the only selling points, since the female vendors and male customers can sometimes negotiate other services. This has gone on for at least a few decades. Once in a while, business disappears from the scene when the authorities actually carry out their duty. 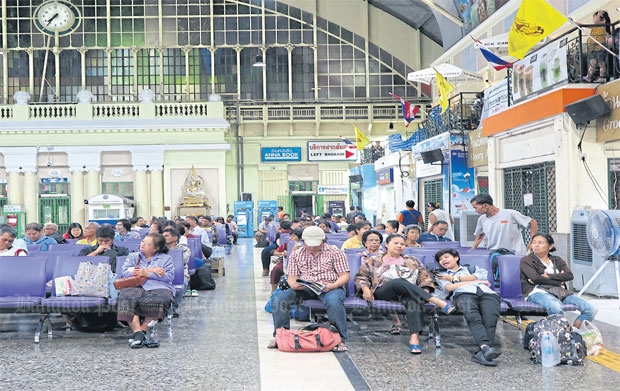 Over the past several decades the station has served as a point of arrival for rural workers who come to the city to seek opportunities and employment.

In the 1980s, many commercial buildings in the neighbourhood were job recruitment centres that scooped up fresh arrivals and fed them to factories and other labour services. Today, we can no longer spot many such services. Since 1993, the government-run Employment Office Area 4, under the Department of Employment, is located right in the station and has provided assistance to job seekers.

"In the past we could get 20 to 30 people per day. Now it's 3pm, and you are the first one who visited us today," said Ratchapon Tajinarat, a staff member at Hua Lamphong Employment Office who has been working with Department of Employment for over 10 years.

"Communication and technology are important factors. Most people now prepare in advance on where they are heading to for jobs," he added. "Now most people who come to ask for our help are older people."

However, not everyone is looking for work: sometimes they just want to get a meal. The office often gets reports from employers that their new employees have not turned up. And those people often turn up back at the station the following day.

One of the employment problems, Ratchapon said, is scam services conducted illegally. Once an person agrees to do the job, the actual job is not as advertised. 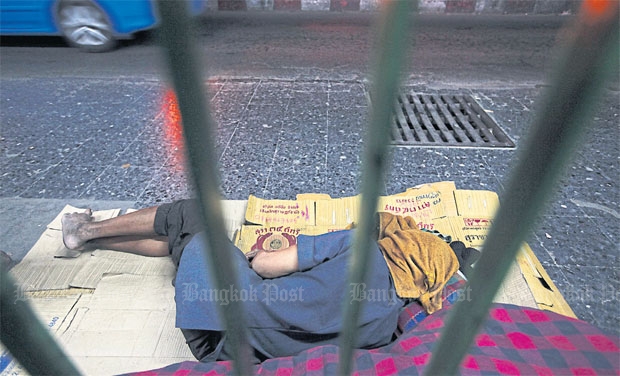 Hua Lamphong is a place of transit, but for many it's also a place to stay.

This century-old station has become a hub for the homeless. The area around Hua Lamphong may give off an unpleasant aura to those who pass through it, but for those who have no place to live, the station is where they feel safe.

During day, the waiting area in the main hall of course has passengers, but also some homeless people hanging about, a mix of people from all walks of life. As night comes and the waiting area is closed, the station is a shelter where many people spend the night.

Yanyong Boon-Long, an architect who is an adviser of the same project, added that due to the trains' lack of punctuality, passengers often have to spend an indeterminate amount of time in the station. They sometimes sleep in the waiting area.

"When passengers sleep there, it's possible that the homeless feel they blend in with other people," said Yanyong.

Hua Lamphong is also known as a haven for street children. But walk around the area, and you may not spot as many idle youths as you may have imagined.

"Co-operation between the government and the private sector, both in Bangkok and other provinces, has helped solve the problem," said Thanarat Taraporn, a teacher at the Street Teacher project under the Foundation for the Better Life of Children, who has worked to lift up children's life quality in Hua Lamphong for 16 years.

"When we first started, there were a number of street kids around the area. Most of them caught a train from their hometown to the city. Train is the easiest mode of transportation as people can get on without getting caught. They slept in train bogies, washed at the faucets in the train storage area, made a living from selling bottles or things people forgot. Some were also drug addicts.

"To make them trust us and give them freedom is the key to get them to join our foundation. The faster we find them, the better chance in life they have."

Hua Lamphong will only operate some short routes and will be transformed into a museum.

SRT's deputy governor Thanongsak Pongprasert updates us on this issue.

"Bang Sue is now under construction but it will probably be ready by the end of 2020. There are three contracts involved in this project, and the process might take some time," explained Thanongsak.

Julsiri Viriyasiri is head of Rodfai Thai Club and son of Sanpasiri Viriyasiri, a great train-lover who founded the now-defunct Railway Hall of Fame. Over the years, Julsiri has been watching the progress closely and he agrees that the rail traffic in Hua Lamphong is very congested. The idea to move the main station elsewhere is the right direction to take.

"Bang Sue is a good choice as a new main station," said Julsiri. "Hua Lamphong will be good as just a museum. But of course, Bang Sue will have to be ready first and it doesn't seem like it will be any time soon.

"There was a plan to move the station to Bang Sue, during Sarit Thanarat's government. It didn't work out."

Yanyong, the architect who is interested in public transit, suggested another angle for the future station. For him, moving operations to Bang Sue is not the most important issue at the moment. "The location of Hua Lamphong is convenient. People can easily connect with other modes of public transport, like the city rail system and boat service at Klong Padung Krungkasem, and it would even be better if the boat service on the klong can connect with the service on the Chao Phraya River at some point in the future," said Yanyong.

"What they should consider now is developing a system that notifies passengers exactly when their trains will arrive, so they can estimate the right time to be at the station. Then the waiting lounge doesn't have to be so big.

"Some parts can be turned into commercial areas. And the revenue can subsidise SRT projects. For instance, reducing ticket fares of trains run by the SRT so that they are affordable to the public."

A century has gone, but the new century of Hua Lamphong is about to begin.