Bangkok's art scene keeps getting bigger and better, as today, Brian Donnelly, aka KAWS, the artist, toymaker and brand, is visiting to drop his latest merchandise and unveil his biggest sculpture yet: BFF.

Collaborating with AllRightsReserved, KAWS will launch the furry, 8m-tall statue that will stand outside Central Embassy until July 31.

An acronym for "Best Friends Forever", BFF is redolent of the pure, innocent and lasting friendships of our youth, represented by the muppet-like figure that almost all children are familiar with.

Boasting KAWS' trademark soft skull, crossbones and crossed out eyes, the unveiling of BFF will also mark the worldwide launch of KAWS' BFF merchandise, featuring tote bags, umbrellas, and T-shirts and a 20-inch BFF plush toy (only 1,000 available worldwide). It doesn't end there, as KAWS fans can get to see his art prints exhibited inside Central Embassy's Level G Atrium, as well.

Having just finished his first UK exhibition at the Yorkshire Sculpture Park, the New York based contemporary artist, loved by both the art, collectibles and mainstream market, is known for his bright, playful and rebellious artworks.

Starting out as a graffiti artist in New York in the early 1990s, KAWS subverted advertisements and pop culture figures on billboards, phone booths and bus shelters, slowly gaining a fan base and notoriety that resulted in his works being increasingly sought after.

By the late 90s KAWS had a chance to work with Japanese toy and clothing company Bounty Hunter to create his own limited edition vinyl toys, reworking pop culture icons like Mickey Mouse, Bugs Bunny and the Michelin which became a massive hit. Only in the past decade has KAWS turned these toys into supersized sculpture works, and has risen to become one of the most sought out artists in the world. He has collaborating with companies such as A Bathing Ape, Nike, Vans and Comme des Garcons and has had numerous solo exhibitions all over the world.

KAWS: BFF Merchandise will be on sale from 10am at Siwilai Store, Central Embassy. KAWS: BFF installation and exhibition will run until July 31. 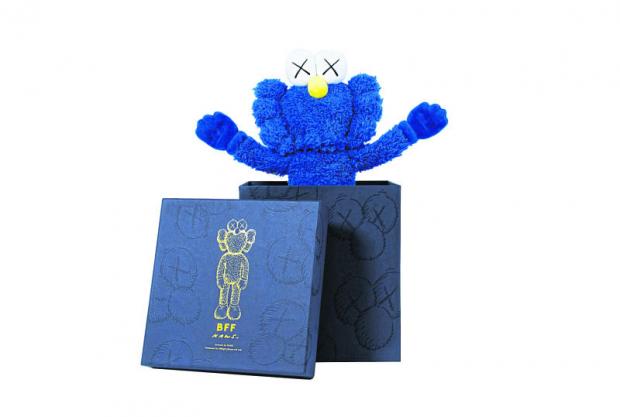