From an ornamental plant introduced into Thailand by the royals, water hyacinth has become the No.1 environmental nuisance

After declaring war against corruption and mafia, Prime Minister Prayuth Chan-o-cha has launched a new battle against the floating water weed phak tob java. The thick, green mats of the aquatic plant have choked Thailand's canals and rivers for more than a century, and since the rainy season started, the army and local administration have been ordered to get rid off the expansive profusion of hyacinth from the Central Plains waterways within 10 days.

Soldiers, heavy machines and boats have been deployed to collect 50,000 tonnes of the water weed that clogged above Chao Phraya Dam in Chai Nat province. Massive sheets of water hyacinth often drift there, forming an impassable raft sometimes as long as 3km. That area in Chai Nat is where all canals and tributaries of the Chao Phraya River merge, and the thickness of the plant blocks water draining. Water hyacinth grows fabulously well in the middle region of the country because there are numbers of fish farms along the river, discharging chemical substances that feed it.

Last week the prime minister issued a directive for the army and local administration to collect 120,000 tonnes more of the weeds covering the Chao Phraya River in Ayutthaya province. Like incorrigible enemies, after the mass collecting on Aug 10, there was a report last Wednesday that a massive carpet of water hyacinth has appeared in the Chao Phraya again.

Water hyacinth is not just a floating plant that can be scooped up and thrown away, she said.

"It is a genius plant. If you cut water hyacinth, you actually help it spread its seeds and it'll grow faster. This plant is a survivor, it can adapt. If there is water, it will live but if the land turns dry, the water hyacinth will adjust to stay on land and become part of mud and soil.

Phak tob java is the Thai name of the aquatic plant that originated in the Amazon River Basin in South America. It was introduced to other parts of the world as an ornamental plant, and over a century the water weed -- known as one of the fastest growing plants the world ever knew -- has choked rivers and lakes in many countries, such as the Tonle Sap in Cambodia or Lake Victoria in Congo, as well as rivers in Australia, waterways in Louisiana and of course canals and rivers in Thailand. It has become a major cause of water pollution and worsens floods. Tangled up into dense mats, it covers the river surface, blocking sunlight from reaching native aquatic plants and reducing water oxygen, which can lead to the death of fish. The water hyacinth sheets also become a blockade for boats, and prevent water from flowing into the sea. The plant withers and eventually dies in sea water.

Ugly in its mass, the water hyacinth can be gorgeous in detail. With its exotic velvet flowers and heart-shape leaves, and the entwining elastic stems, water hyacinth is however one of the worst alien species. Phak tob java can reproduce by cross-pollination or by self-cloning. Each weed can produce 5,000 seeds, and each seed will live for more than 28 years. In water, a single weed tree can grow into 15 within 20 days. Leave 10 weeds to grow for a year, you will get a million water hyacinths, according to the state's information.

It was recorded that the water hyacinth was introduced to Siam in 1901 by royalty who found the weed during a visit in Indonesia -- thus the name phak tob java. Because of its strange beauty, water hyacinth was put in a jar for display in mansions before the plant was accidentally dumped into a canal by flooding. From there, it proliferated into a near-unstoppable menace. The authorities have always been trying to get rid of it: in 1913, King Rama VI passed the Water Hyacinth Disposal Act. The law imposed fines and penalties on those who fail to take care of the water hyacinth (the law was revoked in 2009 due to its impracticality). Subsequent governments, civilian or military, have waged battles against the plant, without much success.

But the plant is not all evil. There are many researchers and local craftsmen trying to utilise the abundance of the weed. Phak tob java is edible, and it is also a material for animal feeds. It can be used as a natural filter to absorb toxic substances in waste water; a royal initiative project at Beung Makasan in Bangkok has used water hyacinth to help treat waste water in a pond. The fibre from water hyacinth can be used to make furniture and woven baskets, bags or even paper (see sidebar on page 1). Water hyacinth also has huge potential to be used for organic fertilisers or soil nourishment.

Researchers at Kasetsart University have worked on a method to turn water hyacinth into cooking gas. The research won a National Research Council of Thailand award in 2015. This year the same team won the award for applying the technology to educate local communities to produce cooking gas from the plant.

Currently, there are regular workshops to train local communities along waterways to produce cooking gas from microorganisms and water hyacinth. The workshops are under the wings of two royal initiative projects, "Friends In Need Volunteers Thai Red Cross Project," and "Miracle of Life Foundation" under Princess Ubolratana.

Assoc Prof Jureerat Leesmidt, lecturer on molecular genetics at Kasetsart University and one of the team's researchers, said she believed the solution must be rooted in the right attitude towards the weed.

"You cannot destroy water hyacinth but you can control it and make use of it," said the scientist. "And if people start to look at it rationally, the weed is not a villain but a resource full of other values and potentials. The real problem comes from the fact that its growing rate surpasses consumption."

She insisted the sustainable way to deal with the water hyacinth is to educate society.

"If villagers know that this weed has a lot of value, they will see it as an opportunity." 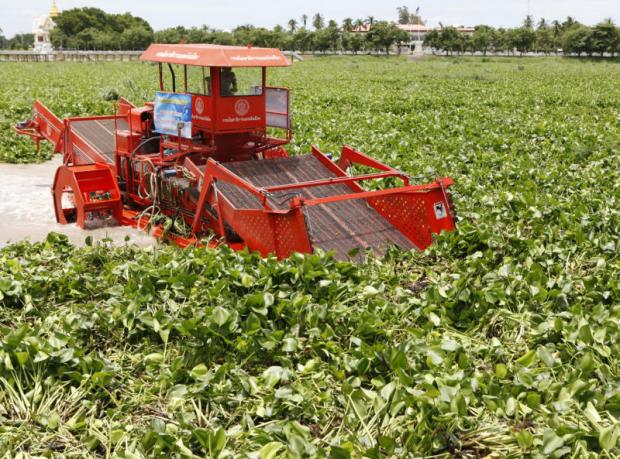 Making the least most