Retirements, red tape and rain conspire to ruin a weekend lecture, but one R-word is notably missing.

The older woman appears at the classroom door five minutes into the lesson, staring blankly at us all. Her hair is short and held back by a colourless hairband. Her faded clothes complement her displeasure, and there is a permanent downturn at both ends of her mouth. It is difficult to discern whether the blank look is one of disapproval or disinterest. We are about to find out.

Our lecturer pauses mid-sentence, then glances over to the apparition behind the glass of the door, which is her cue to enter.

"This room hasn't been booked for a lecture," she says.

"Our room was locked, so we took this room instead," says our lecturer.

"Yes, but this room hasn't been booked for a lecture," the woman repeats.

"We were locked out of our room," says our lecturer. "Rather than cancelling, we found this room was empty and took it instead."

Such circular conversations are common in Thailand, but here it is lecturer versus maid, two vastly different points on the Thai class scale, so it is inevitable the circle must break soon.

It is Saturday afternoon and your columnist is sitting in a university classroom trying to understand the subject Statistics in Educational Research. I am studying for a master's degree, my latest project that seemed like such a good idea at the time. It requires me to sacrifice two years of weekends, substituting drinking sessions for study groups. If there is any downward fluctuation in Absolut stocks, you will know why.

Statistics starts at 1pm and finishes three hours later. It is a subject that requires extreme concentration, a calculator and a bottle of Tylenol. But last Saturday a crisis occurred: somebody in the upper echelons of the university retired … and that somebody didn't unlock our lecture room door, leaving all 21 students and our statistics lecturer stranded outside the room.

The upper echelons? Isn't unlocking lecture rooms the work of the lowly admin staff like the maid at the door?

Perched at the very top of this hierarchy are the maids and technical staff. These people are responsible for turning on air conditioners, switching on lights, firing up computers and ensuring the sound system is at proper volume. The dean can take a sickie and that doesn't affect me in the slightest. But what about when the guy who unlocks the doors retires?

Thus in the scenario between the lecturer and the maid above, the maid was the upper echelon.

On Friday 22,959 Thai civil servants collectively packed their bags and left their offices for the very last time. That is a sizeable chunk of Thailand's 2.19 million civil servants. It happens every Sept 30.

When civil servants turn 60, they celebrate the end of decades of pushing, shoving, needling, cat fighting, bitching, slapping, crawling, back-stabbing, office politicking and sycophanticising as they work their way up the civil service ladder. Our lecture was thwarted by one official retiring, but we are not alone. All over the country it is impossible to get anything signed or approved (or unlocked) at this time thanks to people retiring and not wanting to take responsibility, or those assuming new positions and not wanting to take responsibility for old projects. 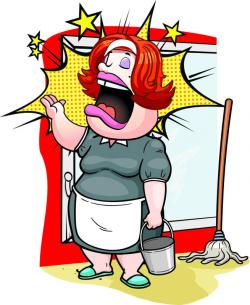 The keys are still there; in fact, we can see them. When we ask the chief security guard to unlock the door, he looks mortified and shakes his head. "I cannot be responsible for that," he says.

Responsible. The word is rup pid chorb in Thai. What an interesting, and maddening, glimpse into the psyche of workers in this country; that responsibility is a dirty word.

In the Western word, responsibility is something we aspire to, isn't it? The more we have, the greater a person we are.

It is not the same here. Rup pid chorb is a dirty word, often equated with the dire consequences of something bad, such as having to pay money or being put in the spotlight for a decision you made.

It is this negative aspect of the word that embroils the maid at the top of this story. We have barged into her terrain, switched on the lights, fired up the computers, turned on the air conditioning and even managed to get the speakers going all by ourselves. She was extraneous and, worse, uninformed.

Our enterprise takes on frightening proportions because it was outside the line of authority. What if a fuse blows in the speaker system? The red tape to get one replaced would be horrendous for that woman, not to mention having to be responsible for it since she tacitly allowed us in. She might even have to pay for it herself.

Outside the original locked room, the security guard cannot rup pid chorb the simple act of unlocking a door. We feel frustrated and infuriated. And worse -- it is now starting to rain.

There is an adjacent building full of classrooms. Despite three rooms in this building being unlocked and unused, the technician there tells us we cannot use a room. We haven't signed for one in advance. "It is my responsibility if something goes wrong," the technician tells our lecturer over the phone.

"This is nonsensical," says our lecturer. "Come on, students. We're going over there."

And so we all march over in defiance of the upper echelon. Earlier that day we studied Thomas Hobbes's Leviathan in philosophy; he would have disapproved of our actions, but sometimes you just have to stage an uprising.

We enter the first empty room, switch everything on ourselves, and our lecture begins. Five minutes later, the blank woman, who is the maid responsible for that room, has appeared.

"If you stay, and somebody finds out, then I will be the one who is punished," she tells us, three times in a row, each time finishing with: "It is not my responsibility."

Then she glances at the lights, and the air conditioning, and the speaker system and the computer. A look of horror crosses her face.

"Who turned all these things on?" she asks, slowly but chillingly. Now we are in big trouble.

"The lights can only be turned on by the technical staff," she says. "Or me."

Despite her threats, it is clear we are not budging. Besides, it has started to rain.

As the only farang in the room, I consider assuming the role of bad guy and saying something like: "Listen, lady. Take you and your alternate universe glad rags out of this room and let us get on with the task in hand. This is an institute of higher learning!" But before I can even mouth the word "Listen" she has turned to leave.

"Well, all right, I will go," she says finally.

"I'm just saying, I'm the one who will get into trouble, and it's not my responsibility."

More silence from us.

"I don't want to be the one who gets into trouble," she repeats.

She pauses and gives a shrug of her shoulders.

"I don't care," she says, looking at us with mild disgust and yet with a glint of triumph. "I'm 60 years old. I'm retiring this Friday."