Giving names to the nameless

Thongchai Winichakul just turned 59 this past Saturday, but the bloodiest moment of his life took place when he was a student 40 years ago. Now a successful scholar, the black hole remains even though he maintains that he has "dealt with that historical trauma" through a mechanism of rationale -- and never vengefulness.

Somehow, he said, it was unconsciously "healed".

"I don't know how it's called -- trauma? But it was dealt with over time. Perhaps months after the 20th commemoration of the Oct 6, 1976, my wife noticed that my nightmare had gone," said Thongchai, a Thammasat student leader and retired professor at the University of Wisconsin-Madison, where he had taught for 25 years until this June.

Regarded as the voice of reason and a human testament of the Oct 6 atrocity, Thongchai's humanist grasp of the incident that resulted in at least 46 people killed, with some being raped, hanged or burnt to death, has never stopped him from pursuing the quest for justice, even after 40 years. Thongchai was a sophomore at Thammasat University and a core student leader holding ground in the compound when the police crackdown took place -- who ordered it remains a mystery -- against thousands of students on campus.

"There's not a single day that Oct 6 doesn't cross my mind," said the bespectacled scholar, one of the world's most respected academics on Thai history. Hailing from the neighbourhood of Tha Prachan, Thongchai, though spending years living and teaching abroad, is still "driven" and "motivated" by old memories around his old haunt.

The atrocity 40 years ago was one of the darkest chapters of modern Thai history. The students were protesting against the return of Field Marshal Thanom Kittikajorn, who left the country three years earlier after the popular uprising of Oct 14, 1973; but it was the toxic cocktail of right-wing propaganda and communist scaremongering that fanned the flames of hatred.

Disillusioned and crushed by the right wing, tens of thousands of students, farmers, unionists and activists left home after Oct 6 and headed into the jungle to join the communist movement and take up arms against the government. They would remain there for many years.

Thongchai was arrested and jailed for two years. He was released along with 18 other prisoners of conscience on Sept 16, 1978, after Amnesty International pressured the Thai government. He then completed his degree at Thammasat and obtained his PhD at the University of Sydney.

Over the years, he proved his doubters wrong. One of the accusations thrown at him was that he was too "obsessed with historical baggage, so much so that he could not succeed to move on".

Thongchai became an internationally-acclaimed intellectual especially after his magnum opus Siam Mapped: A History Of The Geo-Body Of A Nation came out in 1995. The English-language book is one of the most important accounts of Thai history, a seminal historiography in which Thongchai delivers a sharp analysis of nationhood, identity and the making of modern Siam. It was awarded the prestigious Harry J. Benda prize in 1995 by the Association of Asian Studies.

In 2003 he was elected to the American Academy of Arts and Sciences. He later received the John Simon Guggenheim Award for his work as an academic.

Despite all of that, the history professor, whose parents were illiterate Sino-Thais who raised 10 children, remained unfulfilled. There's still a hole inside him, and that drove him to continue the journey -- to remind society of the Oct 6 massacre, an event that remains obscure and unknown to the younger generation.

Thongchai and his friends are working now to materialise something basic but long overdue: to honour the people who fell victims to the fatal crackdown 40 years ago. They are compiling scattered facts and digitising them to keep it in a systematic manner for future studies.

"Thai society is made to acknowledge that the student uprising of Oct 14, 1973 [students rising up against military dictatorship] and the Black May 1992 [Bangkok middle-class against the military] contributed some positive changes. The Oct 14 victims even got state-sponsored rituals and monuments -- of course over years of pushing."

But the Oct 6 bloodshed is totally different. Officials and politicians -- when in power -- always tried to distance themselves from it, noted Thongchai.

"They just don't want to recognise it. That's why the statue commemorating the incident is tucked in the corner of the university. It can't be put up in the public space like Sanam Luang," said Thongchai as he was pointing to the sombre concrete sculpture near the main gate of Thammasat.

The historian rephrased the point: "They may think that the people who got killed [in 1976] deserved it because they were the enemy of the state. They don't hold grudges over those killed in 1973 and 1992 as they were considered not deserving the deaths and therefore commemorations could be held with official arrangements."

Relatives of the victims of those two incidents were also recognised and their space was not squeezed, said Thongchai.

"That doesn't mean the 73 and 92 relatives and the survivors are not worth being recognised. After all, many of them are still striving for belated remedies even though their loved ones [who died] are called heroes," he said.

For the 2010 crackdown of the red shirts, Thongchai said, it was still fresh but the fate of the incident is similar to that of Oct 6.

"In fact, it's incomparable. In term of the number of deaths, Oct 6 may have fewer casualties, but the brutality and the crime is how people got murdered and how they were treated by history," said Thongchai.

He is less involved in the quest for truths of the 2010 incident at Ratchaprasong, though the US-based academic said: "I do whatever I can -- through academic writings and as a close observer of Thailand."

He actually did more than that. In 2012, Thongchai joined lawyers and relatives of the dead in appealing to the International Criminal Court (ICC) to look into the deaths of 98 people who were protesting against the Abhisit Vejjajiva administration. But the move hit the wall as the ICC had no juristic rule over Thailand.

Back to the issue that is central to his life, Thongchai said -- with tears rolling down his face -- that he would embark on "giving names to the deaths".

"They're not anonymous, they have names and we are to commemorate them as a person," said Thongchai.

It's just a small step of recognition and Thongchai realises he might not be able to see truths being told in his lifetime.

"We could find out and contact several more families of the victims, but they either shun us or take note of it but don't want to get involved in the commemorations. Fear remains with them," said Thongchai.

Each year, only two relatives of the victims -- Auntie Lek, mother of Manu Withayabhorn, and the family of Jarupong Thongsin -- join the Oct 6 commemorations.

"It's bleak. Maybe they want people to forget. But we must not lose hope and sight. Think of it as a historical span. Things have been changing, and the change of the demographics and economy have reshaped the mindset of the people," said Thongchai.

The patriarchal style of rule that permits no arguments in state affairs doesn't work well among the millennial generation, he noted.

"So we just have to pile up the documents and wait for the curious future generation to dig in and ask the questions more and more," he said.

This year, new findings revealed that there were not only two "hanged men" but four -- meaning students who were hanged by the right-wing mob. Chulalongkorn University's political science student Wichitchai Amornkul was one of the men, but even his contemporaries couldn't tell earlier.

"I never look at the photos or films from those days. It's too tormenting, we need a reader -- a watcher -- who is some distance away from the incidents to see details of the brutal scenes," he said.

This was the only legacy that he could leave -- ensuring the deaths wouldn't be forgotten. "And it isn't a vengeful feeling that has driven me through these projects," he stressed.

His next projects are to complete another book, Moments Of Silence: The Unforgetting And Ambivalent Memories Of The 1976 Massacre In Bangkok and perhaps another book, Royal Democracy In Thailand.

"When I criticise any institution, it's not a personal vendetta," he said. "It's something that should be explained."

And after 40 years, the explaining hasn't ended. Or maybe it hasn't even yet begun. 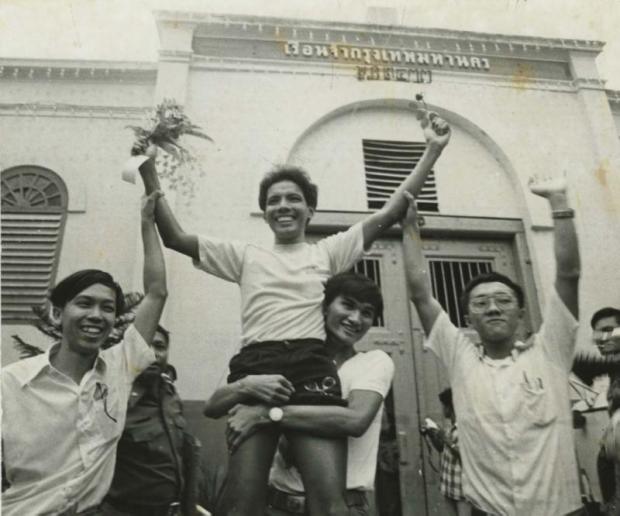 Thongchai Winichakul, right, along with other student protesters on the day they left Bangkok Prison after being granted an amnesty by the then Kriangsak Chomanan government in 1978. Bangkok Post archive