The tributes to King Bhumibol Adulyadej continue to flow unceasingly around the country, and none show a higher reverence for the late monarch than the unique events launched by ethnic highlanders from the far North who have held a rare ritual.

All roads lead to the Dusit Maha Prasat Throne Hall in the Grand Palace where the late King is lying in state. Every day, the majestic throne hall is thronged by mourners from all walks of life who queue for hours to get a brief opportunity to pay their respects to the Father of the Nation.

However, some 700 kilometres away in the remote pocket of tambon Rom Yen of Chiang Kham district in the northern province of Phayao, a mourning ceremony has been organised for the king who selflessly gave new life to many ethnic Yao or Iu Mien hilltribe members. 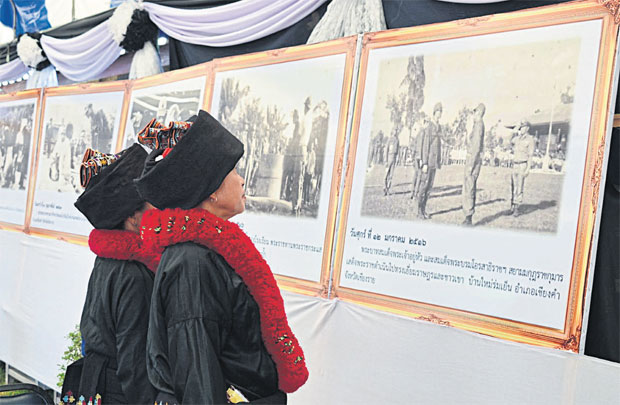 Women in traditional hilltribe costume look at pictures taken of the late King during his visit to their village in the past.

In reciprocation for the late King's devotion to his people, the hilltribe villagers last month hosted the ancestral "Chow Zin" merit-making ceremony, reserved for the most important of events, to pay homage to the late King. The solemn event was to help King Bhumibol's spirit ascend to heaven. 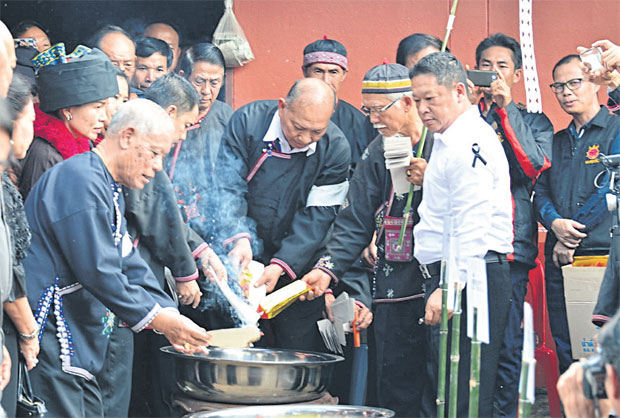 Iu Mien ethnic residents take turns burning gold and silver joss papers to send the late King on his heavenly ascent. The event was preceded by a set of oblations being presented to pictures of King Bhumibol and the deities early in the morning, followed by another set a few hours later. 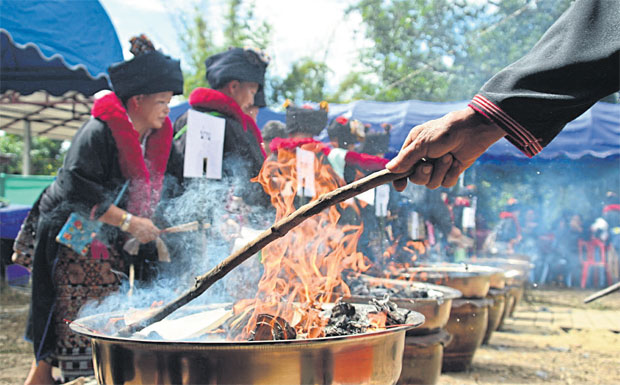 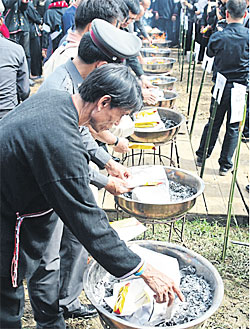 The building was quickly filled with up to 500 Yao mourners from seven northern provinces bound by the deep gratitude they feel towards their beloved late King to whom they owe life-changing royal projects that have put food on their tables and provided steady jobs for decades.

Mr Khewaen explained the ceremony was to be held over two days. On the first day, the organisers and participants are busy with pre-ritual routines and curtain-raising tasks during which the Yao residents gather to organise paraphernalia essential for the ceremony, including oblations which are to be offered to the spirit of King Bhumibol and their traditional 18 deities.

The late King's oblations consist of divine rice, fruit and water while offerings for the deities include rice whisky, salt, vegetarian food as well as gold and silver joss papers.

Mr Khewaen said the procedures of the Chow Zin ceremony cover several detailed sub-rituals before the core ceremony is performed the following day.

The actual ceremony starts hours before the break of dawn on the second day. The rite known as Sueng Mien is launched at 3.30am when the 18 deities are summoned to acknowledge the start of the Chow Zin ceremony and the monarch's spirit is guided to heaven. 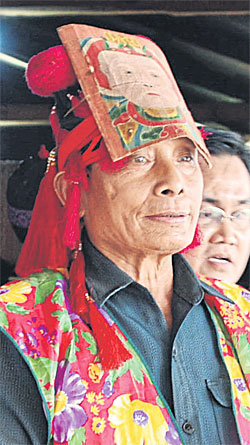 Suthep Sapthanakhom, a 71-year-old shaman, in full costume prepares for the ritual.

After that, photos of the late monarch and the traditional deities are placed in a central ceremony room as the oblations are laid out and offered by the head of the ceremony.

A set of oblations is then presented to the pictures of King Bhumibol and the deities at 7am, followed by another set to be put out at 9.30am. Gold and silver joss papers are then burned to send him on his heavenly ascent.

Other Yao villagers will attend the ceremony in the afternoon. After the ceremony, the Yao people then sit down to a mass vegetarian feast, culminating in the great merit-making gesture for King Bhumibol and themselves.

According to Mr Khewaen, a person who plays a pivotal role in the Chow Zin ceremony is a shaman called Phee Yai (big ghost). In the ceremony room and before the photos of King Bhumibol and the gods, the shaman and his disciple take turns delivering an ancient prayer, dating back about 3,200 years.

Suthep Sapthanakhom, the 71-year-old shaman, said his duty was to invite the 18 deities to lead the late King's spirit to heaven. The prayers must carry on uninterrupted for two days.

Somjet Sae-Chao, the village chief of Ban Pha Daeng Bon in tambon Rom Yen, said the Yao residents were given the opportunity to offer divine rice to the spirit of the late King during the ceremony and to save some to be taken home for family consumption as they believed this will bring them good luck.

"Rice is regarded as food the late King gave us. Therefore, we requite his kindness by offering him the divine rice. We then eat the rest to symbolise good luck," Somchai Chaopawilai, a 62-year-old Mien resident of Pong district in Phayao, said.

Held in parallel to the ceremony at the centre building is an exhibition of the late King's visits to the mountain communities in the North. 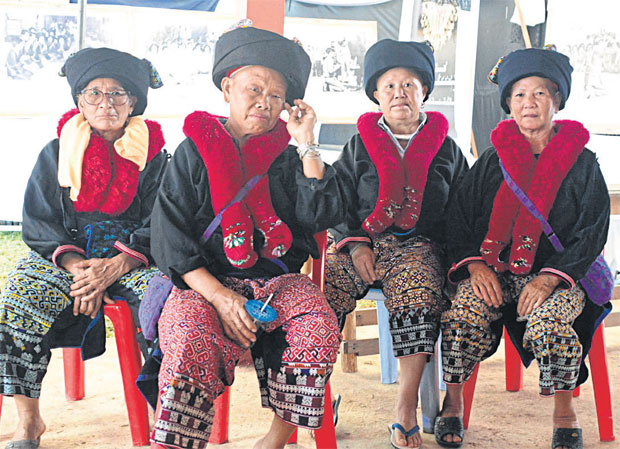 Iu Mien hilltribe women sit around for a chat before they take part in the ceremony, dedicated to the late King’s immense contributions to the residents’ well-being.

Mr Khewaen said the ethnic Yao people decided to host the Chow Zin ceremony after a period of grieving for the late King.

Aside from the ceremony, Mr Khewaen said the Yao highlanders pledged to follow in the late King's footsteps by upholding their virtues and performing good deeds for society.

Aong-nai Triempana, a member of the Thai Iu Mien Development Foundation committee, said had it not been for King Bhumibol, the lives of the Yao ethnic minority would never have improved so much and they would not have found contentment from living with sufficiency, a significant life concept initiated by the late King. During the ceremony, many of the villagers were moved to tears.

Among them was Liewkui Sae-Jao, 63, who said: "I never had an audience with King Bhumibol, but I couldn't fight back the tears when I heard he had passed away. I cry every time I see his photo and I still do. I really love him."

Many youngsters followed their relatives to the ceremony.

Phattsakorn Krittanawathin, a six-year-old Yao boy, accompanied his grandfather and grandmother to the ceremony. He said he wanted to make merit for the late King.

"I will study hard and do good as a way to remember King Bhumibol," the boy added.

Nanthicha Leeprasertsoonthorn, an ethnic Yao student, said it was a privilege to be part of the ceremony through which Yao residents could express and immortalise their love and reverence for the late King.

The ceremony is a spiritual magnet that binds different Yao tribes together. It encourages them to help conserve and pass on ceremonial traditions to the next generation, Ms Nanthicha said.