Thon Buri turns 250 this year. For the occasion, authorities have planned a series of year-long celebrations to remember the past -- and present -- glory of the former capital of the Kingdom, whose significance to the history of Siam was momentous. Today Thon Buri is sometimes perceived as "the other side" of Bangkok, a sleepy, less glamorous district. But in truth, the area on the right bank of the river is a trove of historical riches, while its economic and cultural importance is integral to the development of the country.

Thon Buri was an ancient town that existed long before King Narai the Great (1656 to 1688) made it a fort town in the Ayutthaya period. After the fall of Ayutthaya Kingdom to the Burmese in 1767, King Taksin the Great sailed down the Chao Phraya and made Thon Buri his capital and ruled for 15 years. King Taksin is remembered and revered as the warrior king who restored independence to the Siamese.

"The year 2017 is an auspicious occasion to commemorate the 250th anniversary of Thon Buri. There will be academic seminars and other activities for raising the Thai people's awareness of King Taksin's importance and the establishment of Thon Buri as a capital," Fine Arts Department director-general Anandha Chuchoti remarked.

The government puts emphasis on the subject in schools to ensure that Thais understand the background and contribution of Thon Buri to the growth of the country, he added.

Deputy director-general Khajorn Mukmikha said the celebration, which will take place throughout the year at various locations, is an occasion for the government and citizens to express their gratitude toward King Taksin and other ancestors for bringing stability and strength to the country.

Details of the events in Bangkok and other provinces related to the founding of Thon Buri will soon follow. One of the highlights will be an Ayutthaya fair called "250 Years of Ayutthaya And Thon Buri In Memory".

Damrong Phuttan, a former Ayutthaya senator who sits on the organising committee, said the event will showcase the fields of art, technology and other traditions of Ayutthaya that passed on to Thon Buri and Bangkok. Also, there will be trips to palaces, temples and canals. The aim, he said, "is to promote the restoration of Ayutthaya and Thon Buri, and encourage Thais to learn lessons from the fall of Ayutthaya and look at neighbouring countries without bias".

Thon Buri was named after a city called Krung Thon Buri Sri Mahasamut, mentioned in the religious book Samut Phap Traiphum. It lasted from 1767 until 1782, with stable economic, political and foreign affairs.

Back in 1767 when King Taksin, then Phraya Kamphaengphet -- who also commanded a naval fleet -- realised Ayutthaya would soon fall to the Burmese, he decided not to return to Ayutthaya, instead gathering about 500 Siamese and Chinese men in an attempt to regain the city.

They fought and pooled more forces along the way. King Taksin had around 1,000 soldiers when reaching the coastal town of Chanthaburi and returned to retake Ayutthaya with some 5,000 soldiers and 100 warships, according to the Krung Thon Buri Royal Chronicle penned by Phanchanthanumas (Jerm). 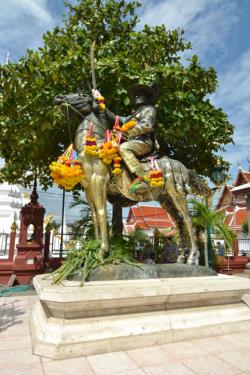 "In the 11th lunar month of the Year of the Pig [1767], the king led his 100-vessel naval fleet and 5,000 soldiers to depart from Chanthaburi," reads the royal chronicle.

They encountered and defeated many small rebel groups along the way, such as in Chon Buri. His troops later passed Pak Nam, retook Thon Buri and executed Thong In, a Siamese traitor who had been appointed by the Burmese to govern Thon Buri. However, some of Thong In's aides managed to escape to Pho Sam Ton Camp to alert Burmese army leader Suki Phranai Kong. A Burmese naval fleet was dispatched to stop the king and his army at Tambon Phaniad. However, those Burmese soldiers fled because they were scared by the king's reputation for victory.

"On the 12th day of the 11th lunar month," according to the royal chronicle, "the king led his troops to storm the east side of Pho Sam Ton Camp, forcing the Burmese soldiers outside to escape to the camp. He then ordered his troops to build ladders and prepare to storm the camp. However, the Burmese surrendered. He then arranged a royal cremation for the late King Suriyart Amarin at Pho Sam Ton."

While most people highlight King Taksin's heroic deeds in battle, respected historian Sunait Chutintaranond shed some light on King Taksin's achievements in national reform, a much-discussed subject during a recent seminar on the 250th anniversary of Thon Buri.

"The fall of Ayutthaya in 1767 actually did not mean the loss of independence. The Burmese intended to erase Ayutthaya from history by taking people as war prisoners and destroying the city without sending anyone to govern Ayutthaya. There were neither houses nor capitals left. King Taksin spent much time building the new capital as a centre of power. It was an uphill task amid many dead people and starving people," Sanait noted.

According to this Thai-Burmese history expert, King Taksin faced several problems: food shortage, rebellions, threats from the outside, and how to win acceptance as the king of kings from rulers of towns that had been under Ayutthaya's control.

To achieve his goal, he had to prioritise the urgency of these issues. He had to retain Ayutthaya while combating rebel groups. Some of the rebels, such as the ruler of Phimai town, fled and sought help from the Khmer, prompting the king to march and fight them. It took three years (1767-1769) for him to fight four major rebel factions: Chao Phraya Phitsanulok, Chao Phimai, Nakhon Si Thammarat and Chao Phra Fang. From 1769 to 1776, the king managed to forge alliances with Chiang Mai, Lanxang, Khmer, Nakhon Si Thammarat and Pattani. Later, the Burmese sent an army led by the ruler of Dawei to attack Thon Buri in a battle called the Bang Kung War. Two battles -- the Bang Kaew War and the Athiwongyi War (called Asaewoonki by Thais) -- against the Burmese invaders occurred in 1774 and 1775 respectively.

The other problems to tackle were food shortages and price surges. After the fall of Ayutthaya, people fled the fighting and left their farms for at least two consecutive years, leading to lack of food and starvation.

Over time, many more escapees returned and settled in Thon Buri, causing a sharp population growth. According to the royal chronicle, traders flocked to sell rice to villagers at steep prices -- 3-6 baht per thang (15kg). Therefore, King Taksin brought food supplies from Chanthaburi, Rayong and other eastern towns, and Pho Sam Ton Camp, and sold hidden treasures to buy huge amounts of rice for resale to villagers at low prices, forcing the speculating merchants to decrease the prices of their rice. The market mechanism then started to return to normal.

Peace returned to Thon Buri after King Bodawpaya of Burma died suddenly, prompting the Burmese invaders, led by army commander Athiwongyi, to retreat to Ava, while Thon Buri won the war against Vientiane. According to a book of King Taksin's commands, the king ordered his son, Prince Kromkhun Indarapitak, to bring the Emerald Buddha from Tha Chao Sanut, Saraburi, to Thon Buri in jor sor 1141 (1779 AD). The arrival of this Buddha statue in Thon Buri in the fourth lunar month that year was celebrated for two months and 12 days. After that, Thon Buri acquired stability and glory until the end in 1782.

With all the above significance, Thon Buri has long been a major community that deserves more recognition and better studies. For instance, the Fine Arts Department has been conserving the old walls and moat of Thon Buri, and plans to make public its findings in May. It has published royal chronicles about Thon Buri Kingdom and is printing a book of memos, written by a German about Thon Buri during the reign of King Taksin. In all, much more of Thon Buri waits for those interested to explore.

More updates on the celebration of Thon Buri's 250th anniversary will follow. 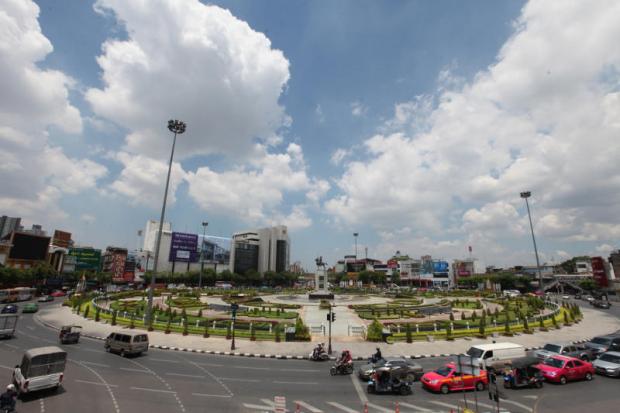