published : 7 Jan 2017 at 04:00
newspaper section: Muse
writer: Apipar Norapoompipat
AUREOLIN floral designs at The House Sathorn, Bangkok. 'With the clients' preference that the ceremony have a lush and refreshing feeling, PHKA's floral designers selected lotus leaves, uncommon for use in such an event, and cobalt yellow Oncidium. The drizzle is arranged on an ordinary but detailed structure. 'We used the Thai floral craft technique of stringing, which also preserves fresh flowers, but somehow adapted the Western style by assembling it into a chandelier-like structure. 'Within the vivid architectural elements of the House on Sathorn, most flowers have been selected in order to have a harmonious tone with the context.' — PHKA Floral Design Studio Thanat Laoharawee

Flowers, for the longest time, have been an integral part of Thai society, found ubiquitously in day-to-day life and interlinked with every important religious and cultural ceremony. And now with wedding season in full bloom, we're seeing more flowers than ever -- from the pre-wedding khan mak parade, to the extravagant floral backdrops, to the fought-after bridal bouquet.

Thanks to this generation's obsession with social media, flowers are being used in more creative and extravagant ways than ever, and one design studio has been gaining attention for creating and designing floral art like nobody else.

Founded in 2013 by architects Vissata "Poy" Duangwongsri and Tul Chompaisal, PHKA Floral Design Studio, though never planning to cater to events, has caught the attention of many newlyweds and event planners due to their simple, clean and delicate designs, stemming from their multidisciplinary practice and background. 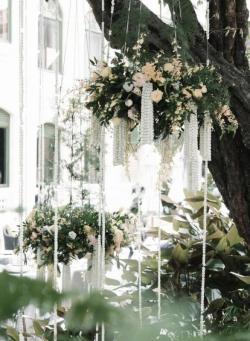 "Poy has always been interested in flowers," said Tul, "and we wanted to build onto the flower business in a modern way that no one has done before. Our process of thinking is very much design-and-architecture-based."

Normally, flowers are arranged so they can be placed somewhere in a room for decoration, and at the same time, space makers or interior designers will create rooms without thinking of the details that go inside. What Poy and Tul do is design both the space and the floral decoration at the same time -- supporting each other and coming out with perfectly balanced installations and centrepieces.

"Some people have misunderstood and asked if we're wedding planners," chuckled Poy. "So when they ask, we tell them we do structures plus flowers."

They've created jaw-dropping sets like mystical tunnels and whimsical backdrops, arranging and juxtaposing flowers with other materials in unusual positions to play with people's perceptions and give a sense of overall meaning to the event -- rather than just having the flowers become an empty decoration.

PHKA goes hard on ideas and concepts, unlike the average event organisers, who tend to create easy-to-understand visuals for guests and clients. "For example, if clients set a theme of the ocean, event organisers may simply go full-on Hawaiian," said Tul. "But for PHKA, we'll try to deconstruct it. What can an ocean be? And once we're able to find something deeper, we'll come back to the theme. We don't want people to look and understand right away, we want it to be deeper than that."

Their decoration for a Little Prince-themed wedding, for example, featured no characters from the book itself, but played on the idea of perception stemming from the hat (or the boa eating an elephant) that the Little Prince drew. They created a walkway, starting with flowers growing out of the wall on the left, while a mural of a sky was painted on the wall on the right. Walking into the tunnel, the flowers slowly shift onto the ceiling while the sky moves towards the ground.

"From the past until the present, flowers in different cultures convey different things," explained Poy. "It's very individual to society. But in terms of wedding events, it's the client who dictates what they want the flowers to convey. It's our job to help them realise that in physical form. It's quite similar to dressing up -- but not exactly, since we work on space and not only decorative ornaments. You can say that it's not necessary, but people use them as a tool [to convey something]." 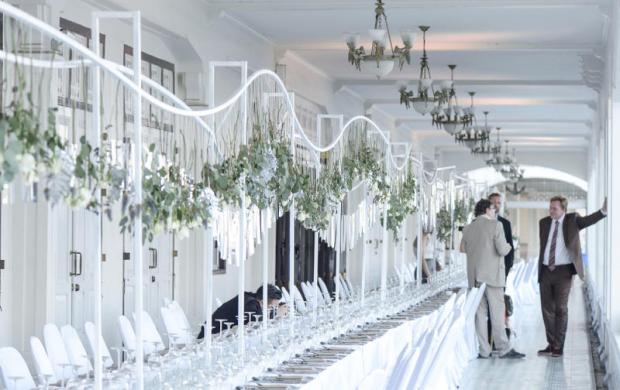 The CONFLUENCE floral design at the Royal Naval Institute. 'With [the couple's] love for the water, they chose to have a wedding ceremony and reception at Royal Thai Naval Institute, a stunning ancient building on the riverbank. 'With a unique colonnade space, PHKA chose to set the planning of all tables as a single, long continuous table, with few scattered sets on the outdoor lawn. Only one centrepiece will be designed to dominate the space and weave with the architectural decorative elements. 'Then, a concept of 'The Confluence' was proposed to represent the couple as two rivers, which meet and join as one, K'Toeyngam (Bangkok-Chaophraya) and K'William (London-Thames). Two curvilinear and twisted lines of plants (such as white rose, Eucalyptus, silver-dipped Lady Fern, Blue Thistle, Blue Privet Berry) and mirrors are installed under the white metal structure above the table in order to meet the criteria set before.' — PHKA Floral Design Studio Adisorn Photography

Tul is in charge of designing the general interiors, while Poy, who is in charge of the floral art and decor, has her own system to come up with designs in order to evoke a certain mood or meaning. She doesn't just create a bouquet by picking the most expensive or prettiest flowers she can get a hold of.

"When I studied [for my master's in entrepreneurship] in London, I had an internship at a flower shop," she recalled. "I was lucky to have a boss who taught me the techniques of designing a bouquet. With arranging flowers, you can't just look at the colours and form. You have to look at the adjectives as well. When he trained me, he said someone is buying flowers for a baby shower -- he wanted me to think of an adjective for baby showers. I thought of the word 'innocence', so he told me to go around the shop and pick the flower that looks the most innocent. I chose a delicate white flower, and I went around the shop looking for other flowers that go with it -- so there will be no other adjectives. Everything has to link to the word, and with us, we have to transform that word into a space as well." 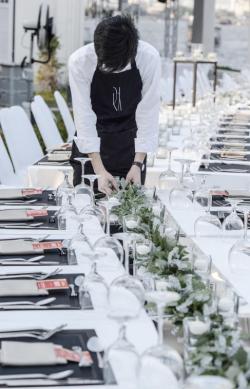 One client told PHKA that they wanted their wedding to be whimsical -- and evoke the feeling of taking a stroll in an enchanted forest.

"So we had to choose flowers that will go with that word," said Poy, picking purple Caspias, Alliums, Delphiniums and Calla Lillies for the project. "With the word 'whimsical', we also wanted to change people's perceptions. The backdrop had flowers sticking out of it quite unnaturally instead of growing vertically off the ground, and the backdrop itself also looks like it's about to fall down."

With a more Western and conceptual approach to floral design, PHKA has applied their modern thinking to Thai floral crafts as well in their hopes to evolve the ancient Thai craft.

"We try to bring in and play with cultural dimensions in floral craft," said Tul. "Thai flowers, in terms of floral craftsmanship, have been shelved -- that it should be like this or like that. For us, we think that we can sometimes play with it and incorporate other designs. We change the form and deconstruct it. We feel like culture shouldn't be unmoving. We want to design it in a more modern way, so culture can continuously be developing." Working with flowers of course has its challenges. Each type of flower has different conditions it can survive in, with some not even able to last without water for 10 full minutes. Certain flowers come out in certain seasons, prompting Tul and Poy to research beforehand whether certain types are available for which month. The aromas also have to be taken into account, with some species not suitable for the dining table due to their strong scent.

"For me, what's most stressful is time," said Poy. "We are working with something fresh, and we don't have a lot of time to set it up. And sometimes clients don't know what they like and don't like, and we have to dig deep in order to find out."

However, amid the challenges, the duo still enjoys creating, designing and problem-solving. "What I like is that every project has something to solve," continued Poy. "How deep and how conceptual each event is varies. One couple placed a lot of importance on the concept, and beauty came second. Even if they're the only two people who understood their own concept, they were happy. When we meet clients like this, we're happy because they keep pushing us to keep creative." 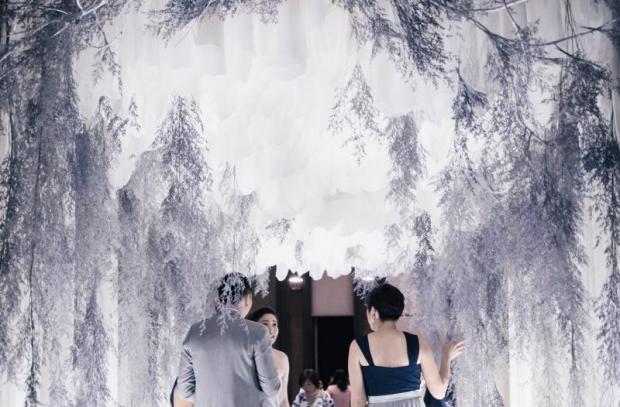 THE WHIMSICAL FANCY floral designs at the Okura Prestige, Bangkok. 'Uncommon shades of colour, including violet, magenta, fuscia and turquoise were initially selected by the clients themselves. 'The narrow tunnel space that connected pre-function and function areas is entirely covered with loose fabric layers, interleaving with upside-down Caspia in light purple, intended to give a mystical look. 'The sharply bent stage backdrop is the reception's final part, with a lower section spread with flowers. Allium, Delphinium, Calla Lily are highlights among selected flowers that have been used in a collapsing-like arrangement.' — PHKA Floral Design Studio Minami Yuzawa

Weddings though, are not all that they want to do. "In other countries, like France, they incorporate flowers into design like fashion shows, which we find very interesting. The more we work on different projects, assignments and customers, PHKA will have a wider range, and we're trying to work in other aspects." 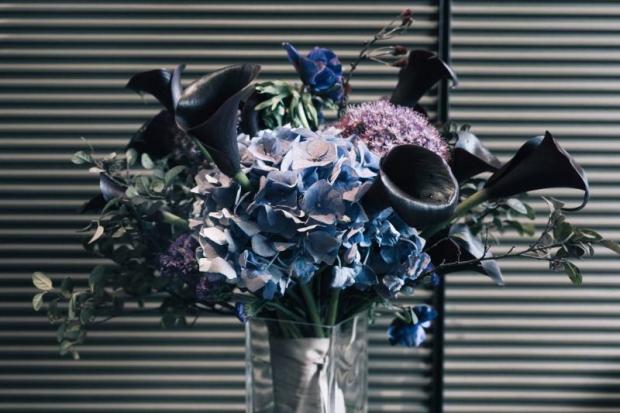 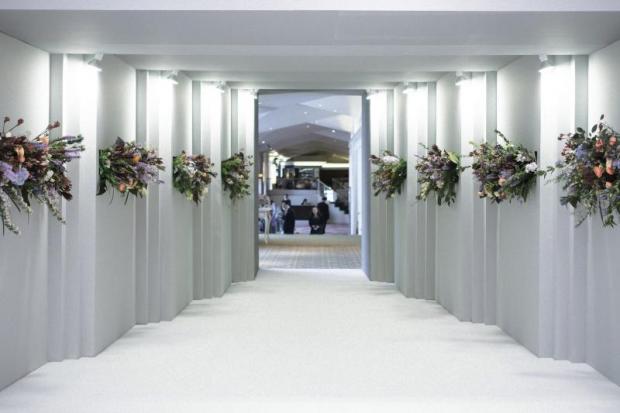 EPHEMERALITY / ETERNITY floral design at Dusit Thani, Bangkok. 'With chaotic interior and vast space to set up the event, an analysis of site has been taken, in order to find a new single perception and spatial relationship. 'PHKA and our clients are influenced by an architectural leitmotif of late-Carlo Scarpa, in which the layout of space is connected, relationship between artificial-natural is made and sensory properties are created.' — PHKA Floral Design Studio Pavitra Phornthanavarsit 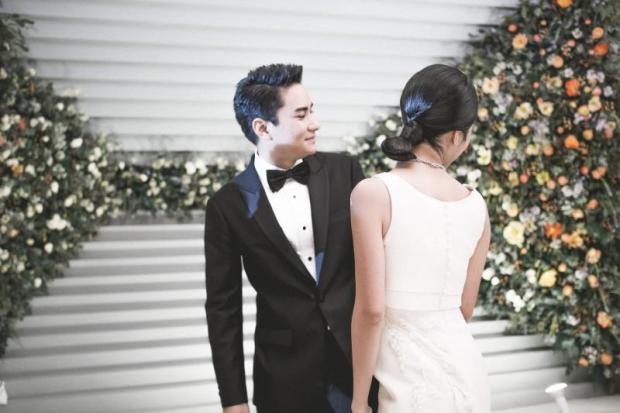 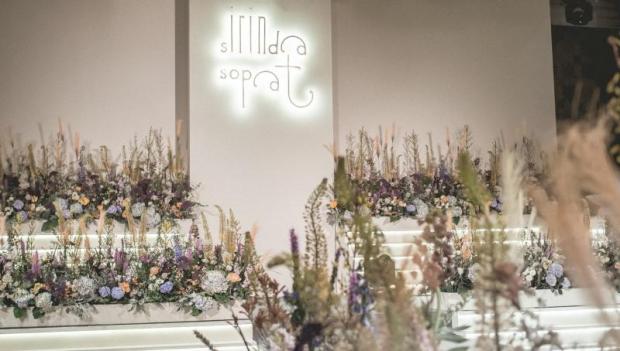