Academic Tongthong Chandransu lists nine important facts about royal funeral rites and the royal crematorium, expected to be finished for King Bhumibol Adulyadej by the end of the year

Tongthong Chandransu is the name that comes to the mind of most people when they think about royal ceremonies. His narration of these events, a familiar element during their broadcast, is always filled with insightful facts and wondrous anecdotes about Thai history and centuries-old culture.

The 100-day funeral rites for the late King Bhumibol Adulyadej on Jan 20 marked the end of the royal-sponsored funeral ceremonies, with no more major events until the royal crematorium is finished, which is expected to be towards the end of the year.

Here, the former Prime Minister's Office permanent secretary and former dean of Chulalongkorn University's Faculty of Law shared what he believes the public might want to know about the royal funeral rites and cremation.

1. The Thai institute of monarchy is influenced by beliefs from both Buddhism and Brahmanism.

According to Buddhist doctrine, the king is a Bodhisattva who will reincarnate as the future Buddha. Under this belief, to be king is to do good deeds to build up the charisma and get closer to being reborn as Buddha.

As for the Brahman side, the king is believed to be an avatar of the three mighty gods, Brahma, Shiva and Narayana.

"It's not clear which individual god the Thai kingship is based on although it is apparently leaning more towards Narayana," Tongthong said.

He cited as an example the word "Ramathibodi", found in the name of all the kings. The word is derived from King Rama of the epic Ramayana, who is an avatar of Narayana.

However, an association between the monarchy and the god Brahma is also evident, according to Tongthong. For example, the main royal barge, the golden Suphannahongsa, represents the mythical hamsa swan which is Lord Brahma's vehicle.

According to Tongthong, royal seals carry symbols from all three gods. There is one that shows the Hamsa supporting a heavenly abode, another the more familiar garuda, Narayana's vehicle, spreading his wings and another bearing the motif of Mahaounalom, regarded as Lord Shiva's third eye.

The royal funeral rites and cremation follows the two main religious beliefs. While the use of the vertical royal urn may be linked to the Brahman creed, most other aspects of the ceremony are rooted in Buddhist principles, including all merit-making ceremonies and an idea that the royal body need not be kept forever. That is why there is the royal cremation.

2. Why will the royal cremation be conducted at Sanam Luang? 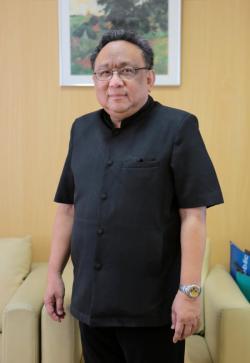 A law lecturer by training, retired Permanent Secretary for the Prime Minister's Office Tongthong Chandransu has made a name for himself as the go-to narrator of royal ceremonies thanks to his vast knowledge of Thai history and age-old customs. Photo: Chanat Katanyu

In the past, tradition had it that no cremation could be made inside the capital's walls. During the early Rattanakosin era, dead bodies must be transported for cremation outside the wall through the gate near Wat Saket. That is why the opening is called the Ghost Gate until these days.

He added that because of the tradition, temples located inside the capital's walls such as Wat Pho, Wat Mahathat or Wat Chana Songkhram do not have a crematorium.

An exception to the rule, however, was made only for high-ranking royalty. According to Tongthong, the cremation for royalty from the rank of Chao Fah up must be conducted in a crematorium located "in the middle of the capital".

He said since it took a long time before a royal crematorium could be built, it was not unusual for lower-ranking royalties or senior bureaucrats to be cremated in the same crematorium.

3. What is the idea behind the crematorium's design?

For Tongthong, to build the royal crematorium is to reproduce a vision of heaven where it is believed the divine spirit of the late king will ascend to.

The royal crematorium is to signify Mount Sumeru, regarded as the centre of the universe according to traditional beliefs. The structure will be surrounded by lesser buildings representing heavenly pools and other features that accompanied the blissful place as described in religious lore.

Accessories and decorations of the royal crematorium are made to reinforce the heavenly theme.

During the early Rattanakosin era, a royal crematorium could be massive in size.

"It was so huge King Rama V once said people who had never seen it would not be able to envision how large it was," Tongthong said.

Tongthong said it took a lot of effort and resources to find tall enough timber and transport them from the North, to build a royal crematorium in the past. Eventually, King Rama V came to the conclusion that such an extravagant building might not be necessary, Tongthong said.

Since the king did not want to be seen as compromising on the honour of other royalty by reducing the scale of the royal crematorium, he commanded that the new tradition of having a smaller royal crematorium should begin with the one to be built for his own funeral.

4. The making of a royal crematorium is regarded as a culmination of all branches of Thai traditional arts and craftsmanship.

The event is a showcase of Thai architecture, painting, embroidery and flower arranging; all must be prepared to the best standards.

Following the Buddhist belief in impermanence, the Thai royal crematorium is made of materials that may be dismantled once the ceremony is complete. Usually, elements that adorn the royal crematorium were donated to temples, palaces or kept in museums.

One outstanding case is the royal crematorium for Prince Siriraj, son of King Rama V. At 18-months-old, the young prince died of dysentery in 1887. Following his cremation, the woods that were used to construct his crematorium were reused to build Siriraj Hospital, which opened a year later.

5. By tradition, the king's body lies in state at the Dusit Maha Prasart Throne Hall.

The royal ceremony expert believes it's because the building has an elegant setting. It is also of suitable size -- not too large as to make people feel lost or so small as to provoke a cramped atmosphere.

It's also appropriate in terms of functionality. The adjacent Pimanrattaya Throne Hall usually serves as the venue for the funeral bathing ceremony.

6. Before the reign of King Rama V, the general public did not have any chance to participate in the royal funeral ceremony.

When the king passed away, all that ordinary people would see was a public announcement about the death. After that, they would go into mourning, including having their heads shaved. The next thing they would know was when a construction of the royal crematorium was finished and a grand merit-making ceremony was held, according to Tongthong.

The tradition changed after the death of King Rama V, who reigned for decades and was beloved by his people. Considering his popularity, Prince Damrong at that time proposed that the palace allowed the public to pay respect to the king's body.

Still, the public attendance was given for only two days in a month, on the 1st and 15th.

Tongthong recalled that the allowance was increased during the funeral rites of King Rama VIII to three days a week on Tuesday, Thursday and Sunday.

"I remember this fact because there is a related story about when the late King Bhumibol wanted to pay respect to his elder brother before he departed for studies overseas. The day was Sunday and his staff asked King Rama IX whether he wanted the public attendance to be cancelled. The late king replied saying since Sunday was the designated day for the public, how could he cancel it?" Tongthong said.

7. It might come as a surprise to some people that the periodic Buddhist ceremony to mark the 5th, 10th, 15th or 100th day of the king's passing is adapted from Chinese tradition.

According to Tongthong, the royal funeral ceremony ended after the 100-day memorial. After this, members of the public can request to play host to the daily funeral chanting but there won't be any more major ceremonies until construction of the royal crematorium is finished.

8. The royal crematorium for the king can only be designed in the shape of a busabok, featuring a tall structure with multi-tiered pointed roof.

On the third day, His Majesty the King will lead the ceremony to collect the royal ashes, which will lie in state at Dusit Maha Prasart Throne Hall.

9. The issue of the royal ashes.

According to Tongthong, tradition has it that royal ashes of the past kings are enshrined underneath the main Buddha image of the temple associated with the king's reign. According to Manager Online, these temples are:

King Rama II: Wat Arun or the Temple of Dawn

It's not known yet where the royal ashezs of King Bhumibol Adulyadej will be enshrined. 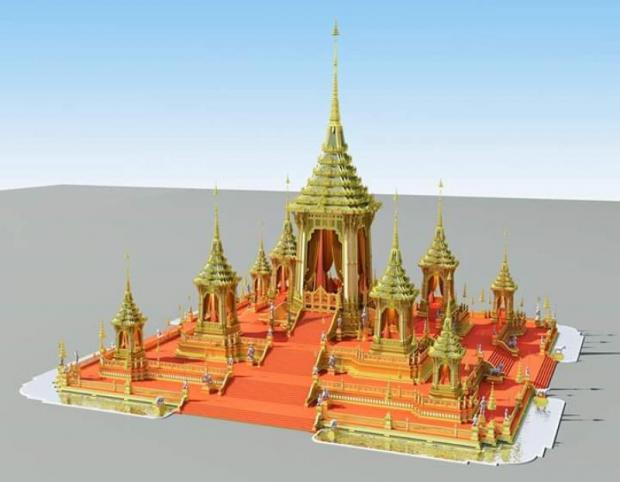 A graphic impression of the royal crematorium for King Bhumibol Adulyadej being built on the grounds of Sanam Luang. Fine Arts Dept's Office of Traditional Arts FB 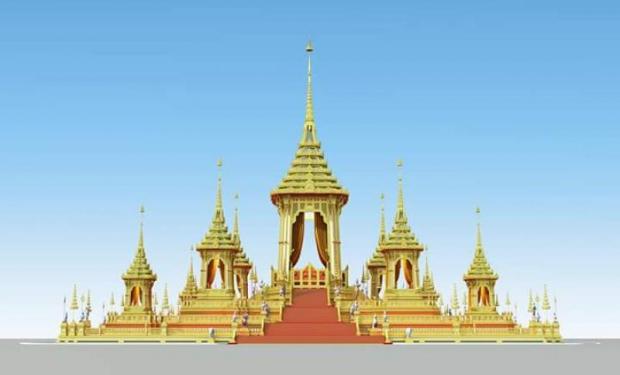 Dance in times of pandemic

In the land of the blind