For years, transgender university students in Thailand have been fighting for the right to wear the uniform of their chosen gender. From attending classes to internships and exams, up until the day they finally graduate, uniforms can be either a source of pride or of pain.

Things were no different for gender activist Nada Chaiyajit, who is graduating with a law degree -- her first undergraduate diploma, coming at the age of 37. She wants to appear on pictures as she is -- a woman -- on her transcript and other academic documents, despite her ID card and title identifying her as male. It is not something the University of Phayao, her alma mater, normally allows. And without giving the university photos corresponding to its policy, her documents cannot be released.

The issue of uniforms for transgender students became big in 2012, when Thammasat University allowed a student named Baramee "Denjan" Phanich to wear a female uniform for graduation, presided over by Thai royalty. She was the first trans student in Thailand allowed to do so, and the symbolic gravity of the event was huge.

Following her case, transgender students from other institutions followed suit. However, it should be noted that they usually approached their cases by seeking psychologists to certify that they suffer from gender-identity disorder or gender dysphoria, making their appeal on grounds of pathology.

Nada, however, disagrees with this approach. While she respects those who have come before for paving the way, she feels gender identity is within one's own self-determination, not a sickness. The activist decided to make an appeal to the university on the grounds that it is within her rights of free expression.

In deciding to pursue the photo issue, Nada watched deadlines for her postgraduate scholarship applications and bar exam fly by. The activist even contemplated giving up just so she can move on with her life, until someone asked her how she could fight for gender equality yet give up on her own case.

Nada eventually lodged her appeal. The university's policy wasn't up-to-date current society, she said, citing the 2015 Gender Equality Act, which states that no one should be discriminated based on gender.

After months of waiting, in stress and tears, Nada walked into the university office and came out with the long-awaited documents, her hands shaking. A photo is a representation of a person's identity, she said. These documents will stay with her for life, and she finally made it right by her conscience as well as human rights.

"I've been flying up and down, from Bangkok to Chiang Rai and Phayao every week for the past three years for this degree, and it belongs to Nada Chaiyajit -- a transgender intersex woman -- not a man, not Mister Nada."

Following the success of her own case, Nada said she plans to continue advocating for the university to lift its standard to protect student diversity. Currently, the University of Phayao -- like other universities -- allows transgender students to wear their chosen uniform on a case-by-case basis only. Mahidol University, according to the activist, is another institution that has waived the photo rule. And she hopes she can push this to become the new standard for Thai schools.

"I didn't do what I did for myself alone. I'm among those who are being mistreated in this unfair structure, and I know I have the power to change it."

Within the Thai educational institutions, the problems that LGBTI (lesbian, gay, bisexual, transgender and intersex) students face go beyond the matter of uniform. The activist recounted that university life wasn't at all pretty when, over 15 years ago, she first attempted a bachelor's degree at a Bangkok university. Back then, the only places that accepted transgender women were cabarets. Nada, outspoken about her gender identity now, didn't reveal her status before, to avoid gossip and bullying.

Still, people speculated. Nada overheard her fellow taekwondo club members planning to undress her to see her body, along with strings of insults against her sexuality. Other trans had it even worse, especially those who'd come out. She has witnessed a katoey getting harassed during hazing, with people laughing at the sight.

"It was a very dangerous space for transgender persons. That was enough to make me quit my education after two years in," she said.

Without a degree, it was difficult for Nada to find a full-time job. And even when she was qualified for a position, employers turned her down. She couldn't get a woman-specific job because her title is mister. And she couldn't get a job designated for men because she doesn't look like one. At the time, she belonged to an online transgender network while also volunteering for the Rainbow Sky Association of Thailand (RSAT), a prominent Thai NGO advocating for gender equality. She later began working for the organisation.

Nada has been an activist since 2004. And in her years of observing and advocating on behalf of the gender-equality movement, she was pleased to note the country's steady progress.

At least, the people's viewpoint towards LGBTI has been improving, and many now understand the concept of freedom of expression and human rights.

Still, what is urgently needed is promotion of the law, said Nada. All institutions have students who are transgender and homosexual, and they should realise what sort of rights they're entitled to. They should be made aware that discriminatory actions are against the law, and that they need to make their voices heard in order to create change.

The activist suggested that transgender students looking to make an appeal to their universities can seek help and advice from local LGBTI organisations including RSAT, the Thai Transgender Alliance, Transpirational Power and more.

In the end, Nada hopes to see the executives of each university band together nationally to change the policy. There would be no need for students to make countless individual appeals to their institutions, and staff members wouldn't need to go through a lengthy process just to grant approval. Make it a standard, she said, saving everybody time and paperwork.

Nada Chaiyajit was born intersex — the often omitted "I" in the LGBTI acronym. Intersex is a condition in which a person possesses variations of sex characteristics that do not fit the typical male or female definitions. It may include genital ambiguity, right down to a different combination of chromosomal genotype aside from XX and XY. It's a reflection of the biodiversity in nature, she said.

LIFE AS AN INTERSEX TRANSWOMAN

Nada was assigned as male at birth, though she grew up to realise she doesn't identify as one. Her childhood was traumatised by mockery, sexual violation and harassment — a living nightmare that affected a large part of her life. To this day, it pains her to talk about the horrendous memories.

Working as an activist now and helping others with similar experiences has become quite a healing process, said Nada.

"It eased off the nightmare," she said. "Many activists are sacrificing their lives in this line of work because they were once victims."

As she grew older, she was subjected to hate speech and prying questions from those who find it impossible to grasp the concept of intersexuality.

"Our society doesn't get intersexuality at all. They look at my face but they don't see it. They see this," she said, gesturing at her own crotch.

Nada's own parents also found it difficult to accept her transition from a man to a woman. She was kicked out of home. For seven years, she didn't get to see her own father, though she secretly met her mother occasionally. She has slept on the streets, begged for food from neighbours, and even attempted to commit suicide four times, feeling that she had nowhere to go.

Fortunately, her family has reconciled and Nada is back living with her parents. It took some long conversations before both sides came to a mutual understanding.

"You could face a thousand discriminations, but, however you are being mistreated and violated, home should be a safe place, not the most dangerous one, not the place where your wounds get reopened and torture repeated. The world may call you names, but when there is still a mother's embrace and a father's understanding waiting at home, then you're ready to fight again." 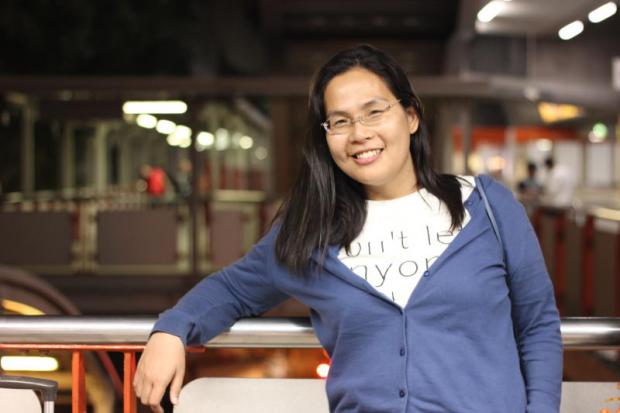