Cornering the market in Thainess

Actor Vithaya Pansringarm's unlikely career has seen him work with some of the world's biggest stars. Life caught up with him ahead of his red carpet appearance at Cannes tonight

published : 19 May 2017 at 04:00
newspaper section: Life
writer: Story: Kong Rithdee
SPONSORED CONTENT
A scene from A Prayer Before Dawn, a French production shot in Thailand and premiering at Cannes this week. Photo courtesy of Festival de Cannes

Vithaya Pansringarm started acting eight years ago at the age of 50, thinking he'd do it just for fun. Since then, he can tick off an illustrious roster of stars he's acted with: Ryan Gosling, Jason Statham, Kristin Scott Thomas, Mira Sorvino, Bradley Cooper and the entire cast of The Hangover Part II.

"Sometimes I got the lead role, other times I just had a bit part. Last month I shot a movie with Jason Statham, though for just one scene," said Vithaya. "I don't mind if it's a small role and you don't even remember seeing me. I'm having a good time doing this!"

At 57, Vithaya is one of a few Thai actors to have cornered a specific market: Foreign film productions shooting in Thailand. And he seems to have picked the right projects. Tonight the Thai actor will walk the red carpet of the Cannes Film Festival, the world's most influential cine-event, as part of the French film A Prayer Before Dawn, a prison drama shot almost entirely in Thailand. This is the second time Vithaya has been invited to the glittering rendezvous of Cannes -- four years ago he was in the film Only God Forgives, a lurid revenge thriller in which he got to beat up Ryan Gosling real bad, and which was screened in competition at the French festival.

So while there's no Thai film invited to screen at Cannes this year, Thailand will be there in image and in person. Another actor to walk the red carpet with Vithaya is Panya Yimmumphai, better known as Keng Laiprang, an eccentric, tattoo-covered internet star (with a million followers). 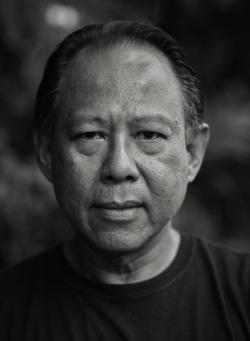 The final detail of A Prayer Before Dawn has been kept a tight secret before the Midnight Screening slot. But the outline of the story is well-known. The film, directed by French director Jean-Stephane Sauvaire, has been adapted from the memoir of the same name by Billy Moore, a British convict who spent years at Klong Prem Prison, converted to Islam and became a muay Thai boxer through a self-improvement programme initiated by the warden.

A Prayer Before Dawn is a French movie, though at least half of the technical crew, from the art department to costume designer and most of the actors, are Thai. The film was shot at an abandoned prison near Bangkok, except a few scenes where it was shot in the Philippines.

"I'm not a talented actor, not at all, I wasn't trained to do, say, Shakespeare or something like that. But I was lucky to be at the right place at the right time, and one thing leads to another," said Vithaya, whose main job is running a dance studio with his American wife.

"I lived in the US for eight years when I was young, but I still speak English with what I call a 'Southeast Asian' accent -- meaning no accent. When foreign directors want to cast an 'Asian' character, they either cast locals who speak English or they cast Asian-American actors, many of them speak English with the American accent. So my weakness -- the Southeast Asian accent -- is my strength, because it means I don't come across like an American trying to play Asian."

Vithaya's first role was in the TV movie The Prince & Me in 2009, a Danish production set in a fictional Asian kingdom. His role in The Hangover Part II -- a minister -- is so brief you might have missed him, and it was the psychedelic head-trip Only God Forgives in 2013 that gave the Thai actor an international profile, and a Cannes appearance. Playing Chang, a monk-like policeman wielding a samurai sword of justice, Vithaya exemplifies the cool mystery of the Orient, inhabiting the postmodern Bangkok netherworld.

Other productions he starred in are smaller in scale, sometimes straight-to-DVD material that Thai audiences aren't familiar with. In all, Vithaya -- and other actors who work with foreign productions -- are part of a big industry that brings in billions of baht in revenue to the country every year. At Cannes, too, the Thailand Film Office has a pavilion to promote the country as a destination for foreign film shooting. 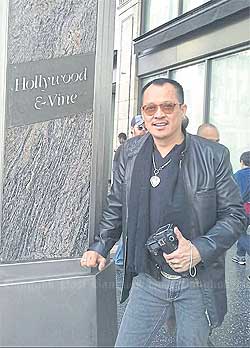 In 2015, foreign productions brought in 3.1 billion baht, the highest ever, before dropping to 1.5 billion last year. In 2016, 36 feature films were shot in Thailand, as well as 284 commercials, 122 documentary films, 38 music videos and 10 TV series. The productions from Japan, India, China and Europe are the major spenders who keep coming back to film on Thai shores. As a rule, every production applying for a permit to shoot will have to submit the script for prior consideration.

Sahajak Boonthanakit is another Thai actor who has worked in foreign productions since late 1999. Mostly having small roles, he's appeared in nearly 50 foreign titles, from The Beach in 2000 to The Lady, and the latest Hong Kong production shot here and starring Donnie Yen.

"Thailand has plenty of skilled crew members that impress foreign professionals who come to work here. But what we don't have enough of is actors," said Sahajak. "Sometimes I get bored seeing myself in foreign films! They only think of me and Vithaya [when looking for actors]. One reason is we don't have many actors here who're fluent in English; the other reason is perhaps the actors prefer to be on TV."

Sahajak, who also played a cop in Only God Forgives, said that most of the time he's cast to play bad policeman or gangsters.

"Thailand has many other aspects, but I understand how movies want to dramatise those parts of society that are more exciting," he said. "I just hope they don't overdo it sometimes."

For Vithaya, the film A Prayer Before Dawn may portray life in a Thai prison, and yet it's about a life-changing initiative that also helps inmates. The actor, who has also played his fair share of stern-faced villains, said that movies that avoid stereotypes are the most interesting, and he believes that his looks and acting can at least lift the image of Thailand through serious performances in international films.

"I play a lot of villains. But I believe they're not stupid villains," he said. "That's something."