A beacon for tolerance

Openly gay and with a young family, British Ambassador to Thailand Brian Davidson aims to put the advancement of human rights at the top of his agenda

Smartly but casually dressed with a hint of colour, British Ambassador to Thailand Brian Davidson descended from the second floor of his residence within the British embassy on 14 Wireless Road and greeted us with a smile and quick hello. Soon, we found ourselves sipping iced lemonade inside a green room. A framed portrait of a beaming Queen Elizabeth II gazed down from the wall.

Earlier this month, the ambassador opened his home for the launch of the newly-founded Manushya Foundation, a regional non-governmental organisation that aims to empower and engage with communities in its drive towards the advancement of human rights and social justice.

The foundation received a two-year grant from the British Foreign and Commonwealth Office's Magna Carta Fund for Human Rights and Democracy, administered by the British embassy in Bangkok in its aim to help develop the capacity of civil society within Thailand.

The reception saw a warm gathering of civil society and human rights activists from across the country, where they freely discussed and shared ideas throughout the evening.

Davidson said it's within his responsibility as an ambassador to promote the relationship between the United Kingdom and Thailand, and oversee collaboration in areas such as politics, law enforcement and more.

"We look at what Thailand is trying to do with its 4.0 vision and see how the UK can complement that direction," he said, adding that the embassy will continue working with both the government and civil society to help Thailand achieve its own developmental aims for sustainable economic and political growth.

Davidson would also like to change people's perception of the UK. Many people may associate the country with its history of empire, but the ambassador said his country has yet to be known for its openness towards ethnically diverse communities.

"For one thing, we support same-sex marriage. We give LGBTI [lesbian, gay, bisexual, transgender and intersex] people the right to marry the people they love. An equal right in a society that respects different traditions and cultures." 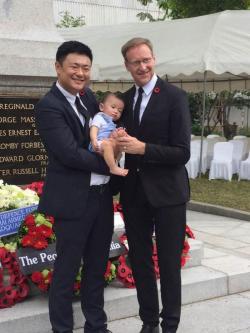 The ambassador himself is living testament to that ideology. As an openly gay man, Davidson married his husband Scott Chang under British law at the British embassy in Beijing in 2014, when he was serving as the consul-general in Shanghai.

Since relocating to Thailand, he called the transition easy, praising the country as quite a tolerant society that is respectful of his family.

The British embassy in Bangkok, as one of the city's oldest diplomatic compounds, is a place of tradition and history, as one may assume. But ever since June last year, when Davidson began his post, his modern family of three -- he, his husband and their young son Eliot -- have been calling this place home.

"Some would see it as an unconventional family, but really there is nothing unconventional about having two people with a child we love," said Davidson. "We have an adorable young boy with us, too. I mean, who doesn't like a cute kid?"

What he found was a bit ironic, however. While Thai society seems tolerant and diversified, its bureaucracy sadly has yet to reflect that.

"My husband, as we are legally married, is not recognised as my husband by the Thai bureaucracy. His visa says he is a domestic servant," said the ambassador in dismay. "So there are some anomalies. And that is something I'd like to push to get recognition over."

Around the world, there are still several countries which condemn homosexuality as illegal. The UK, and even Thailand, can be considered as luckier countries that have fared better in this situation. Last week, for example, it was announced same-sex couples will be able to marry in some churches in Scotland, the first such move for a major Christian church in Britain, even though same-sex marriage has been legalised in the country since 2014.

However, even in a place where it's very accepting, issues pertaining to gender equality remain a challenge.

"The process of equality and diversity is never complete," he said. "Thailand is a more liberal, tolerant society, but I'm not going to pretend that it's perfect. In the same way, I wouldn't for a second pretend that situations in the UK are absolutely perfect either."

Issues such as discrimination in a workplace still exist for LGBTI people and especially the transgender population, Davidson opined. And it's something that requires different sectors to work together to show that everyone is equal in this pluralistic society.

"It's for each society to look critically at itself and say what more could we do to ensure that every single individual can achieve their full potential, that we're not consciously or unconsciously putting barriers in the way for people to fulfil their potential. We also should make sure that we're not somehow causing people to feel they need to be anxious about being themselves."

The ambassador called his experience working with the Foreign Office as empowering for all the support he has received from his colleagues.

"[The Office] doesn't just accept that there are ranges of different family units and people, but it actually goes out of its way to develop that diversity of talent. We, as an organisation, are then full of people that not only represent British society, but also are achieving their full potential."

As a gay man, Davidson said he doesn't feel his life is particularly any more challenging than what other ambassadors face. In the end, he said it can be more difficult to be a working father with a young child, and to try and find the balance between work responsibility and family life.

His family is a happy little unit, and it will soon expand with a new baby due to arrive in July.

"We'll be a family of four by then," he happily shared. "There's nothing special about me, really. I just happen to be an ambassador. I happen to be gay."