A new tax is a start, but more action is needed to address Thais' long-standing addiction to the sweet stuff

Back in 2007, the average Thai consumed 20 teaspoons of sugar per day. But the worst was yet to come. Three years later, the estimated daily sugar intake was 23 teaspoons per person. Now the number is 28 teaspoons.

This figure from the Thai Health Promotion Foundation is more than four times the latest recommended amount for daily intake according to the World Health Organisation (WHO) in 2015. Daily consumption should be just six teaspoons.

"One in five Thai school kids drink carbonated beverages every day," said Dr Napaphan Viriyautsahakul, director of the Bureau of Nutrition under the Ministry of Public Health's Department of Health. "While Thailand successfully eradicated malnutrition, obesity is still an ongoing issue. According to statistics, one in three Thai kids is likely to grow up and become a fat teen. Two in three fat teens will in the end become fat adults."

Excessive sugar intake has long been treated as the country's, if not the world's, major public health concern. Despite measures both from the state and private sector to reduce sugar intake among Thais, our people's waistlines keep expanding, which consequently leads to non-communicable diseases (NCDs). According to the 2014 report from the National Health Commission Office of Thailand, the Thai Health Promotion Foundation and Mahidol University's Institute for Population and Social Research, Thailand had around 16 million people classified as obese -- the second highest number in Asean countries after Indonesia. Also in 2014, there were approximately 670,000 new cases of diabetes in the country, the third highest in Asean. 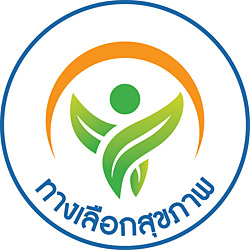 Sweet beverages that contain less than 6g of sugar per 100ml will be allowed to print the "Healthier Logo" on their packages. So far, there have been 216 beverages, 43 milk products, nine seasonings, five instant foods and three snacks that have been awarded the logo.

In an effort to keep sugar levels among Thais in check, a new excise tax on drinks with sugar content will be introduced on Sept 16 as part of the amended excise tax act. Based on the new law, drinks that contain less sugar per 100ml than the Finance Ministry's threshold will be levied a lower excise tax than that for drinks with higher sugar content. The rates will be divided into three categories -- 10-14% sugar, 14-18% sugar and 18% or higher. The tax rate is yet to be announced. To put it simply, less sugar means less tax burden on the manufacturer's side.

Director of the Tax Planning Bureau of the Excise Department Nutthakorn Utensute said in a recent seminar entitled "Sugar Tax And The Industry's Adjustment" that the new levy on sugary beverages is expected to not just help Thais curb their sugar intake but also encourage businesses to change their products by reducing added sugar for the benefit of Thai people's health.

"For better health, it is impossible to just change consumers' habits without changing manufacturers' behaviour. Rich people will always find sugary drinks affordable despite price increases. So businesses have to adjust their merchandise. That is to reduce the amount of added sugar for a lower tax burden, which will subsequently have an impact on consumers' behaviour."

The new excise tax on sweet beverages will have a two-year incentive period. This means two years from Sept 16 is the duration manufacturers have been given to change their products. During these two years, they will pay pretty much the same tax rate. But from Sept 30, 2019, onwards, it is a "penalty period" in which if they still put the same amount of sugar in their goods, their products will be levied by a progressive tax rate. As of now, sugary drinks, including carbonated beverages, energy drinks and beverages with fruit or vegetable content lower than the 10% requirement, are taxed at 20% of ex-factory prices.

The idea for a sugar tax, added Nutthakorn, is not a whole new concept but has in fact been discussed among public and private sector organisations for more than three years. The biggest question is: Will the tax be able to really lower people's craving for sugar and make them healthier?

"Tax is just a direction from the government," continued the Tax Planning Burean director. "Non-tax measures will be needed to reduce people's sugar intake too."

Director of the Food and Drug Administration's (FDA) Bureau of Food Tipvon Parinyasiri echoed the same viewpoint. Both tax and non-tax measures must be implemented.

"Currently there are 3.5 million diabetes patients in Thailand and 25.5 million people are reported to fall victim to high blood cholesterol. Clearly, we haven't taken enough preventive actions," said Tipvon, citing the 2014 NCDs report stating the country spends more than 335 billion baht a year on medical treatment for NCDs, which is equivalent to almost 19,000 baht per person, per year, while prevention requires far less money.

One active measure that the FDA has been carrying out in collaboration with the Nutrition Promotion Foundation under Mahidol University's Institute of Nutrition is the "Healthier Logo". In summary, the Healthier Logo is awarded to products that pass certain health criteria. Sweet beverages that contain less than 6g of sugar per 100ml are allowed to print the logo on their packages. As of now, there are 276 products that carry the Healthier Logo -- 216 of them are beverages.

"Healthier Logo is a marketing tool," commented Tipvon. "It shows that a certain product is not too sweet, not too oily or not too salty. The manufacture of products with the Healthier Logo passes the standard and is properly controlled in terms of the amount of added sugar, fat and sodium."

For products to have the Healthier Logo printed on them is like killing two birds with one stone, said the Bureau of Food director. "With the Logo, your sweet products are tax-exempt. At the same time, they will be in high demand because they are labelled as healthy products."

"Whether or not sugar tax will help with people's health is for us to see in the future," she noted. "But while we levy tax, we must also make non-tax moves because fat children will become fat adults who will become fat elderly people. So health literacy means we must create a key message to raise people's awareness regarding the importance of curbing sugar, fat and salt by focusing on digital channels.

"We must provide people with more platforms where they can receive health-related information. Healthy environments must be set up such as sugar- and salt-free villages, carbonated drink-free schools or hospitals serving healthy diets. Thai people must also be aware of the healthy food trend."

"We must also trick our tongues into getting used to appropriately seasoned food, train our tongues to have literacy," Tipvon added. "Reducing sugar, fat and salt content in food must be carried out through our lives. Tell yourself to take pleasure in food that is quite sweet or salty only once a month. Thailand has to beat its neighbouring Asean countries when it comes to keeping its people's sugar consumption under good control."