Taking on the traffickers

Life's unkindnesses turned Wirawan Mosby, 2017 recipient of the US Secretary of State Trafficking in Persons (TIP) Report Hero Award, into a woman of valour. 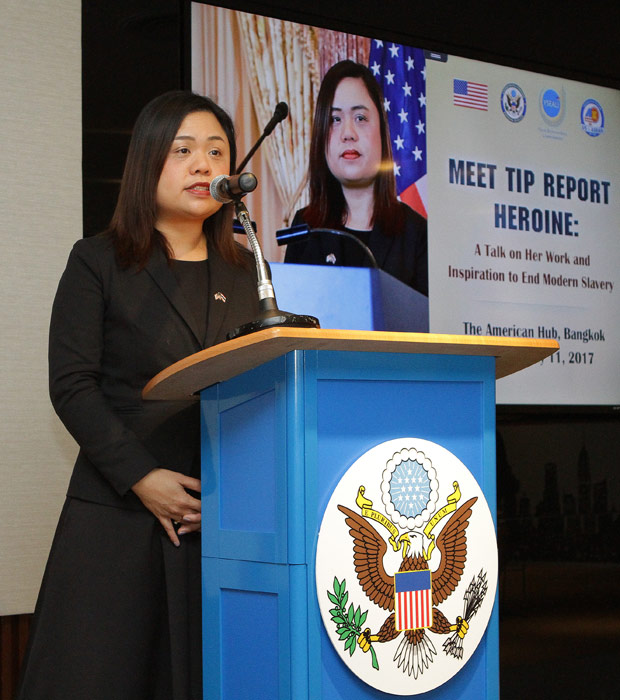 In a ceremony held in Washington last month, the Chiang Mai activist received the award from the US State Department, with First Daughter Ivanka Trump beaming next to her. Small and determined, Wirawan has been honoured for her years of tracking and pursuing sex traffickers in the North. Records show that she has personally accounted for 20 arrests of suspects.

Seven years ago, Wirawan, who was born in Chanthaburi but lives in Chiang Mai, stepped outside her comfort zone to dedicate her life to preventing human trafficking, as well as helping child victims and those who have suffered sexual abuse. A driving force behind her activism was a childhood desire to help a little girl whom she knew had been sexually exploited.

"I was too young to help her back then, so there was always a passion in me to be the voice of the voiceless when I grew older," said Wirawan, or Boom, the first Thai to win the award.

"When I became a lecturer in English literature, a number of my students used to confide in me about being sexually abused. Soon I found that such practices were common. I was involved with missionary work and I felt a calling to contribute my efforts in this area. I also felt in my heart a desire to see Thais become a society of willing volunteers."

Wirawan's small operation is purely based on volunteerism, without her making a single baht from it. In the past year, they have received donations from abroad which has enabled her to hire two local staff.

"That is why the award belongs to the entire team I work with, including law enforcement, who have been both dedicated and eager to address these social ills head on."

The honour given to Wirawan is an acknowledgment of her human rights work, and it also comes at a time when Thailand finds itself stuck on the Tier 2 Watch List of the US's Trafficking in Persons Report -- which indicates that more work needs to be done on the government level to tackle the problem. For her part, Wirawan, who stresses the help she's constantly received from state officers, hopes the TIP Report Hero Award can help their efforts to do better.

Modest and unassuming, Wirawan is the director of the Hope Understanding and Grace (HUG) project, and she has spent countless hours building a network to best serve the multitudes of trafficking victims, the youngest being just a couple of months, to receive the help they need to lead as normal lives as possible.

Based in Chiang Mai, she spearheaded the opening of ACT (Advocacy Center For Children Thailand) House, the first such centre in Southeast Asia, which also has branches in Pattaya and Phuket. Plans are under way to have a centre in Bangkok. 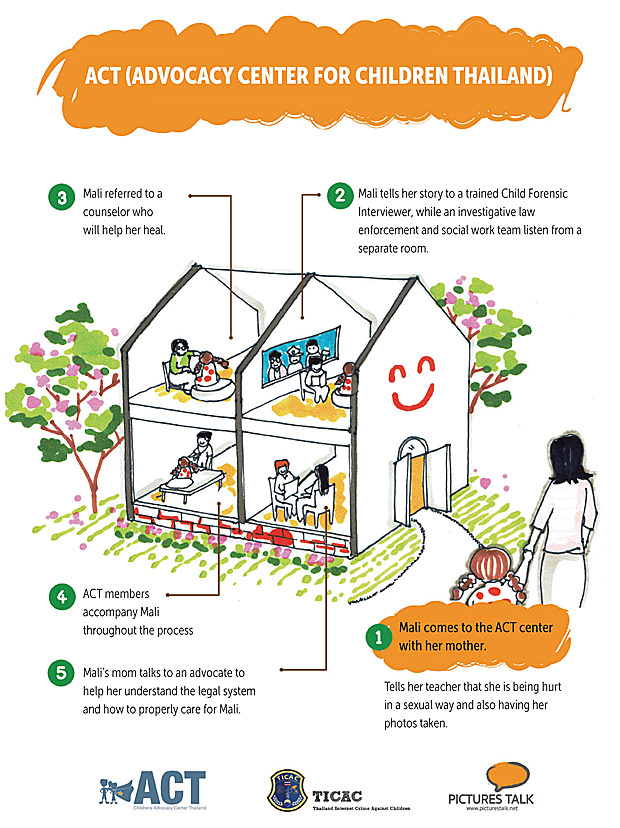 She is also an active member of the Thailand Internet Crime Against Children task force. As an integral part of this team, her role is to collaborate with law enforcement and other agencies to facilitate investigation and prosecution of internet-facilitated crimes against children in Thailand.

"We have a dedicated group of law enforcement officers who have made it possible for us to not just bring about a sense of normalcy in the lives of child sexual survivors but also put perpetrators behind jail," said Wirawan.

"However, we have a long way to go. To make further progress, we need to educate and train people on how to properly address these issues. Preconceived ideas and misconceptions have to be replaced with the right type of knowledge so victims will be encouraged to seek help. They have to be told they are not at fault. We need more people with a heart for victims of sexual and domestic violence. It is pivotal to not prejudge their actions."

More recently, her role has been to provide investigative support through fact finding, case co-ordination and consultations with various law enforcement, social work, NGO and government officials; and conducting key forensic interviews with child victims of trafficking and sexual abuse.

Wirawan is adamant about using her higher profile of late to forge ahead with promoting the expansion of the ACT concept throughout the country, seeking a victim-centred approach.

Her work credentials include being a licensed Child Interviewer and being invited by the US Federal Bureau of Investigation/Homeland Security to observe their work with child forensic interviewing, using a multidisciplinary team approach.

She has also been an official speaker on tackling human trafficking at TEDx Chiang Mai.

"I have to stress that we cannot expect the government to fix every issue," she added. "It is the responsibility of each Thai citizen to work together to solve these problems. I have so far received exceptional support from the Royal Thai Police and local NGO partners."

While laws have their place, Wirawan said greater understanding of how to deal with child sex crime victims is urgently required.

She said if one person is the victim of human trafficking, and if she or he is not ready mentally or physically to share her story, enforcing the law to do so should be the last resort. It is more important to show empathy as a human being, give the person a chance to heal and be strong and ready to confront what they have experienced. The law cannot restore a broken soul.

Nipping the problem in the bud can only be successful when it is done collectively, she remarked.

"Social media has a huge influence on our lives, so if you happen to see yourself in a group where people are viewing child pornography, you can block it and encourage others to do so," she said. "Also, take it upon yourself to report it to the police.

"Families have to also take a greater initiative to speak with their children about such issues as online human trafficking and help the child to be better equipped. I always tell my children what I do and how they can be safe. Parents need to keep a tab on just how much access their children have to the internet. Set up the computer in the living room so it can be used purely for educational purposes.

"If everyone collectively takes it upon themselves to do something about this, I believe we can make enormous progress. It is a team effort which needs to be conducted in a holistic manner."

Over the last two years, Wirawan said the Thai government has been taking a proactive role, especially in conducting more through investigations and taking the issues more seriously.

Here again, she stressed that society should not solely depend on law enforcement to solve this complicated issue, because it is a joint effort that includes counsellors, parents and others.

Public awareness to deal with such issues is always required, she said, so everyone should be encouraged to lend a hand in their own special way.

"It can start with what you are passionate about and what your strengths are," Wirawan said. "If you are into blogging, use this skill to bring about better awareness. If you are a singer, you can dedicate two minutes to victims of human trafficking. My mother has green fingers so she decided to spruce up the garden at our child advocacy centre, so when visitors come in they enjoy the scenic landscape she has built. My husband is a computer security engineer so he uses his computer skills to help law enforcement. So the list is never-ending. All that is needed is a desire to help."

Being touted as a human rights hero comes with responsibility that has made Wirawan's resolve even stronger as she said: "More than following policies, I would like to focus on what our team can do best, where our strengths are.

"What has worked for me so far is that I work with people who are at the grass-roots level. So when it comes to the police, I work with the people working on the cases. People might have different strategies in handling such cases, but for me this has worked perfectly.

"Yes, with this award, it might get easier to speak with higher ranking police officers, but I believe my purpose is best served working with police officers at grass-roots level."

Seiko dedicated to the ocean