Cats may rule the internet, but purebred Thai cats are hard to find, and a breeder is working with Kasetsart University to correct that

For millennia, cats have been popular as pets. In the internet era, cats rule, beating dogs and other animals as the kings and queens of newsfeeds, stars of viral clips and an endless supply of adorable photos. There are celebrity cats with millions of social media followers.

Upon closer inspection of this feline craze, it's clear that foreign cats are the ones dominating the scene, from fluffy Persians to chubby Scottish folds. Meanwhile, Thai cats -- different from Siamese cats, as we will explain -- are becoming harder and harder to find.

Where are all the purebred Thai cats?

Thailand is home to several original old-cat breeds that date back to the Ayutthaya period. At the National Library, you can find Tamra Maew -- or the Treatise On Cats -- a book of poems with descriptions of Thai cats written in samut khoi manuscripts some hundreds of years ago. Among the original 23 cat breeds, according to the treatise, only five can currently be found, while the rest are believed to have gone extinct, their unique traits eliminated over years of crossbreeding. 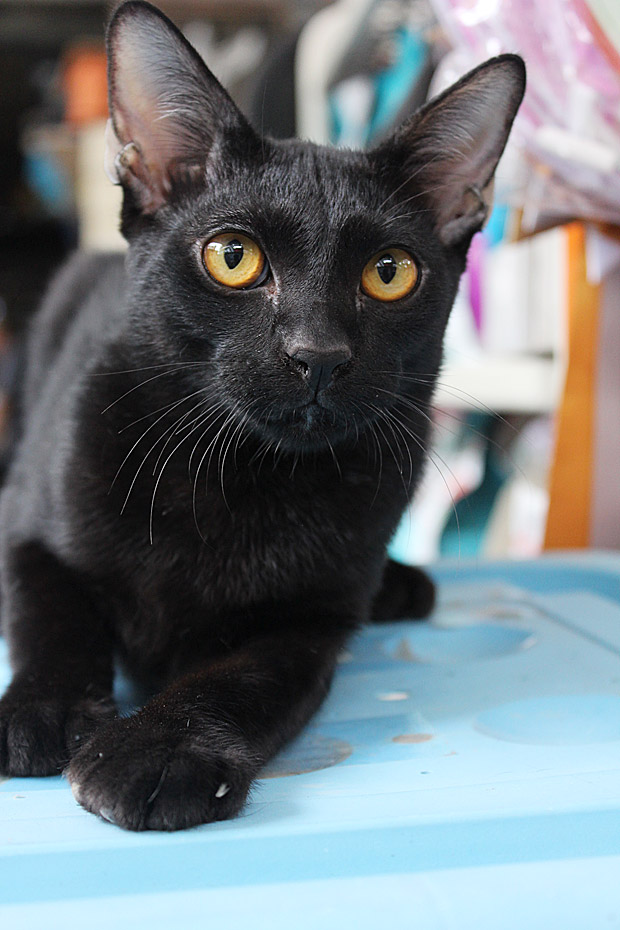 Among the most popular and well-known of the group is Wichianmat, its name meaning "moon diamond". Its coat is ivory with point colouration in a shade of dark brown (meaning a pale body with darker extremities). This particular breed was exported from Siam to the West in the 19th century. Through generations of separate breeding, these cats later developed into the Western-made Siamese cat, separate from the Wichianmat breed.

Korat (also known as Si Sawat or Malet) comes with a silver-blue coat and yellow (or yellow-green) eyes. This breed is believed to have originated in Nakhon Ratchasima.

One breed very similar to a Bombay cat is Konja, a solid-black, panther-like feline with yellow-green eyes. It is said to walk with elegant strides similar to those of the mythical lion Singha.

Thailand is also home to Khao Manee (White Gem, also known as the Diamond Eye cat), a solid-white cat not traditionally recorded in most Tamra Maew, but is still considered an old Thai breed. It is believed to have originated in the Rattanakosin period. The cat comes with either gold or blue eyes, or one eye of each colour.

The last of the five is Suphalak, a cat breed with solid reddish-brown coat that can be described as either copper or chocolate, with pinkish-orange paw pad. The breed was believed lost until three years ago when it was successfully resurrected by a group of Thai breeders. Suphalak looks similar to the Burmese cat, though some of the features are different.

As these cats were kept within circles of upper-class men in the past, or even in the royal palace, they are not as widespread among the public. Their small population also saw a decline, with desirable traits ending up lost in the gene pool after continuous crossbreeding. 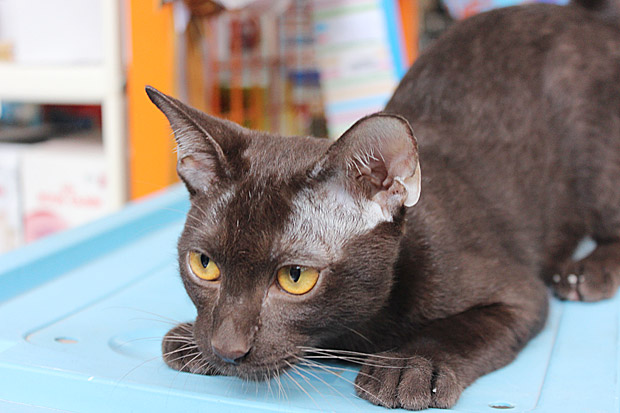 Among the five breeds, one particular breed that has faced near extinction is Suphalak.

One of the key persons in resurrecting these copper cats was Preecha Vadhana, an experienced Thai-cat breeder at the Siamese Cat Bang Rak cattery. Preecha has been breeding Thai cats for a decade, though he has been focusing on Suphalak in recent years.

"The Suphalak breed has been missing for a long time. Before, we were only able to find random strays, like one cat with similar colours that may appear in a far province. There was nobody who bred them intentionally. Well, some actually did, but it didn't really work, as they ended up with kittens of other colours. No one was able to find a cat with characteristics as described in the old book," said Preecha.

Through selectively breeding cats with similar characteristics to the original Suphalak, Preecha was able to bring back the solid reddish-brown coat in some. However, other kittens do end up with different coat colours or point colouration, denoting a hidden recessive trait deemed undesirable for a Suphalak.

In Preecha's quest to develop purebred Suphalak, he now works with a team from Kasetsart University to dig down to the cat's DNA to aid in more efficient, selective breeding, rather than judging potential cats by observation alone, as underlying traits could go unnoticed.

"This way, we can know in advance which cats we should breed together. We can predict the offspring's characteristics," said Janjira, adding that the procedure is widely done for commercial animals, though not really with domestic cats.

Aside from its blood, the cat's tail was also scanned for yet another desirable trait for Suphalak: a long, straight tail with no crook at the end.

The gene pool for Suphalak is very small, she said. The known number of Suphalak for the entire country is less than a hundred. "We're in a development stage," Janjira explained. "At this point, I wouldn't call what we have 100% Suphalak."

Thai cat breeds, according to her, are considered ancestors to several other breeds around the world. The Himalayan cat, for example, was developed from crossbreeding Wichianmat with Persian.

"We have many original breeds of our own, yet we have never really tried to preserve them. Suphalak has been missing, and if we do nothing they'll definitely be gone.

"These cats are very much our national treasures. It's good that several entities are now making an effort at preservation. We do hope that, in the future, we'll finally get a true Suphalak that fits the old description perfectly." 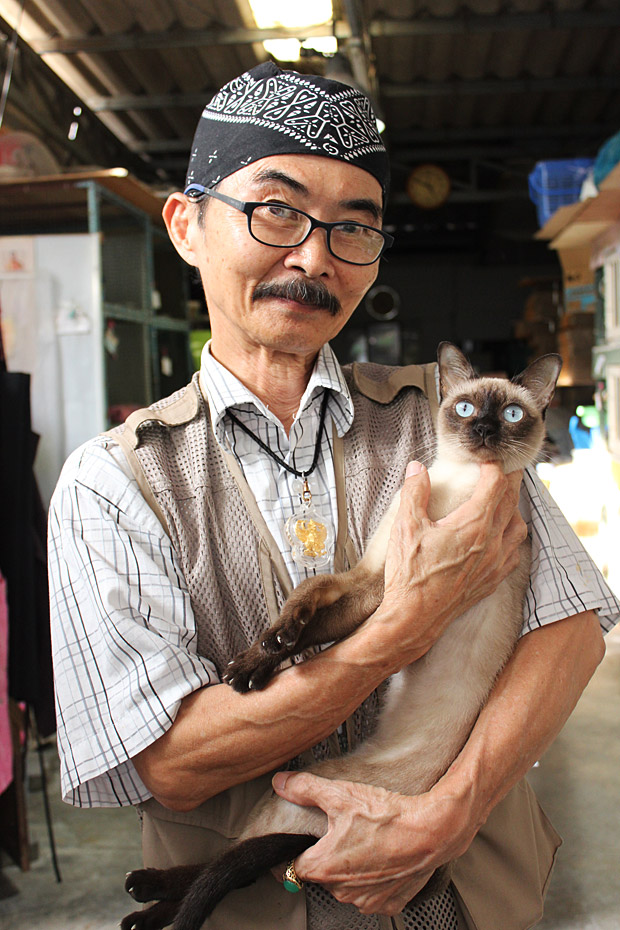 Preecha Vadhana and his Wichianmat.

To Janjira, the fact that Thai cats are losing their popularity to foreign cats is actually not strange.

"People are so used to seeing these cats that they don't feel protective of them, or feel that these breeds actually need to be preserved," said Janjira.

On the other hand, the academic said that in recent years she has noticed rising popularity for these cats among foreigners.

"When Westerners see our cats, they are in awe because they don't have these same ones in their own country. In a similar way, they are so used to seeing cats with long hair that they get excited over our shorthair cats."

Panarat Kamchat, president of The International Maew Boran Association (Timba), said there are fewer than 10 catteries in the country engaged in breeding Thai cats. This is very small compared to those for other types of cats. 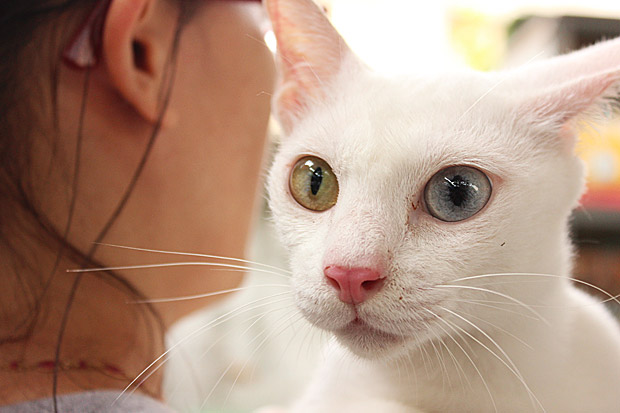 "Around three to four years ago, the general public was rarely aware of our cats, their interest limited to a niche group. But with the introduction of social media, we've seen more people showing interest," said Panarat.

Timba now encourages owners to register their Thai cats with the association, to create a database of information from around the country, as well as to prevent inbreeding.

Aside from the association that works to preserve these Thai cat breeds, there are also the Thai Cat Centre in Amphawa, Samut Songkhram, and the Korat Cat Conservation Centre in Phimai, Nakhon Ratchasima, to educate the public about these cats.

On July 28, the Cat Fanciers' Club of Thailand (CFCT) will be holding a Thai cat contest at CentralPlaza Westgate at 12.30pm, as part of the 17th Thailand Cat Show. Interested owners can register their pets on the day from 11am-12pm. Registration fee is 200 baht. The winning prize for each breed is 3,000 baht.