To catch a (wildlife) criminal

Continuing our Female Leadership series, Life talks to Kanita Ouitavon, who founded the first wildlife forensic lab in the country

A small round sample of smuggled ivory is put in a zip-locked plastic bag. Although the piece is the size of a bead, it is hard and must be hammered many times before being broken into little pieces. The specimen is put in a test tube so a freezer mill can grind and pulverise the ivory sample for a DNA test.

The lab is known as the first DNA forensics unit for wildlife animals in Thailand.

The person who has driven the project since 2009 is Kanita Ouitavon, 47, chief of the Wildlife Forensic Science Unit. She saw the need of the DNP to have its own forensic lab in order to complete the department's mission on wildlife conservation.

"Wildlife forensics gives scientific proof that can be used as legally admissible evidence in court. DNA evidence is an important tool for convicting people of wildlife crimes," she said.

Wildlife forensics, which employs similar techniques to those used for human forensics, plays an important role in a wildlife-crime investigation because it is not easy to identify types of smuggled animals or processed goods with the naked eye. The DNA test can address questions of species, geographic origin, individual identity and family links. The lab results help the enforcement of the law, which includes the Wildlife Reservation and Protection Act and the country's commitment to protect endangered species according to the Convention on International Trade in Endangered Species of Wild Fauna & Flora (Cites).

According to the United Nations Office on Drugs and Crime, the illegal global wildlife trade is the world's fourth-most profitable criminal activity after the trafficking of humans, weapons and drugs.

The UN agency also stated that Thailand is regarded as a global hub, where major suppliers from Sub-Saharan Africa and Southeast Asia transport protected animals or illicit goods such as elephant ivory, rhino horns and pangolin scales to major markets like China, the US and Europe.

"The illegal wildlife trade is one of the transnational crime syndicates. To take an action against the criminals requires evidence. The most reliable evidence is DNA," she said.

Kanita finished her bachelor's and master's degrees in forest ecology at Kasetsart University before completing her doctorate in biological sciences at the same university. After graduating, she thought she would be a scientist working in a lab, but soon realised she could do something more for animals.

"In the past, no one in the DNP knew about wildlife forensics. At that time this work did not exist. It's a loophole that needed to be fixed. As I have knowledge of wildlife ecology and DNA analysis, it's my obligation to find solutions; otherwise, the problem would not be solved," she said.

Before the lab was launched, the DNP had to submit evidence of illegal wildlife trade to university labs. Although the forensic labs can help verify the identity of the animals, there are two major problems, said Kanita.

When a case was brought to court, university lecturers did not have a duty to testify. In addition, the investigation must have evidence protection. When those samples were sent to a university lab, there was no secure process to guard the samples.

"It was fortunate that the Wildlife Conservation office director, Chatchawan Pitdamkham, understood the problems. In 2009, he allocated the first 1.65 million baht budget for me to set up the wildlife-forensics lab," Kanita recalled.

She spent the budget on purchasing basic equipment such as a centrifuge to separate DNA from a liquid and a polymerase chain reaction machine to amplify segments of DNA. With limited space in the DNP's headquarters in Bang Khen, her lab is allocated to three separate areas.

The first part of the laboratory houses an administrative office and evidence freezer. The lab space is wide enough for two people to pass each other. The second zone is a clean-room laboratory located on the back of the admin office. The clean room looks like a temporary office. It is a two-storey modular building. The last zone, the lab, was set up in 2012 by renovating a stockroom on the 7th floor of the Office of the National Parks. It houses a genetic analyser and a DNA bank. At present, her lab has 13 staff members, only three of whom have permanent positions; the rest are yearly contractors. The lab is operated with a small annual budget of 1.5 million baht.

During the first year of operation, Kanita had a chance to attend a month-long workshop on advanced wildlife forensics by the Trace Wildlife Forensics Network in the UK. Trace stands for Tools and Resources for Applied Conservation and Enforcement. It was a non-profit organisation founded in 2006 to promote the work of forensic science in wildlife conservation and law enforcement.

"Attending the workshop helped me a lot. It was the first time I truly learned about forensics. It also gave me direction and a knowledge of the chain of custody," she said.

Chain of custody is a verifiable procedure. It is an important process to maintain the integrity of a sample in a criminal case. Every step in the process must be documented, monitored and verified.

The process starts when evidence or samples are sent to the Wildlife Forensic Science Unit. A staff member will register the samples and give them official identification numbers in its database system. Each case will have its own folder, like a folder containing the medical records of a hospital patient.

After the registration process, another lab technician will take pictures of the samples and prepare them for the process of a DNA test.

"Our lab is very specific because we work on wildlife criminal cases. We make sure that the samples sent to us are secure and every step of our work can be checked," she said, adding that the chain of custody can ensure that in every related party of the case there will not be evidence tampering.

During its eight years of operation, the Wildlife Forensic Science Unit has handled about 200 cases and analysed about 3,500 samples, or more than 400 samples on average per year. Evidence includes dead animals or parts, such as in the recent case of 21 rhino horns from Ethiopia (worth 173 million baht) and many finished products. This evidence was brought to the lab by government agencies, including officers of DNP, the Customs Department and the Royal Thai Police.

The most high profile case is the tigers of Wat Pa Luang Ta Maha Bua, known as the Tiger Temple, in Kanchanaburi. The team had to analyse DNA samples of 147 tigers and 40 dead tiger cubs to find parental relations.

"It is the most complicated case that we've ever done. Our task was to find out which pairs are biological parents of which tiger. So we had to run thousands of DNA parentage tests to find out," she said.

The team spent about five months on the paternity tests and matching. They started by testing DNA of the first seven tigers from the temple. They identified tiger subspecies including Bengal, Siberian and Indochinese, and matched their genetic fingerprints to find family links.

The team found that about 10% of 187 dead and alive tigers did not have the DNA matches with either mother or father or both parents.

In addition, the Wildlife Forensic Science Unit has another big issue to solve. Last September, Prime Minister Gen Prayut Chan-o-cha invoked Section 44 of the interim constitution to order that all owners of domesticated elephants have DNA samples of their animals collected. The government wanted to prevent an attempt to illegally turn wild elephants to domesticated elephants, and to show the country's measures to Cites in order to prevent trade sanctions.

The forensic lab received 3,778 DNA samples of the domesticated elephants nationwide. They have 180 days to run the DNA tests, analysing the data and submitting a report of bloodline links. The deadline is the end of next month.

With limited time, understaffing and the huge amount of samples, Kanita called the project "very crazy work, but it is our masterpiece".

"This is the first time the country has had a DNA database of domesticated elephants. The project is a demanding task, so we have a dedicated team working on it. The work is about to finish, and I'm confident that we will complete our task in time," she said.

Her next move is to develop a DNA database of captive tigers nationwide. As with the elephant project, the aim is to prevent unlawfully domesticating wild tigers. The project will kick off next year.

The chief has other ambitious plans. She wants to develop a genetic database of wild animals in the Kingdom. During the initial phase, she will start with the world's most-traded animals: elephants, rhinos, tigers and pangolins.

"The fight against illegal wildlife trade is the big issue. If the government sees it and realises the importance of wildlife forensics, it should offer serious endorsement and upgrade this unit to be an institute like the Central Institute of Forensic Science," Kanita said.

If the lab grows, it can also help solve illegal wildlife trade in neighbouring countries like Laos, Vietnam and Cambodia. The lab can even expand its scope of work to cover other natural resources, including protected rare wood (like rose wood), plants or even marine life.

"I've already started the wildlife forensic lab and I wish to see it develop into an institute like those handling human forensics. The more strength the wildlife-forensic science lab has, the more power our country will have to fight illegal wildlife trade," she said.

2009: The lab is founded as the Wildlife Forensic Science Unit and operates under the Wildlife Conservation Office of the Department of National Parks, Wildlife and Plant Conservation with an initial budget of 1.65 million baht.

2012: The unit acquires a DNA sequencer, the smallest machine of its type, but the most expensive equipment of the unit. The price is 7 million baht. The machine allows the team to completely analyse wildlife species in the lab.

2016: The team examines 187 DNA samples of tigers and dead cubs from the Tiger Temple.

2017: The forensic lab has worked on 3,778 DNA samples of captive elephants since April, and will finish DNA profiling and the DNA database by the end of September. Kanita also plans to develop a DNA database of captive tigers and wild animals nationwide. 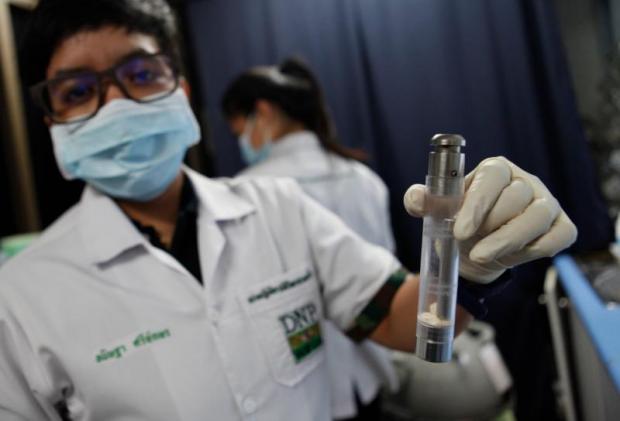 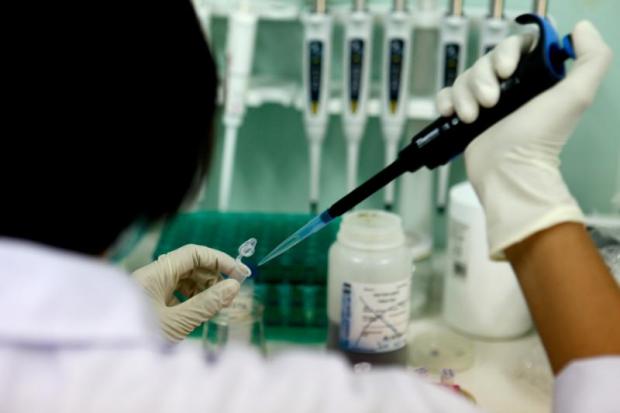 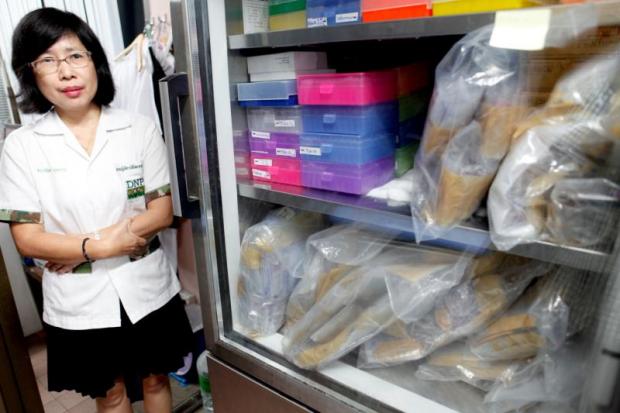 An evidence freezer in the wildlife forensic lab. Karnjana Karnjanatawe

Tangled up in blue