To mark the 130th anniversary of relations between Thailand and Japan, a Japanese man shares his impressions of a life spent in both countries

After spending four of his teen years in Bangkok which imprinted a love for the city's vibrancy, Naoki Hatta fell out of love with Thailand after its charm was lost along the way of urban development.

"I was so shocked to see young boys selling various items at traffic lights," he said of his early years in Thailand. "Whenever the cars stopped, these children were desperately selling windscreen wipers, flower garlands, newspapers and so forth. Most of them were younger than me. I felt so bad, especially when I was sitting in an air-conditioned car. At that time, Bangkok was so poor," recalled the native of Nishinomiya who graduated from the International School of Bangkok.

His trip back to the country in 2016, when he visited the northeastern province of Khon Kaen, revitalised his desire to reconnect with Thailand and its culture, with the ultimate goal of having his family settle in Thailand and to follow his parents' footsteps working on social contribution projects.

Hatta is one example of the Japanese who have strong individual ties with the Land of Smiles. He first came to Thailand in 1977 when he was only 14. Four decades have passed but his memories are still vivid, especially this year when Thailand and Japan celebrated 130 years of diplomatic relations. 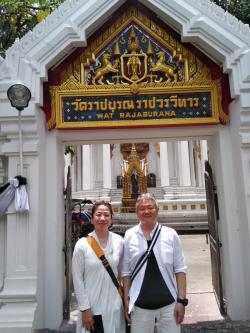 With his wife at Wat Ratburana Bangkok.

Forty years ago when he first arrived in Thailand, Thai people seemed to think that all Japanese were wealthy, Hatta recounted. He heard almost every day of crimes against Japanese visitors. He himself had watches stolen by air conditioner repairmen, was cheated by taxi drivers and was billed unreasonably at restaurants.

"Looking back at the past, I feel these experiences improved my crisis management ability and helped learn a way of self-protection. I feel that it was a valuable experience in my life," said the now 53-year-old.

But there were opposite stories too when foreign tourists, including those from Japan, took advantage of Thai people, Hatta said, such as when they came to Bangkok to buy women. He regards such behaviour as shameful.

"I dislike these behaviours very much. As a Japanese, I am ashamed and sorry. I would like these Japanese to see and experience other better and more interesting things in Thailand."

He returned to Thailand again long after that and was surprised to see tremendous changes in the capital city -- many high-rise buildings, clean eating and drinking places and beauty salons. Old soi roads were surfaced by asphalt.

"It was not the Bangkok that I knew from the past. I felt very sorry that the Bangkok I had liked was gone," he said.

The turning point came when Hatta visited Khon Kaen with his sister in July 2016 to see his mother's volunteer activities to support a movable library project and improve the livelihood of children in the Northeast. His father was an official from the Japan International Cooperation Agency who had worked on agriculture development in Thailand. The couple had lived in Thailand for 15 years and carried out many charitable projects. 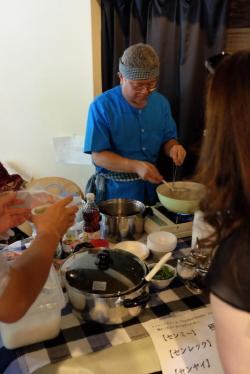 Naoki Hatta demonstrating how to cook Thai food at his wedding reception in Japan in July.

"I met a lot of people who thanked my mum and still talked highly of her. They provided a great deal of hospitality and warm-hearted feelings and made us feel at home. I could feel the 'caring and kindness to people' attitude from these people, the same as I felt before. This trip changed my perception. I was thinking of looking for a job related to Thailand."

Hatta decided to learn Thai, which he actually spoke a little during his school days in Bangkok. His private teacher was a 29-year-old young man who enabled him to learn about Thailand and they became friends. Hatta is now the "Japanese father" to his former language tutor. "Being friends with the young generation of Thais like him is one of the reasons why I fell in love with Bangkok again," he said. "As I learn how to speak Thai, I feel attached to Thailand and Thai people so much."

A recent heartwarming experience occurred in Bangkok when he and his wife visited Wat Arun in April and wanted to get some incense sticks. He asked a woman who said that the shop was too far away, and so she gave him hers.

"I felt very grateful that people in Bangkok are so kind and caring," he said. Hatta later married his old school sweetheart Mina Hatta, whom he met at the Japanese Junior High School in Bangkok.

And just like many other foreigners, Hatta is madly in love with Thai cuisine. When he was in Japan, he cooked Thai food twice a month, using imported ingredients he bought from Osaka, trying to recreate authentic flavours.

"Whenever I visit Thailand, I definitely go to a street stall to eat bami nam and bami haeng [egg noodles with soup and without soup]. Eating Thai food in Japan is very expensive and tastes seem to be modified for the Japanese. Although we have many Thai restaurants in Japan, I still think Thai food in Thailand is the best of all."

Hatta hopes that once he settles in Thailand, he can contribute to a mission just like his parents. At the same time, he wishes he could introduce the greatness of Thailand and Thais to people back in his home country.

"I feel more relaxed and at home sometimes in Thailand than I do in Japan. I would like to show Thailand's good places and culture to the young generation of Thais as well as the Japanese, and to contribute to cherishing the country's heritage."