For the first time in over a century, the lost art of Hun Luang will be performed, at the royal funeral of King Bhumibol

At first glance, the puppets look like nothing more than wooden dolls. They wear the costume of traditional khon performances, their curved fingers capped by long, brass fingernails. When a puppeteer pulls strings -- neither from above or from inside its clothes, but underneath -- the puppets come to life and perform classical dance moves almost like a human.

The puppets are called Hun Luang (Royal Puppets) or Hun Yai (Big Puppets). Lost and unseen for 150 years, the ancient art was revived by the Fine Arts Department last year, and will be one of the highlights of the performances at the royal cremation of King Rama IX on Oct 26.

"The last time Hun Luang had a performance was for the royal funeral of King Rama IV [in 1868]. This will be a once-in-a-lifetime chance for the public to see the show at the royal funeral later this month," said Pairoj Thongkumsuk, 57, a music and drama scholar at the Office of Performing Arts of the Fine Arts Department. He is one of four Hun Luang puppeteers who will pull the strings at the historic event.

The history of Hun Luang dates back to the Ayutthaya period. The elaborately built puppets were once used to perform khon -- masked dance drawn from episodes of Ramakien-- in the royal court and for special occasions, such as the birthdays of kings, royal weddings or court funerals. 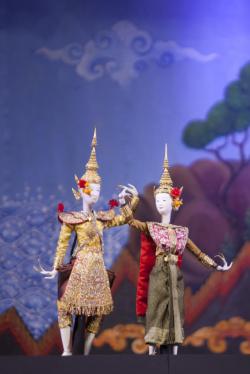 The puppets are made of wood, their startling flexibility coming from the mechanism enabling each of the puppets' joints to move freely -- from neck, shoulders, elbows, wrists, hip and knees -- through the control of 20 strings. Each stands about 1m tall and weighs around 3kg, sometimes 5kg with the costume.

Pairoj said that Hun Luang represents the beginning of the puppet tradition in the Kingdom; it came before the creation of Hun Wang Na (with a design similar to that of Hun Luang, but at about a third of the size), the more popular Hun Krabok (Bamboo-Rod Puppets) and a 1m-tall Hun Lakhon Lek (of the Joe Louis troupe).

"We have more than one original Hun Luang, believed to have been created during the early Rattanakosin era, displayed in the National Museum. But no one knew how to use it, or how it was designed -- the knowledge disappeared for a long time," he said.

The discovery of this lost national heritage was like something out of a movie.

It began with Kamol Kankitcharoen, who was then a student at Phetchaburi Rajabhat University. A history buff, Kamol had been trying to learn more about Hun Luang but couldn't find any books or artists who could share knowledge of the lost art with him.

In despair, he prayed for a miracle in front of the Buddha at Wat Mahathat Worawihan in Phetchaburi. He claims that something very strange then happened to him. 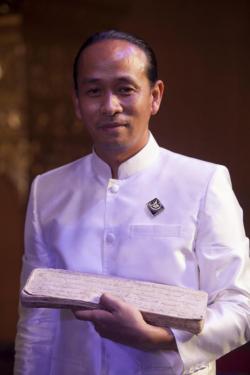 "While walking from Wat Mahathat to Wat Phabphlachai, a madman on the street approached and asked me for a meal. When I gave food to him, he handed me a manuscript and said, 'I gave it to you'," said Kamol, now 40 and a teacher in Nakhon Pathom.

He didn't know what the book was, so he brought it back to Wat Phriang, where he lived. Four senior monks at the temple started deciphering the manuscript, which was written in ancient Khmer with faded characters and drawings. It also stated the year: 1858.

"We recovered about 10% of the content of the manuscript when the dawn broke. Surprisingly, the remaining pages turned blank in the morning," he said. His story was like a fantasy tale and no one believed that he had found the manual on Hun Luang.

Kamol wanted to prove his tale by setting out to create a puppet according to the techniques detailed in the book. In 1999, he began devoting his time to the project, and a year later he finished a big puppet controlled by 20 strings. He could make the arms, hands and legs move, but he didn't know how to make it dance.

The puppet was displayed in his classroom for his students to play with, until one day a mother of one of his students, who happened to work for the Fine Arts Department, saw the puppet and raised the issue with her senior.

Kamol was invited to the Fine Arts Department in Bangkok to show the model. Largely because of him, the department launched a project to preserve the old wisdom of Hun Luang last year. Kamol was asked to teach artisans of the Office of Traditional Arts to make big puppets.

"I was glad that the wisdom will live on," said Kamol. 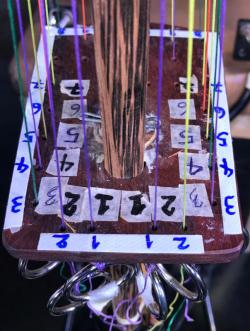 Teaming up with the craftsmen at the Fine Arts Department, Kamol chose to make four puppets according to the four principle characters of the Ramakien epic: the phra (or male lead), the nang (the female lead), Hanuman (the Monkey God) and yaksa (the demon). The episode they intended to perform tells the story of the fourth wife of Hanuman, known as Nang Warin.

"We selected an amusing chapter of the epic when the project was launched last year, because we expected to entertain an audience of the royal court. No one would have been able to foresee that we would take part in the show for the royal funeral," said Kamol, adding that he was proud and sad to serve the late king one last time.

To control Hun Luang, four classical dance masters were selected for the task, including one woman. In the past, the puppeteers were chamberlains because the weight of each puppet required considerable strength. The performance for the royal funeral of King Bhumibol Adulyadej will be the first time that a big puppet will be controlled by a woman.

Unchalika Morsingha, 43, said she had to practise how to synchronise her 10 fingers to each movement of the puppet for a whole month. A senior performer of classical dance at the Office of Performing Arts, Unchalika recently demonstrated the subtle art of making her body as one with the puppet of Nang Warin, the female character in the story. Stretching her arms and placing her hands next to stainless steel rings attached to 20 threads -- 10 for the right-side movement, 10 for the left side -- she hummed the melody and moved with the rhythm of the music, her feet shuffling as she danced and made the puppet above her head dance with her. Her 10 fingers moved quickly from one ring to another, or to more rings to pull those ropes and release them without bothering to see the positions. "I have to be completely at one with the puppet in order to make the dance smooth," she said.

As a traditional dance performer for more than 20 years, she knows by heart how to move her legs and her hands according to a song. She even asked Kamol, the puppet designer, to add some threads to control more movements of the legs and feet. She also made the dress for the puppet and knows how to fix the rope when it is torn.

After she mastered the movement of the puppet, she practised it with a song. The song is composed specially for the Hun Luang show. It is because the puppet needs extra time to make one move. Each movement is slower than any slow classical dance song by one chord.

The team of puppet masters spent about a week practising the dance with songs.

"The first time I controlled the puppet to dance according to the song, I was very excited. During the past seven days, we practised very hard. So every time I hear the song, my fingers seem to move automatically to control each rope of the puppet. When I look at the puppet, I feel as if it was me who was dancing," she said.

After the royal funeral, the Fine Arts Department will produce more Hun Luang to perform in a full show. The ultimate goal is to bring back the glory of Hun Luang, like the time during the early Rattanakosin period when there were more than 100 puppets for a single show.

"I never thought I would have a chance to perform Hun Luang," said khon performer and Hun Luang puppet master Koerkchai Yaiying, 34, who controls the Monkey God puppet.

"Although I felt deepest grief, I am proud that I have the honour to perform the show for our late king. The performance will show the beauty of a long-lost cultural heritage that we want to preserve for the glory of the land."

The Hun Luang performance will be an open act of the second stage of the royal funeral on Oct 26 in Sanam Luang. It will start around 6pm, with a 20-minute show before Hun Krabok and four other classical dances.

There will be three stages hosting more than 10 classical performances, excluding the khon mask performance in front of the royal crematorium. The total number of performers will reach 3,000.

* The third venue will be a concert stage for songs and music composed by King Rama IX, as well as songs composed in tribute to the king.

The performances of all three stages are scheduled to start at the same time, at 6pm, and will stop during the royal funeral ceremony. It is expected to continue until 6am the next day.

The rehearsal will be organised on Oct 21.