Scholars discuss the issue of LGBTI acceptance and gender identity in the predominantly Muslim deep South, where tradition, religion and the restive situation influence people's lifestyle and belief

A man with short hair -- wearing a sarong around his chest the way a woman would -- is seen frolicking alone happily on a crowded beach. Lost in his own world, he seems unfazed by the scrutiny and strange looks from children, women in hijab, and men in skullcap. In the background, the sound of Islamic prayers can be heard.

After a long prance, the man stops for a moment of contemplation. Then, he walks into the water and never resurfaces.

This portrait of isolation is from Neverland, a short film by the Salam Soray team shown earlier this month at Tentacles Gallery on Sathon Road. It is a reflection on the life of a pondan (a Malay term meaning katoey, and is generally used to refer to both homosexual and transgender) in the three southernmost provinces of Thailand, a predominantly Islamic region that's also plagued with waves of insurgency. The short film on show was shot at Talo Kapo beach in Pattani during the Islamic Eid festival.

The situation for LGBTI (lesbian, gay, bisexual, transgender, intersex) Muslims living in the Deep South can be described as complicated, even more so than for those living in other areas due to certain conditions unique to the place, according to scholars in the region. In the Muslim-majority Deep South, Islam as well as the traditional Malay culture have a strong influence on people's lifestyle, belief and behaviour. And with homosexuality sometimes viewed as unacceptable -- though not always, and not always openly -- the issue of sexual orientation and gender identity becomes at once an intense debate even as it's sometimes swept under the rug. Many people also feel gender issue shouldn't even be discussed in the region of ongoing armed conflict, as it would do nothing but add to the already problematic situation.

Muslim culture and belief affect the lives of LGBTI in different dimensions -- how they're supposed to dress, the process of coming out, their place within the religious setting, and their marriage situation. The level of tolerance toward LGBTI varies from one family and community to another. And it also depends on the family's social status, the attitude of local religious leaders, the setting of a community and more.

Regardless of a person's gender identity, everyone is expected to dress according to their designated sex at birth, especially when attending formal religious events or when they go to masjids. The religious space remains quite open to them, but with conditions. 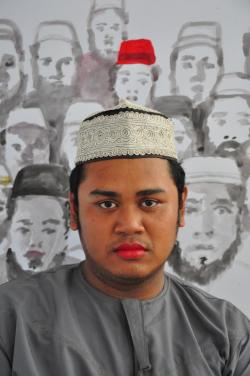 Parts of a photography project that Samak worked on this year to reflect the queerness within Muslim culture. Photos courtesy of Samak Kosem

"People still believe in this idea of 'curing' homosexuality," said Anticha Sangchai, lecturer at the Department of Philosophy and Religion, Faculty of Humanities and Social Sciences at Prince of Songkla University.

"In opening up a religious space to LGBTI, people do so in the hopes that an exposure to religion would be able to fix a person. And when there's a katoey who decides to convert back to being a supposedly straight man, he would be praised by religious leaders and the public."

For local LGBTI to come out at all, Anticha said it comes down to how safe they feel when with their family.

"Those who decide to come out often tell us that they have at least one or more person in the family supporting them. Because if the family is not open, it's just difficult to come out within the social context of the Deep South. Some of their very close friends may know, but never the public," explained the academic, who is also a vice-chair of Amnesty International Thailand.

Anticha has been living and working in Pattani province of the Deep South for over a decade. She co-founded Buku Classroom and Buku Football Club, which aim to create a safe space for the locals to exchange dialogue on sexuality and gender. This includes anything from the roles of women and men to social structure, rights, reproductive health, safe sex, and of course gender diversity.

Earlier this year, following a TV programme that features her sexuality classroom, several religious academics accused Anticha of preaching homosexuality to young Muslims. Many people also expressed discontent toward her female football club, which saw women in hijab kicking a ball in a field together.

Another issue faced by southern Muslim LGBTI is forced marriage. As people are encouraged to marry since young (even when still students), some parents hold a strong expectation for their children's marriages. Normally, they clash with their unwilling children -- both straight and LGBTI.

"There are many gay men being forced to get married to women. Many end up doing so, with some believing that a heterosexual marriage would be able to cure homosexuality. It seems to work out for some -- to be married with kids -- though we never know what goes on in their private life," said Anticha.

Samak Kosem -- a researcher who is part of the Salam Soray team that made the short film Neverland -- added that many gay men eventually yield to pressure from their family. The wives may actually know they're gay, in which case the couple may agree to have sex one time for the woman to get pregnant just to fulfil society's expectations.

But in other cases, LGBTI people may deny the marriage outright, and end up trying to leave their own home.

"They feel that there is no space for them to exist just as they are," said Samak, also a chief editor at Third Space Publishing.

"Those who move away are seeking a way out for themselves. But there are some who are faced with insults or some form of violence. So, in their case, it's not just about leaving the area, but leaving Islam altogether."

From his experience shooting Neverland right in the heart of the Deep South, Samak recalled seeing women laughing and some men glaring at the team's queer shoot. Still, nobody approached them or tried to reprimand the crew. He felt the day served as quite a reflection on the life of pondan, that they are still perceived as a joke, an object of mockery.

THE UNWILLINGNESS TO TALK

Samak recently published an article in the Thammasat Journal Of History entitled "Pondan Under The Pondok: Reflexive Ethnography Of 'Queer Muslim' And Childhood Memories In The Religious School". The article explores the brotherhood, "bromance", and sexual encounters of teenage Muslim boys living within the pondok (a religious school that segregates boys and girls) through Samak's own childhood experiences.

In his article, Samak talks of how some boys engage in homosexual acts with one another, as a way to satisfy their own sexual desire in an all-male setting of the pondok. Some boys interpret that as it being acceptable to engage in sexual acts with men -- perceived as just a "play" between boys -- rather than to have premarital sex with women, as that is against Islamic teachings.

At the conclusion of his article, Samak points out the lack of space and willingness of most Muslim academics to discuss the issue of homosexuality from other points of view, not just condemning it.

"To publicly discuss the issue of gender within the southern Muslim community can be difficult, as people would feel you're trying to counteract the argument with liberalism," said Samak, adding that some people still have issues with feminism and gender equality. The LGBTI issue is another step beyond that.

With people denying a space for discussion on gender -- which inadvertently excludes and dehumanises LGBTI even further -- Samak feels it poses a negative effect on both Islam and Muslims themselves, as they fail to address the changes in an ever-evolving society. For example, in the cases where boys are having sex right in the pondok, people don't know how to handle it, as the issue is never discussed formally and publicly. People try to explain the occurrences according to religious principles alone, and no solution is found for the matter.

Samak put the situation in the Deep South in comparison to Muslim-majority Indonesia. Despite being the most populated Islamic country in the world, at least Indonesians still open up a space for people to discuss and debate different social issues, anything from rape culture to outdated religious textbooks. Open discussion then leads to the issue being acknowledged for people to work out a solution from it.

"But in Thailand, the Muslim community cares very much about its image," said Samak. "So people tend not to talk about problems in society, as that could make them look bad. It's quite understandable. But, at the same time, it shouldn't be about sweeping all the problems under the carpet and just letting them escalate."

Samak is currently working on a thesis to explore the lives of queer Muslims living in the Deep South, in the context of Islamic fundamentalism not being open to those who are non-heterosexual. He plans to choose the subject of his study from among Islamic preachers, students in the pondok, as well as gay Muslims who are married to women.

From Samak's intention to understand deeply the queerness that exists within Thai-Muslim society, his study will surely bring about discussion and debate, which hopefully will see more people open to the conversation on gender within Islam. 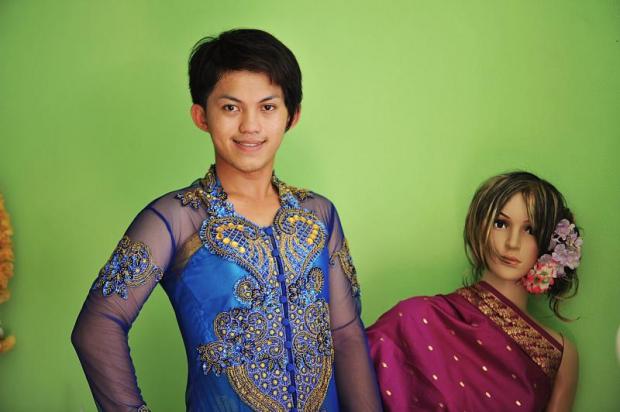 Parts of a photography project that Samak worked on this year to reflect the queerness within Muslim culture. Photos courtesy of Samak Kosem 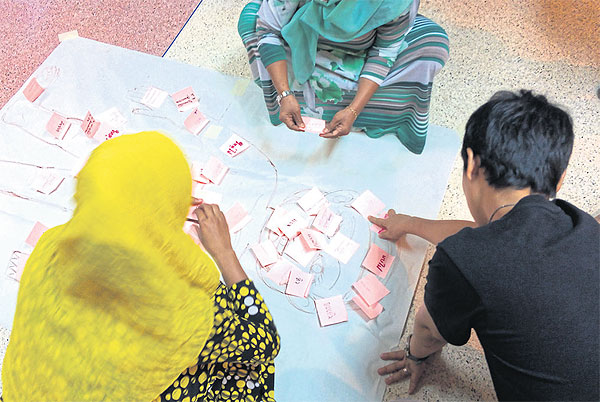 An activity done inside Buku Classroom.