Jay Fai usually opens her shop around 3pm. But these days, no matter how early you get to Mahachai Road, it's likely you'll find a commotion and a line of people waiting for a seat. Plastic chairs have been put out on the footpath, but an army of cameras and phone-toting would-be customers still stand in front of the kitchen and reservation tables, hoping to catch a glimpse of the "omelette queen" herself. 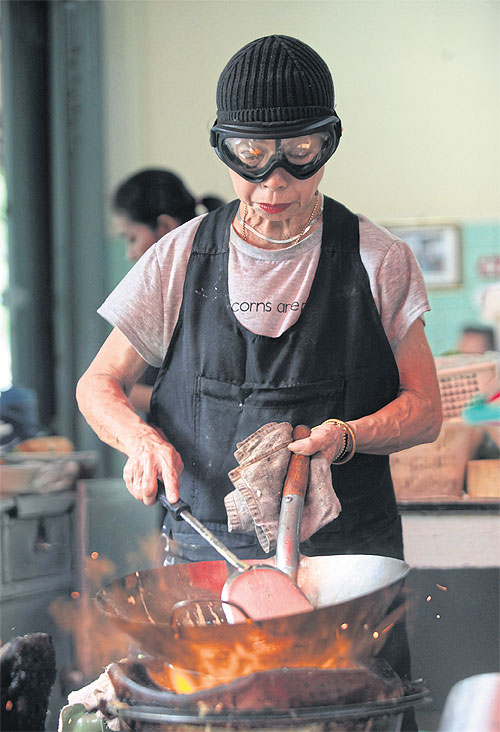 Jay Fai, or Supinya Junsuta, wearing goggles as she cooks. In the 1990s, a Bangkok Post food critic dubbed her the 'Mozart of the Noodle Pan'. Photos: Jetjaras Na Ranong

A week after the unveiling of Michelin Guide Thailand, this old-town eatery, which was the only street-side venue to be awarded one star, continues to attract a diverse crowd: foodies, bloggers, curious onlookers, self-appointed critics. And now, add the officials from the Revenue Department to the list.

In the small alley adjacent to the restaurant, a square table has been laid out, where black-clad officials are discussing pricing and revenues with Jay Fai's husband over cold drinks.

"It's because of all the media attention," the old, bespectacled man says. "Suddenly, the Revenue Department became interested in who we are and how much we make," he adds with slight anxiety.

Jay Fai, 72-year-old cook whose real name is Supinya Junsuta, is in her usual position, cooking behind wooden screens that shield her from the crowd. Her goggles on her face -- a familiar sight -- she seems unhappy about this turn of events.

"Perhaps I should hire those tax people to handle the cash register," she cries out.

"Years and years, I've been struggling to keep this business afloat. Now that we've been singled out and interviewed by journalists, they're coming at us."

Still, Jay Fai has little time to be preoccupied by these matters, as she cooks alone for a growing number of customers, some of whom have been waiting for over an hour.

The cook -- in the 1990s the Bangkok Post's late food critic Ung Aang Talay extolled her as the "Mozart of the Noodle Pan" -- is just as interesting as her cuisine. Petite, her head covered in a balaclava, and donning ski glasses to protect herself from the scalding oil, she shows unyielding energy, preparing one crab omelette after the other. 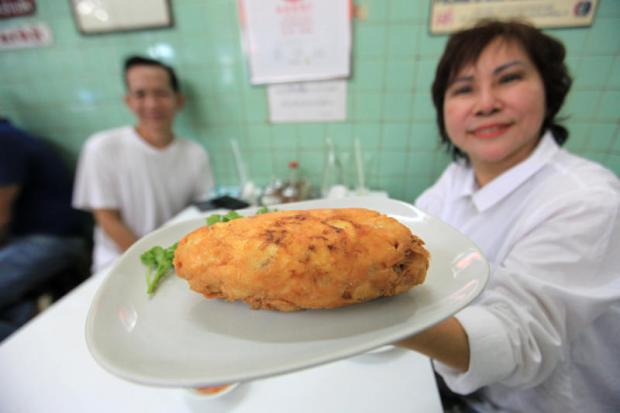 How does the sole street-food cook to be awarded a Michelin star in Bangkok feel, a week after this announcement?

"Oh, I wish I could give the star back already," she replies, her arms and hands moving swiftly from one giant pan to another.

In her youth, Jay Fai took over her father's business, which he started nearly 70 years ago.

But in recent years, as the economy declined, few customers walked into her high-priced shop.

As a result, she was often seen napping in the afternoon, her head resting on the table -- the same table which never seems to be empty at the moment. Today, she hardly has time to breathe.

"She seems fine right now, but in the evenings, she slows down as she gets easily tired," Jay Fai's daughter Varisa Junsuta explains.

Her famed dishes are prepared using ingredients that could easily find their way into the kitchens of fine dining restaurants.

A single dish with abalone could easily end up costing you 10,000 baht, but most of her customers come for her signature crab omelette (800 baht) or seafood rad naa noodles (400 baht).

Since being awarded a Michelin star, Jay Fai hasn't raised her prices but she has stopped offering several fried dishes that used to be on the menu.

"They take too long to prepare and with the number of customers we have daily, it's impossible to keep up," her daughter adds. 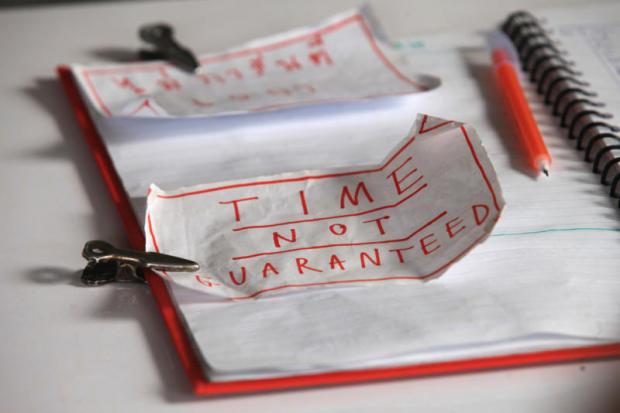 Currently, it seems as though every single person in the room has a crab omelette in front of them.

"The ingredients are so fresh and Jay Fai herself is so generous that it's really worth the price," says Mon, one of the seated customers, showing off the dishes laid out in front of her.

A chef herself, with a restaurant in San Francisco, Mon would often stop by to eat rad naa noodles at Jay Fai's whenever she was in Bangkok.

"A few years ago, that was their signature dish, but I'm happy to taste new ones."

Jay Fai's cuisine may be worth the price, but is it worth the wait? Diners who come must be armed with patience, as they jot their names and telephone numbers down on the register, next to which a sign is placed: "Time not guaranteed."

Jumpol, an old customer at Jay Fai's, enquires about availability but waves sadly, saying he won't be waiting.

"I used to come often for Jay Fai's noodles. I'm really happy for her success. But the queue is too long," he adds before leaving.

Tourists and foreign visitors abound too. A self-described foodie, Californian W.B Coyle says he has been waiting for a table for nearly two hours.

The success is such that Jay Fai's family members -- sister, husband, daughters -- are scurrying around the one-room restaurant to meet the needs of each and every customer.

"Next year, my sister will leave her job to come and help us," Varisa says.

"The triumph has been great so far, but at the end of the day, we just want to continue selling food like before."

For video of the story, go to bangkokpost.com/vdo For e-paper readers, visit goo.gl/NdGjz5 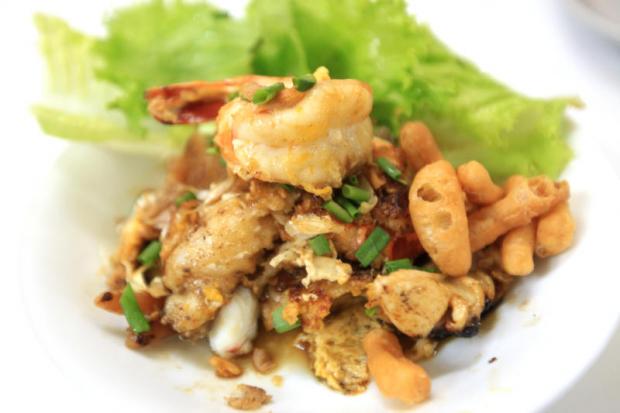 Seafood dishes, such as these fried noodles, are the stars of the restaurant. Jetjaras Na Ranong