The summer madness that bites

As heat rises and concern about rabies grows, we offer some corrections to the myths and misconceptions of this summer's most feared disease

published : 14 Mar 2018 at 04:00
newspaper section: Life
writer: Arusa Pisuthipan
Stray dogs are responsible for almost half of rabies-transmission cases, according to a 2017 examination carried out by the Department of Livestock Development. Photo: Wichan Charoenkiatpakul

Thailand has become a bundle of nerves in recent weeks after reports on rising rabies cases and the latest announcement of 22 provinces as epidemic red zones. As of now, the Department of Livestock Development has reported four deaths.

The spread of the fatal disease eventually came closer to the capital when the Department of Livestock Development yesterday also flagged Bangkok as an epidemic zone whereas 26 provinces were declared "temporary epidemic zones", which means rabies cases are being monitored in these areas.

Although rabies is prevalent mostly in tropical areas, there are many misunderstandings regarding the infectious disease, particularly the belief that a vaccine is required only after a dog bite, never before.

So Life talked to a tropical-medicine specialist, clarifying the rabies-related confusion by presenting him with some persistent misconceptions regarding this deadly virus. 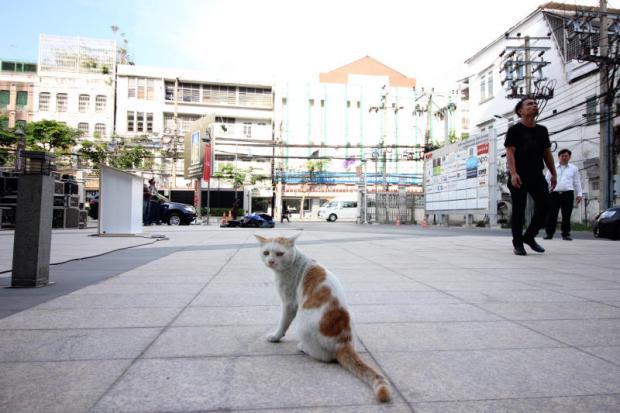 Cats also spread rabies, but not as frequently as dogs or cattle. Photo: Melalin Mahavongtrakul

Is the rabies situation in Thailand this year way more serious than in the past?

Rabies, a viral disease, has been around in Thailand for quite some time. In the 1990s before public awareness was raised, rabies killed up to 300 Thais per year. Figures from the Bureau of Epidemiology saw the highest number of rabies-related deaths in 1980 -- 370 cases.

Since 2007, public health authorities have created awareness and understanding with regard to the disease, until the death rate plunged to less than 10. In 2016, however, the death rate rose to 14 per year -- which was the highest in eight years. Last year, the Bureau of Epidemiology reported 11 deaths.

"It's about time to question if Thais truly realise that rabies infection is detrimental," said Dr Wasin. "What we have learned from last year's 11 deaths was that of all cases, 100% were from viruses transmitted through dogs. More importantly, of all 11 deaths last year, nine of the victims were not aware of the importance of wound cleansing and of rabies infection itself, and thus did not visit a doctor.

"When we fall short in awareness, we can more easily fall prey to the disease." 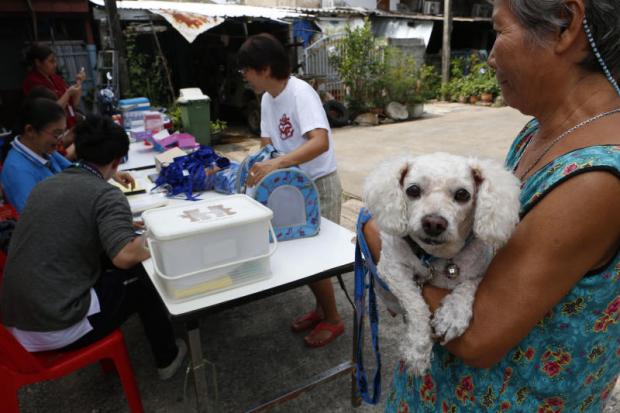 Is rabies transmitted only via dog bites?

Dogs are not the only rabies carriers. According to rabies examinations carried out by the Department of Livestock Development in 2017, 88% of rabies cases in Thailand were transmitted through dogs, followed by cattle (6%) and cats (5%).

The same report revealed that almost half of dogs that transmitted rabies were stray, 36% were pets, while 18% were those with no clear ownership status. Almost 100% of the studied dogs had no clear rabies vaccination history or had never been vaccinated against rabies at all. Only some were reported to have had a rabies shot, with no known specific vaccination period.

According to data from the World Health Organization (WHO), rabies occurs on all continents except Antarctica, and causes tens of thousands of deaths every year, mainly in Asia and Africa. The virus spreads from rabid animals to humans through bites or scratches, usually via saliva.

Are pet animals at risk of transmitting rabies?

"It depends on whether or not our pet animals are vaccinated," said Dr Wasin. "But again, nothing can be guaranteed. Rabies cases have been reported to be transmittable through domesticated dogs and cats, too, unless owners are totally positive that their pet animals are locked up in a place where they are not in contact with animals outside. If pet dogs and cats are regularly vaccinated, the risk is low. Getting pet dogs and cats proper vaccination is fixing the problem at its root."

However, Dr Wasin added, there is data stating that vaccinated dogs could also be found to carry the rabies virus, so people, after being bitten by suspicious dogs, should by all means visit a doctor for vaccination.

Does rabies cause a fear of water?

Most rabies cases, explained the specialist, are of a furious strain whose symptoms include hyperactivity and aggression. The average incubation period is three weeks to three months, but academic reports showed incubation periods as brief as four days.

The virus is transported to the central nervous system, which affects the autonomic and sensory nervous system, where patients will develop fever, rapid heart rate, restlessness and heavy sweating, as well as difficulty breathing and swallowing.

"And because the nervous system is stimulated, patients will develop hypersensitivity to wind and water. They will feel pain once they are exposed to even, for example, wind generated from an electric fan or when swallowing water. Taking a shower also causes pain. That explains why the illness is associated with hydrophobia."

Rabies is fatal once people bitten by carriers start to show clinical symptoms. "Once it is diagnosed, it cannot be cured."

Are rabies shots still given through the navel?

Given the fact that the rabies' incubation period can vary from four to 90 days, it is highly advisable that people visit a doctor to get the serum and vaccines after dog bites or scratches. Prior to a hospital visit, the protocol is to clean the wound with soap at home as soon as possible and rinse it with running water for 10-15 minutes at least. This is to reduce the virus in the affected area.

When in the hands of a doctor, people who are previously unvaccinated against rabies will first be given a serum or immunoglobulin right around the wound to prevent the virus from proliferating, subsequently reducing the risk of infection. Vaccines will be administered thereafter, with full immunisation comprised of five shots to be given on scheduled dates.

"Vaccines against rabies are very well developed. Doctors do not give them through the navel anymore. Today, rabies vaccines are injected both through intramuscular and intradermal routes, and it takes at least 10-14 days for the body's immunity to boost. That's why we also need a serum which serves as an instant immunity, immediately taking effect while we wait for the vaccine to function," said Dr Wasin, adding that the serum is a one-off shot. The amount of serum to be given to each person is calculated based on body weight.

According to the WHO, the treatment protocol for rabies cases depends on the severity of the wound. For Category I, which involves touching animals and animals licking the skin, a serum and vaccination is not required. For Category II, which means the nibbling of uncovered skin, or minor scratches and abrasions without bleeding, immediate vaccination is advised. For the most serious type, Category III, which includes bites and scratches through the skin, licks on broken skin, and contamination of the mucous membrane with saliva from licks, immediate vaccination and the administration of a rabies immunoglobulin is a must.

Is there a pre-bite vaccine for rabies?

Rabies vaccination to be given before bites or scratches or pre-exposure immunisation is very highly recommended, said Dr Wasin, especially for those living in high-risk zones or travellers heading to areas where access to vaccines can be difficult.

"Pre-exposure immunisation is comprised of three doses, to be given on days 0, 7, and 21 or 28. The good thing is that after you have these three shots and are bitten by a dog, you do not need an immunoglobulin, because you are already immune. But you still need to get a vaccine booster on the day you are wounded, and on day three."

According to Dr Wasin, the effect of the pre-exposure vaccine against rabies can cover up to 20 years. An average of 10 years and a minimum of five have been observed by the WHO and other independent research bodies. Rabies vaccines are available in almost all hospitals. At the Faculty of Tropical Medicine, Mahidol University, a rabies shot costs around 400 baht. A full pre-bite immunisation, therefore, costs around 1,200 baht.

What should one do with dogs and cats suspected of carrying the rabies virus?

Rabies-infected animals will become more aggressive too. So if people are bitten by those animals, get treatments and keep the biting animals under 10 days' observation. People can report suspicious animals at the Department of Livestock Development or the Department of Disease Control.

"There is no need to panic," concluded Dr Wasin. "Most crucial is that people need to be aware if they are at risk. Of course, the risk level is unknown, but what we know now is that we are in an endemic area for rabies infection and there are vaccines for rabies prevention. Now you can make an informed decision."