Corporation with a conscience

B.Grimm continues its long-standing involvement in local social causes with an exhibition in support of the BACC

Letters and postcards dating back to the 1880s adorn the walls of the Bangkok Art and Culture Centre, ordered in a chronological pathway leading to an exhibition by 15 contemporary Thai artists.

The past and the present are two facets highlighted in this show celebrating the 140th anniversary of B.Grimm, a multinational conglomerate whose history is closely tied to that of Thailand's development in the modern age. On Sunday, HRH Princess Maha Chakri Sirindhorn presided over the opening of "In The Kingdom, 140th Anniversary of B.Grimm", which also traces the history of Thailand-Germany relations over the years through postal materials, from stamps to correspondence to private letters.

The oldest surviving letter, addressed to B.Grimm co-founder Erwin Mueller, may have been sent from Berlin to Thailand in 1889, but the company -- then a small dispensary -- had already been established in the kingdom for 12 years.

The Siam Dispensary -- Thailand's first German pharmacy -- opened on Charoen Krung Road during King Rama V's reign. The postal history exhibition -- the first of its kind to be held at the BACC -- reveals the ties between Mueller and Bernhard Grimm, and the Thai aristocratic elite.

The pharmacy soon received royal acknowledgment for its high-quality medicine and was granted the title Royal Pharmacy of the Royal Court in 1879.

As business prospered, the duo and their successor Adolf Link -- grandfather of B. Grimm's current CEO Harald Link -- evidently helped foster, as well as rekindle, relations between Thailand and Germany throughout the first half of the 20th century, an era of volatile global politics and wars that didn't leave B.Grimm unscathed.

When King Rama VI announced Thailand's participation in World War I alongside the Allied powers, Germans were declared "enemies of the state", and companies such as B.Grimm saw their possessions seized. During World War II, the family members were placed under house arrest.

Nonetheless, since its establishment B.Grimm had grown from a mere pharmacy to a leader in the import of construction goods, and played a key role in introducing modern infrastructure telecommunications to Thailand. It contributed to the construction of the Kingdom's first irrigation project, the Rangsit Canal in central Thailand.

"B.Grimm has always tried to make a difference in Thai society," Harald Link said in regards to the conglomerate's positive drive and influence in the country. Link, who speaks fluent Thai and holds Thai citizenship, added that Thai society had always paid his family back with great generosity and kindness.

The fourth generation of B.Grimm's business operators, Link is now heading an enterprise with over 2,000 employees involved in diverse sectors, including real estate, transport and healthcare as well as emerging digital technologies. Still, the firm's motto, "Doing Business With Compassion", is a major component of Link's work ethic and direction. As a philanthropist, he continued his family's efforts in supporting causes few people cared about.

Over the years, he has assisted charities for children's education and environmental safeguards, among others, but also made substantial financial contributions to the arts in Thailand.

"I love art," Link said, adding that he started by collecting traditional Thai benjarong ceramics and objects related to B.Grimm's history, which he hunted down in auction houses.

A supporter of the Bangkok Symphony Orchestra, Link is now championing the BACC as well, at a time when the arts centre is under threat. Recent debates among Bangkok Metropolitan Administration officials regarding the BACC's future have further highlighted the urgent need for private sponsorship.

According to Chatvichai Promadhattavedi, the BACC Foundation's committee secretary, B.Grimm has already donated 1 million baht to support the art centre, on top of commissioning 15 leading Thai contemporary artists to create new works reflecting the company's social initiatives, as well as other social and environmental issues in Thailand.

The artists were invited to research B.Grimm's history, as well as their social programmes for the environment and the improvement of Thai society, and to comment on its philosophy of "doing business with compassion".

"The BACC is a platform for exchanges and discussions on diverse social and artistic topics," said Chatvichai.

"B.Grimm's work targets several issues, ranging from the protection of wildlife to cultural organisations. Therefore, a collaboration between the BACC and B.Grimm is bound to be fruitful."

Furthermore, the topics the artists were invited to reflect on are universal and provide food for thought. "It's about the successes of Thai society, but also its hardships, which one must work to alleviate."

The commissioned works will be put up for sale in a charity event in support of the BACC. Revenue from the sale will go to the management of the arts centre.

The exhibition is on display at the BACC until June 20. 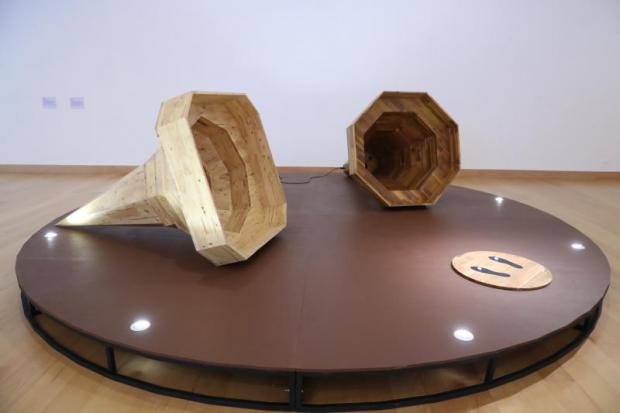 The exhibition also features contemporary artworks by Thai artists who have been asked to interpret the business philosophy of B.Grimm. Photos courtesy of B. Grimm 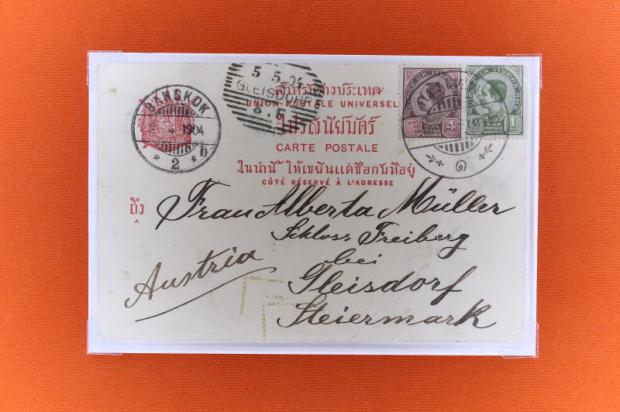 B Grimm Exhibition at BACC B Grimm 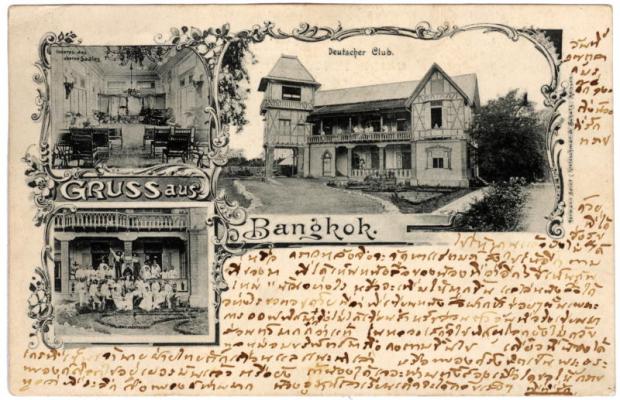 Letters and postcards dating back to the 1880s are featured in the exhibition. B Grimm