A lampshade, elegant and shiny, bears a distinct image of the Siamese constitution over the map of Thailand. A nielloware cigarette box, in solemn brass and black, also features an engraving of the constitution -- the emblematic figure of a folded scripture on a tray. Next to it are matchbox labels, pins, a glass bottle, a bowl, a water jar, an ashtray, a vinyl record. All of them carry the symbolism of the seismic transformation that took place 86 years ago.

This revolutionary bric-a-brac is evidence, according to its curators, that the mundane is historic, the quotidian momentous, and cheap, everyday objects can carry the weight of an epoch. "Khong (Khana) Ratsadon" (the English title is "Revolutionary Things") is an exhibition that opened last Sunday at Cartel Art Space to mark the 86th anniversary of June 24, 1932, the day of the Siamese Revolution that transformed the country from absolute to constitutional monarchy.

It was a historic day whose ramifications are still unfolding, the day of the birth of Thailand's democratic ideology, and later the Kingdom's first constitution. It was also the day that marked the ongoing clashes -- sometimes physical, other times political -- between the old and the new, the clashes we still witness today in society, online and elsewhere.

For Chatri Prakitnonthakan and Kittima Chareeprasit, the legacy of that monumental change remains not only in larger-than-life monuments and statues, but also more vividly and more symbolically in the small objects. For this exhibition, which runs until July 19, the two curators have scoured the length of the country, gotten in touch with antique collectors, and prowled discarded warehouses to obtain 50-plus objects made between 1932 and 1947 -- the landmark year in which Khana Ratsadon (or the People's Party, as that group of revolutionaries is known) lost much of its power and saw the rise of military dictatorship. 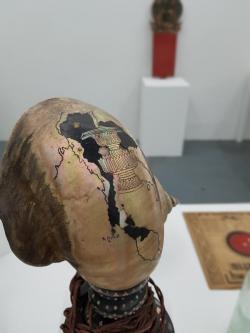 Left  A lampshade bearing an image of the constitution.

"The idea of democracy may start from a group of people in Bangkok, but these knick-knacks show that it spread around the country," said Chatri, an architecture professor at Silpakorn University who has studied Khana Ratsadon's art for over a decade. "Of course, it was state propaganda in the beginning -- and I don't mean it in a bad way. But soon people who realised that the new system could benefit them started to appreciate it and they celebrated it through the use of symbolism."

"The lamp, for instance, was made in Phuket," added Kittima, a curator and lecturer at Chiang Mai University. "The image of the constitution [which came into effect in December 1932] became trendy. It was fashionable to use it to decorate objects -- there was even a beer brand that featured it as a logo."

The largest object in the exhibition is a section of a temple pediment, a majestic wooden panel on which a statue of an angel carrying the constitution tray is attached. A tip-off led Chatri and Kittima to Wat Talingchan, a temple on the Thon Buri side, where they found the piece among a heap of discarded objects, apparently after it had been taken down and replaced.

A thammart -- or back rest used by a monk while giving sermons -- was found in Lop Buri; it too bears an image of the constitution tray. An earthen water jar is etched with the image of the constitution tray over which the Sun radiates multiple rays -- signifying light -- and it came from Thammasat University. Over at one corner is a model of a crematorium; before 1932, explained Kittima, regular citizens weren't cremated in a proper crematorium, which was reserved only for royals, but the practice was changed when Khana Ratsadon was in power.

According to Chatri, whose influential 2009 book is called Silpa-Sathapatayakam Khana Ratsadon (The Art And Architecture Of Khana Ratsadon), the revolutionaries believed in the power of art and architecture in the democratic ideal and nation-building. Structural symbolism, imagery and iconography were used to underlie its political ideas. For instance, several state buildings built in the 1930s featured six pillars, implying Khana Ratsadon's Six Pillars principle (independence, security, economic development, equality, freedom, education). The key concept that the party tried to put across to the masses, Chatri explained, is the idea of equality, and it was deployed through the modernist artistic approach, which inherently defied the old-school. 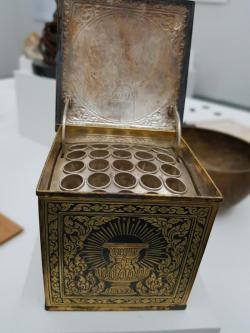 "Khana Ratsadon did away with the hierarchy of architecture, and they did it by simplifying the ornate roof decoration and jettisoning traditional Thai patterns," said Chatri. "Several buildings built in those years were symbolic, such as the six portals at Democracy Monument, or the six tiers of the roof at Wat Phrasrimahathat, when usually a temple roof has odd-numbered tiers.

"In the 1930s, the modernist movement in the West was in full swing. Khana Ratsadon adapted it into the Thai context by stressing the collapse of hierarchy and adding the symbol of the constitution."

Ironically, Chatri and Kittima noted, the "democratic" art of that period also had elements of fascist architecture: the emphasis on strength and the no-fuss façade. Also, the focus on anatomy -- the human body as a foundation for a nation's strength -- was also prominent. Khana Ratsadon's member Luang Vijitvadhakarn once lamented that the Thai folk heroes were too slender, and he promoted the realistic portrayal of the body in the Thai context.

The "Revolutionary Things" exhibition features a replica of a bas relief of a muscular woman, as well as a poster showing a topless female holding the constitution tray above her head. In a way, Kittima said, Khana Ratsadon was proto-feminist. In the 1930s, they initiated beauty contests: one to find attractive women, the other to promote working-class females who displayed strong personality.

Internal feuds, a touch of arrogance and the turbulent years of World War II brought an end to Khana Ratsadon's progressive influence in 1947, after which military strongmen and the old guard returned to power. Though students still learn about them and the 1932 Revolution, their historical importance has been minimised. After the military coup of 2006, Khana Ratsadon has returned to the political discourse as a symbol of democratic ideals -- though their ideological rival still casts them as a band of selfish power grabbers -- and the study of their artistic and architectural representations have flourished too.

In this exhibition, Kittima, who runs Waiting You Curator Lab, has created a deck of cards to be used both as a game and a summary of 52 objects and concepts introduced by Khana Ratsadon. Among the pieces displayed in the small gallery, Chatri said he greatly admired the large pediment obtained from a temple's dump because of its beauty.

But his favourite object is something much more mundane. A glass bottle used by a sweetened drink brand in the 1930s, which still bears the outline of the constitutional tray.

"It's the object that sums up what we're doing here. It's a bottle, a mass object, something that could reach everyone in the country, and it has this image of the constitution on it. That's the idea that democracy is for everyone."

"Revolutionary Things" is on view at Cartel Art Space, Narathiwas 22, until July 19. 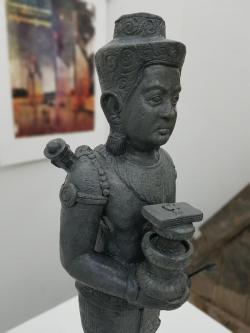 A replica of a statue in the image of Phraya Phahol Phonphayuhasena (Phot Phaholyothin), one of the leaders of Khana Ratsadon and second prime minister of Thailand. He is depicted as vaguely Chinese, carrying the constitution tray, with what looks like a smaller man slung across his back — a symbol that he's carrying other citizens with him. 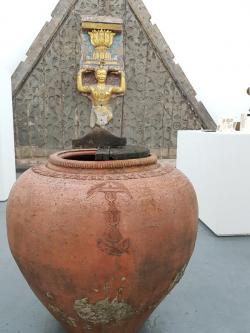 A water jar and pediment from a temple.