published : 15 Jul 2018 at 05:00
newspaper section: B Magazine
writer: Suthon Sukphisit
still on sale: Bottles of paraquat are displayed for sale at a shop in Bangkok. Authorities have restricted use of the toxic weedkiller, rather than opting for a ban. Photo: AFP

Many stories have been told about people, despairing of life, taking the herbicide paraquat as a way out.

But some people can end up injured or worse as a result of being exposed to the herbicide indirectly.

Paraquat has been widely used in Thailand for many years, and has affected the environment, farmers and consumers alike.

For example, some farmers in sugar cane farms have lost their fingers or feet after open wounds were exposed to herbicide.

Farmers usually spray paraquat in the paddy fields before planting to kill grasses and weeds, leaving the soil vulnerable to contamination with hazardous chemicals in the long run.

Studies have found the chemicals in such toxic weed-killers have spread into water sources and aquatic life. Heat of over 300 degrees Celsius is needed to break down the hazardous chemical.

However, in May, the Hazardous Substance Committee refused to uphold the ban, arguing there is no significant data or evidence to prove its toxicity.

Apart from paraquat, the committee also refused to ban the glyphosate weed killer, better known under its trade name Roundup, and the chlorpyrifos insecticide. Paraquat gets the most public attention because it amounts to 20% of all imported farm chemicals.

In 2004, a company in England developed the herbicide, which later was widely used worldwide due to its high efficiency in killing grasses and weeds.

In 2007, Sweden, Denmark, Austria and Finland have tried to ban it, but the courts objected, saying there was insufficient information to justify such a move.

However, attempts to control or ban the herbicide have been mounted successfully in many countries, including the United States, which restricts its use to certain areas, and requires permits.

Currently, 47 countries have banned the chemical; meanwhile, England has announced it will stop its production.

The Ministry of Public Health and the Ministry of Agriculture and Cooperatives have evidence of its impacts on human and animal health.

Despite that, the Department of Agriculture under the ministry has spoken out against a ban, saying policy-makers need to consider more reliable research and that such a ban would increase farm production costs by 40 billion baht annually.

But a good example of deteriorated soil caused by the heavy herbicide use in farming zones can be seen in Ratchaburi province.

In 1989, a person donated around 800 rai of land in Photharam district to the King. It was originally a maize and tapioca plantation site.

No one knew how long the plantation had been there. But according to local farming practice, they sprayed the herbicide before planting to kill grass and weeds.

The soil was dry and in poor condition.

The king took a natural approach to rehabilitating the land by leaving it idle for over 20 years, and slowly, small trees began to grow. The trees helped keep in the soil the water left there by rainfall, and a pond on site finally turned into natural water storage area.

By this means, the land was retrieved and turned successfully into a forest. It is a perfect demonstration site for many projects, including a vetiver grass research project. These days it serves as an important learning centre for natural rehabilitation procedures.

The land took 20 years to rehabilitate fully. So, can the authorities really be so sure that paraquat poses no danger?

Most consumers don't know how to use it correctly and safely. The large scale of single-crop plantations means farmers usually kill grass and weeds by using herbicide, as using machines or human labour is expensive. But the important point is that the soil accumulates poisons from the herbicide. People eat the plants grown on the soil which means they absorb the toxins as well. Fish absorb chemicals which enter nearby pond water and pass on those toxins to consumers, and so on.

Activists have called on the government to change its policy to wean farmers off their heavy dependency on farm chemical use. According to the Social Venture Network, Thailand is the No.5 country on the list of those with the highest use of farm chemicals. Thailand's paraquat imports rose to 44,501 tonnes last year, up from 31,525 and 30,441 tonnes in 2016 and 2015 respectively, on fears of a ban which ultimately did not come about.

Herbicides, which people have absorbed directly and indirectly, are poisons which can endanger human life. 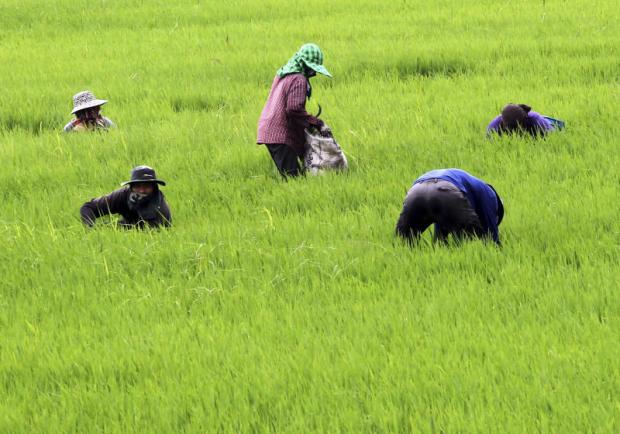 the natural method: Farmers cut grass at a rice field in Ayutthaya. The government opts for continued use of paraquat and two other major herbicides despite concerns over health risks. Photo: AP