Historical romance and heroism mark out this K-drama series, which is airing before a global audience on Netflix By Kultira Yokakul

It introduces solid and charismatic protagonists against an exotic but historic backdrop of the peninsular nation overshadowed by Japanese and Western influences from a bygone era.

As Korean television series, or so-called K-drama, particularly in the romantic comedy genre, have gained popularity in Asia including Thailand, Mr Sunshine, a period drama, works the other way around by recreating historical milestones shaped by forgotten independent fighters against the Japanese annexation of Korea in the early 1900s. 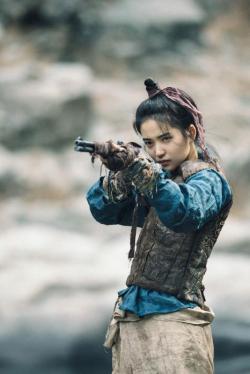 all eyes on her: Kim Tae-ri as Go Ae-shin.

The storyline is also reinforced by the Shinmiyangyo, the United States expedition to Korea in 1871.

The third collaboration by director Lee Eung-bok and screenwriter Kim Eun-sook, the duo were behind the high-flying K-dramas, Descendants of the Sun and Guardian: The Lonely and Great God, the latter widely known as Goblin, Mr Sunshine recently held its premieres on Netflix.

Starring Lee Byung-hun, lauded for his flourishing career in several K-dramas and films including I Saw the Devil in 2010 as well as Hollywood movies, and actress Kim Tae-ri from the acclaimed romantic thriller The Handmaiden in 2016, Mr Sunshine engages audiences as it depicts patriots who sacrificed their lives to fighting colonialism and those who struggled to survive amid the political turmoil of the Joseon Dynasty.

The story revolves around Eugene Choi, played by Lee, a Korean house servant who at the age of nine boarded an American warship to the US, after his slave parents were beaten to death before his eyes on the barbaric motherland of Joseon.

The young boy fought his way through various dilemmas until being commissioned as a US marine officer. Eugene, who harbours a grudge against his homeland, later returned to Joseon as a coldhearted and arrogant foreigner under a US operation.

There, he ironically falls in love with Go Ae-shin, played by Kim, an aristocrat's daughter who devotes her soul to the sovereignty of the nation.

Depicting the heart-rending experiences of people from all walks of life who stood up against the invasion in that era, director Lee Eung-bok said his latest period drama was created in tribute to those unremembered heroes who fought until the end despite the awareness of their pending defeat.

"I want to be respectful to those people who lived this era fiercely and did their best to live on," he said.

With little evidence left behind, Lee admitted it was a tough task to conjure up historical events and reconstruct aged-old backdrops hailing from that era.

He and his production team had to delve into archives and anecdotes kept by both Korea and the US.

Lee recounted that he and his team roamed across several cities to seek out perfect filming locations. Of the elaborately-crafted massive sets in Mr Sunshine, several were real historical sites while others were rebuilt based on archival materials in their hands.

"A lot of sets were recreated and we have to make them look as real as possible based on historical records and architecture in the early 1900s. It was fortunate for us that several architectural structures in that period are preserved to this day," he said.

Yet Lee said he did not pay heed to only aesthetic needs but more importantly each character in his drama had to fit in with the backdrops.

Lee said even though Mr Sunshine would initially target Korean fans, he believed foreign viewers would be drawn to the drama as many share a sense of colonialism as common ground despite little knowledge of Korean history.

"Looking back in the past, several countries were once invaded by other nations. To be honest, we have never thought of the foreign market but if you look at our main characters, patriots who fought for their own countries, a lot of people overseas can relate themselves to that context," he said.

He said he was grateful for the success of Descendants of the Sun and Goblin, which paved the way for his reunion with the talented scriptwriter in Mr Sunshine.

For nearly a decade, the South Korean actor carved out his acting career in Hollywood projects. He portrayed T-1000 in Terminator Genisys in 2015, Han Cho Bai, a key villain in Red 2 in 2013 and Storm Shadow in G.I. Joe: The Rise of Cobra in 2009 as well as its sequel G.I. Joe: Retaliation in 2013.

This drama is also rising star Kim Tae-ri's small-screen debut after the adulation of her role as a young maid in The Handmaiden.

In his return to the period drama as a protagonist who despises his own country, Lee said Eugene Choi was a unique character as it was his first time playing a Korean-turned American in a K-drama. His character was distinctive in that he is not a patriot. Instead, Eugene has a deep hatred of the land of Joseon.

"I have to speak English, Korean and Japanese. So it's a very interesting mix," he said.

Despite the nine-year break from TV screens, Lee said he has always been receptive to opportunities to partake in great projects.

From Lee's perspective, he said writer Kim Eun-sook had her own unique language to deliver her ideas and intentions although some critics said her scripts tend to go overboard.

The actor admitted that strange and unfamiliar feelings arose when he first went through the script but those sensations gradually turned into curiosity about Kim's intentions behind those lines.

In the first place, he pondered whether he would be able to thoroughly discern the writer's motive behind the script. He then gradually adjusted to her style and crystalised his own way of acting nevertheless.

"There was a time that I didn't understand those lines earlier but now I get why she wrote them back then. I think she has a mysterious power as a writer. As actors, I think we should aim to deliver the intention of the writer and director," he said. 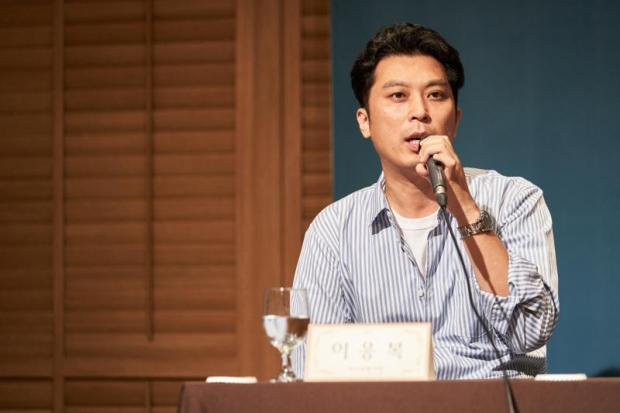 Lee believes that even if viewers do not have much knowledge about Korean history, they can still immerse themselves in the story as human relationships are a focal point in this drama.

He also praised his co-star Kim Tae-ri for her acting skill, saying when they were on set together, he was unconscious of their age disparity despite the fact that Mr Sunshine was her TV drama debut.

As female audiences have been drawn by the charm of male characters, the actor, by contrast, said the spotlight would this time shine on female characters in Mr Sunshine due to their unique and powerful personalities.

Challenged by a role as a sturdy female protagonist in her first K-drama, Kim said she felt thrilled by portraying Go Ae-shin, the 29-year-old woman who hails from an aristocratic family but on the flip side she is also an independent fighter.

The actress explained Ae-shin was a diverse and sophisticated character because it is explicit that she prioritises the autonomy of her nation but at the same time she also struggles not to give up on her social status as the nobility's daughter.

"Between these two different personalities, how can she pursue the other without destroying one aspect of her life? She lives her life like a flame. She has her own belief and fate. She isn't forced to do it but she makes her own decision and she clings to it. No matter what turmoil or storms she faces, she will always break through them and move on," the actress said.

With all of her efforts, Kim said she tried not to make Ae-shin become a two-dimensional flat character by delivering all of her varied and layered aspects, adding she would always consult the director when experiencing frustration or difficulties in playing this role.

Asked whether there was pressure to keep up with her co-star Lee on the set, Kim in fact said it was a blessing for her to work with the veteran actor.

"In acting, you need to have great chemistry between other actors. Therefore, I have tried my best to keep up with him. Also, Lee has always made me feel comfortable because of his sense of humour. So I have had a lot of fun shooting this drama," she said.

With Netflix, both leading actors said it was a new thing for both to appear in a K-drama streaming across 190 countries which means viewers from every corner of the world can watch this series simultaneously.

For Lee, this is unprecedented: "This is my first experience with this kind of global platform. Therefore, I also have high expectations and anticipation. I wonder if global viewers will be able to relate to it or digest the story."

As for Kim, she said it was difficult for her to imagine that the drama will be delivered to audiences across the world in different contexts and subtitles.

"I'm just wondering how it will turn out. How will people respond or will they be able to relate to the story. However, I know that the writer [Kim Eun-Sook] is adept at making things relatable. She has notched up several hit dramas and I'm thinking what about our project will be. I'm just as curious as you [the public and the media] are," the actress said. 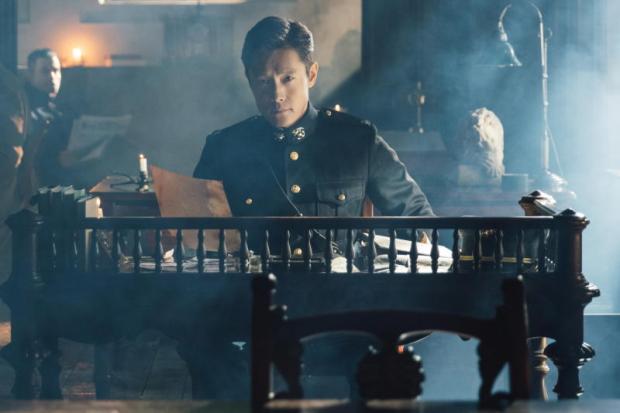 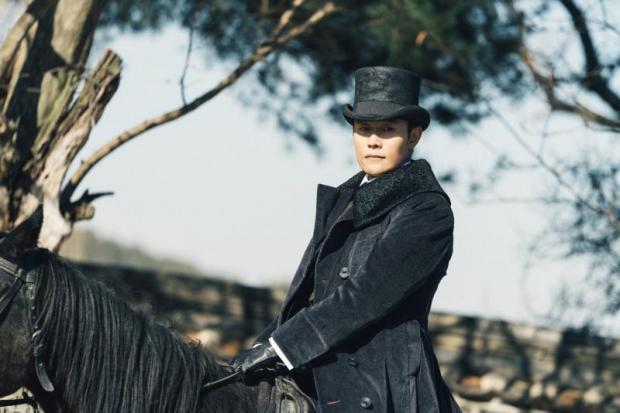